Newcastle still winless in EPL after 2-0 loss at Arsenal 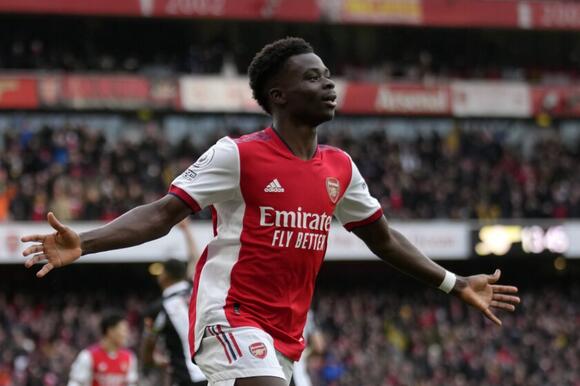 Newcastle’s winless start to the Premier League season extended to 13 games after a 2-0 loss at Arsenal on Saturday.

Bukayo Saka and the player who replaced him as a substitute, Gabriel Martinelli, scored goals in the second half to consign last-place Newcastle, which has recently come under Saudi ownership, to a seventh loss of the season.

Arsenal stayed in fifth place but is now level on points with fourth-place West Ham as the team continues its recovery from losing its opening three games of the season.

Saka ran onto a deft pass from left back Nuno Tavares and shot low and across goalkeeper Martin Dubravka into the far corner to put Arsenal ahead in the 56th minute.

Saka appeared to hurt his left leg soon after his goal and, after briefly playing on, was replaced by Martinelli in the 64th. The 20-year-old Brazilian scored within two minutes.

Sprinting onto a lofted pass from right back Takehiro Tomiyasu over the Newcastle defense, Martinelli sent a volley past Dubravka with one of his first touches of the ball.

Recently hired Newcastle manager Eddie Howe was on the sidelines for this match — he was absent for his first in charge of the club, the 3-3 draw against Brentford last week, after contracting the coronavirus — but his team barely troubled Arsenal’s defense.

Arsenal goalkeeper Aaron Ramsdale was only seriously called into action to tip a long-range shot from Jonjo Shelvey onto the bar midway through the first half.

The standout moment of the first half saw Pierre-Emerick Aubameyang somehow fail to score from barely 3 meters (yards) out, his effort on the rebound hitting the outside of the post instead.

It was inevitable that Everton would sack Rafa Benitez. In theory he was a good appointment. The reality was different. The 61-year-old has the sort of obsessive nature and organisational talents needed to untangle a club in a mess. Just not this club.Almost no one wanted him. Not the owner, not the board, not the fans. Alisher Usmanov, the main sponsor and business associate of Farhad Moshiri, was the Spaniard’s biggest advocate. Moshiri, the man with his name over Goodison’s front door, was always dubious.Benitez had committed just about the worst crime in the eyes of the Gwladys Street. He...
SOCCER・2 DAYS AGO
The Independent

Newcastle once again find themselves pitched into the thick of a battle for Premier League survival despite their new-found status as one of football’s richest clubs.With 18 games to play and having won only one of their 20 league fixtures to date, the Magpies remain entrenched in the drop zone and although they have not been cut adrift, a continuation of their current form could prove fatal.Here, the PA news agency takes a look at some of the issues facing the club’s largely Saudi-backed owners as they attempt to protect their investment and bring their vast wealth to bear.What impact...
PREMIER LEAGUE・2 DAYS AGO
The Independent

What the papers sayArsenal’s pursuit of Dusan Vlahovic has been dealt a blow, with the Daily Mail citing reports in Italy that the 21-year-old Fiorentina striker is only interested in moving to Juventus According to the Italian press, Vlahovic has already agreed terms with Juve.But Mikel Arteta and the Gunners are moving closer to signing Juventus midfielder Arthur Melo, according to The Sun. The newspaper – citing French outlet Get French Football – reports Juventus have begun talks to bring on Lyon player Bruno Guimaraes as a replacement for the 25-year-old Melo. The lack of a replacement has been...
PREMIER LEAGUE・9 HOURS AGO

Ralf Rangnick has no concerns about selecting Paul Pogba during the final months of his Manchester United contract, even if the midfielder’s only motivation to play well is to earn a deal at another club.Pogba has entered the final six month of his current Old Trafford terms, with little progress made in discussions over a renewal and a departure on a free transfer in the summer considered likely.The 28-year-old is yet to make an appearance under interim manager Rangnick after suffering a thigh injury while on international duty in November, though returned to full training on Monday.Rangnick expects Pogba...
PREMIER LEAGUE・18 HOURS AGO
The Guardian

Derby manager Wayne Rooney is in contention for an emotional return to Everton after the former England star's impressive handling of affairs on the pitch despite a financial crisis at the Championship club. Rooney is among the bookmakers' favourites to take permanent charge at Goodison Park after Rafael Benitez was sacked on Sunday. The 36-year-old made his name at Everton as a precocious teenager before rejoining his boyhood club following a glittering spell at Manchester United. And, in his short time as a manager, Rooney has offered evidence that the potential return of the prodigal son would be more than just an olive branch to Everton supporters infuriated by the dismal reign of the despised Benitez.
PREMIER LEAGUE・15 HOURS AGO
Daily Mail

Sergio Oliveira scored a penalty on his AS Roma debut as Jose Mourinho's side ended a three-match winless run by beating relegation battling Cagliari 1-0 in Serie A on Sunday. Portuguese midfielder Oliveira, who joined the capital club on loan from Porto on Wednesday, calmly converted a spot kick in the 32nd minute following a Dalbert handball.
UEFA・2 DAYS AGO

It was a comfortable afternoon for Liverpool at Anfield on Sunday as they ran out 3-0 winners against Brentford in the Premier League and you can watch the match highlights here. Despite controlling the first half, it took 44 minutes to break the deadlock when the excellent Fabinho headed home...
PREMIER LEAGUE・2 DAYS AGO
The Independent

Chelsea boss Thomas Tuchel would settle for players returning from injury and illness ahead of new signings this month.The Blues have seen their title hopes founder in recent weeks amid a raft of players being unavailable, the most difficult of which to control have been for coronavirus-related reasons.Andreas Christensen became their latest player to test positive for Covid-19 ahead of Saturday’s defeat at Manchester City.While N’Golo Kante and Thiago Silva returned from isolation, Christensen’s absence exacerbated Tuchel’s problems with Trevoh Chalobah, Ben Chilwell and Reece James still out injured and Edouard Mendy at the Africa Cup of Nations.The situation has...
SOCCER・2 DAYS AGO

Liverpool found the goalscoring alternatives needed in the absence of Mohamed Salah and Sadio Mane as their stand-ins stepped up in a 3-0 Premier League win over Brentford on Sunday. Midfielder Fabinho proved an unlikely solution with his third goal in eight days with the opener just before halftime. Alex...
PREMIER LEAGUE・2 DAYS AGO
The Independent

Everton have confirmed the appointment of Duncan Ferguson as caretaker manager.Ferguson oversaw training on Tuesday, with the club looking for a successor to Rafael Benitez after sacking the Spaniard on Sunday.The Toffees confirmed in a statement that Ferguson would be in charge “for the club’s upcoming games”, starting with the visit of Aston Villa.Ferguson will be supported in his caretaker role by John Ebbrell and Leighton Baines, along with goalkeeping coach Alan Kelly.Former Scotland and Everton striker Ferguson is set for a second spell as caretaker boss, having taken charge of three games during December 2019 following the dismissal of...
PREMIER LEAGUE・22 HOURS AGO
The Guardian

What the papers sayScotland and Aston Villa midfielder John McGinn is of major interest to Manchester United The Telegraph reports that 27-year-old McGinn is “admired” by compatriot Darren Fletcher who became technical director at Old Trafford last year. On incomings at Villa, the Daily Mail reports that the club expects to complete a loan deal for 32-year-old Roma goalkeeper Robin Olsen after a medical on Tuesday. Villa are also reportedly interested in 25-year-old Brighton midfielder Yves Bissouma.Newcastle have offered 30 million euros to Italian side Atalanta for Duvan Zapata, according to the Daily Record. The Magpies are reportedly working on...
PREMIER LEAGUE・1 DAY AGO