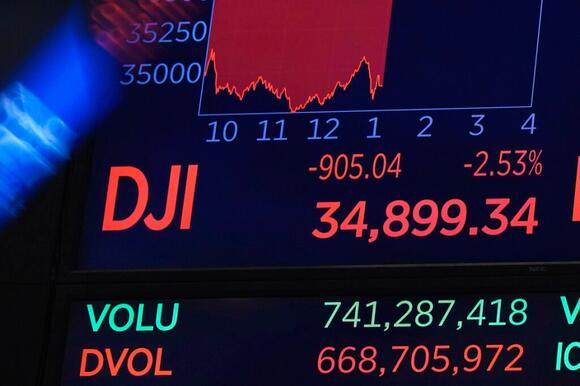 NEW YORK (AP) — Stocks closed sharply lower on Wall Street Friday, after a coronavirus variant from South Africa appeared to be spreading across the globe and the European Union proposed suspending air travel from southern Africa.

The Dow Jones Industrial Average lost 905 points. The S&P 500 index fell 2.3%, its worst day since February and the Nasdaq composite had its worst drop in two months.

“Investors are likely to shoot first and ask questions later until more is known,” Jeffrey Halley of Oanda said in a report. That was evident from the action in the bond market, where the yield on the 10-year Treasury note fell to 1.51% from 1.64% on Wednesday. As a result, banks took some of the heaviest losses. JPMorgan Chase dropped 4%.

Travel and energy stocks are among the biggest losers, with Royal Caribbean, Carnival and Norwegian Cruises all off over 10%.

There have been other variants of the coronavirus — the delta variant devastated much of the U.S. throughout the summer — and investors, public officials and the general public are jittery about any new variant that’s spreading. It’s been nearly two years since COVID-19 emerged, killing more than 5 million people around the globe so far.

Health officials in Europe and the U.K. moved quickly to propose suspending air travel from southern Africa. Meanwhile cases of the variant were found in Hong Kong, Belgium and Tel Aviv as well as major South African cities like Johannesburg.

The economic impacts of this variant are already being felt. Flights between South Africa and Europe were being subject to quarantine or being shut down altogether. Airline stocks were quickly sold off, with Delta Air Lines, United Airlines and American Airlines falling more than 10% each.

A sign of how fearful Wall Street has become was the VIX, the market’s measurement of volatility that is sometimes referred to as the market’s “fear gauge.” The VIX jumped 49% to a reading of 27.75, its highest reading since January before the vaccines began to be widely distributed.

Fearful of more lockdowns and travel bans, investors moved money into companies that largely benefited from previous waves, like Zoom Communications for meetings or Peloton for at-home exercise equipment. Peloton shares were up 4% while Zoom was up roughly 9%.

Shares in the coronavirus vaccine manufacturers were among the biggest gainers as well. Pfizer shares rose nearly 5% while Moderna shares jumped 23%.

Merck shares were down 4%, however. While U.S. health officials said Merck’s experimental treatment of COVID-19 was effective, data showed the pill was not as effective at keeping patients out of the hospital as originally thought in the data.

Investors are worried that the supply chain issues that have impacted global markets for months will worsen. Ports and freight yards are vulnerable and could be shut by new, localized outbreaks.

“Supply chains are already stretched,” said Neil Shearing, an economist with Capital Economics in London. “A new, more dangerous, virus wave could cause some workers to temporarily exit the workforce, and deter others from returning, making current labor shortages worse.”

Stock trading the Friday after Thanksgiving is typically the slowest day of the year, with the market closing at 1 p.m. Eastern. The light trading could exacerbate any of Friday’s losses with fewer buyers and sellers.

Every infection provides a chance for the virus to mutate, and omicron has an edge over its predecessors: It spreads way faster despite emerging on a planet with a stronger patchwork of immunity from vaccines and prior illness.
SCIENCE・1 DAY AGO
WATE

“We can’t absorb that cost and still meet wage demands, increased cost of goods in our tins and boxes, and afford to live as a family,” said one pie shop owner.
KNOXVILLE, TN・6 HOURS AGO
WATE

Exactly how much snow did you get? The National Weather Service Morristown has released its snowfall analysis detailing the total snow accumulation in areas across East Tennessee.
MORRISTOWN, TN・2 HOURS AGO
MarketWatch

Get ready for the climb. Here’s what history says about stock-market returns during Fed rate-hike cycles.

As it turns out, during so-called Federal Reserve interest rate-hike cycles, which we seem set to enter as early as March, the U.S. stock market tends to perform strongly, not poorly.
STOCKS・1 DAY AGO

A sell-off is a good opportunity to buy shares of these three companies.
STOCKS・9 HOURS AGO
The Motley Fool

Some incredibly promising companies are trading at huge discounts.
STOCKS・1 DAY AGO
The Motley Fool

Shares were mixed in Asia on Monday after China reported that its economy expanded at an 8.1% annual pace in 2021, though growth slowed to half that level in the last quarter.Tokyo, Shanghai and Sydney rose, while Hong Kong and Seoul declined. The weakness in China's economy toward the end of 2021 is prompting suggestions Beijing should intervene to prop up growth with interest rate cuts or by injecting money into the economy through public works spending.Shortly before the growth data were released, the Chinese central bank announced a rate cut on medium-lending to commercial banks to the lowest...
ECONOMY・18 HOURS AGO
The Motley Fool

The tech sector is having a rough couple of months, but top Wall Street firms have identified some enticing opportunities.
STOCKS・2 DAYS AGO
The Motley Fool

Bitcoin could still fall further, but it's the longer term that matters.
BUSINESS・6 HOURS AGO
The Motley Fool

These supercharged tech stocks can go against the grain and reward investors.
STOCKS・10 HOURS AGO
The Motley Fool

These fast-growing stocks from the ETF guru's portfolios could make investors rich over the coming decade.
STOCKS・9 HOURS AGO
The Motley Fool

Netflix is one of many big companies stepping up to the earnings plate over the next few trading days.
STOCKS・1 DAY AGO
The Motley Fool

These three dividend stocks are poised to thrive over the long term.
STOCKS・1 DAY AGO
The Independent

The FTSE 100 struck its latest pandemic high after it was lifted by strong trading in Asia and a leap for pharmaceutical giant GlaxoSmithKline (GSK).GSK was among the strongest on the index after weekend confirmation that fellow FTSE firm Unilever had a roughly £50 billion approach for its consumer health business knocked back.Unilever investors were less happy about the news, but the takeover interest helped boost the price of other listed consumer firms.London’s top flight ended the day 68.28 points, or 0.91%, higher at 7,611.23 points.Michael Hewson, chief market analyst at CMC Markets UK, said: “It’s been a quiet but...
STOCKS・3 HOURS AGO
The Motley Fool

Worried about fighting the Fed? Don't miss out on these potentially explosive stocks.
STOCKS・2 DAYS AGO