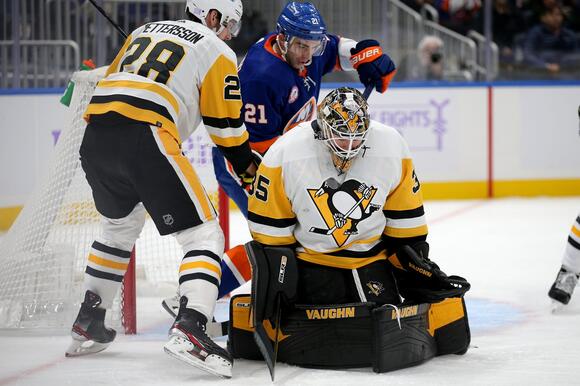 PITTSBURGH (93.7 the Fan) The New York Islanders’ UBS Arena wasn’t having a Black Friday sale on goals, but the Pittsburgh Penguins managed to collect another victory on Long Island.

The Penguins win 1-0 over the Islanders and Tristan Jarry picks up his third shutout in five games.

Just prior to puck drop, Bryan Rust was a late scratch and was filled in by Brian Boyle.

In a post game presser, head coach Mike Sullivan said Rust is being evaluated for a lower-body injury and there is not further information available.

Rust’s linemate Jake Guentzel said that Rust fell during pregame warmups and that could be behind the late scratch.

Islanders goalie Ilya Sorokin had a couple of great saves, and he would get a few more through the rest of the game.

Over half way through the game, there was no goals or penalties between the two rivals.

The Penguins and Islanders have both struggled on the power play this season; The Penguins went into their previous game with the league’s worst power play percentage, the Islanders took over that spot heading into this game.

The Penguins do, however, have the league’s top penalty kill.

Kasperi Kapanen, who again hit a goal drought, scored the games only goal in the second period, his fifth of the season.

As tensions rose in the third period, the Islanders and their “Identity Line” tried but failed to beat up on Jarry and the Penguins; They also failed to score a goal.

The Islanders and the Identity Line have now lost eight in a row, still winless in their new arena.

The Penguins on the other hand, now sitting on a five game win streak return home to host the also very bad Montreal Canadiens.

Clark Gillies, a Hockey Hall of Famer and four-time Stanley Cup winner with the Islanders, has died at 67.
NHL・2 DAYS AGO
USA TODAY

P.K. Subban said he felt accountability to call out recent racist actions in hockey because he has established a platform to inspire better behavior.
NHL・19 HOURS AGO
San Diego Union-Tribune

BOSTON (AP) — Troy Terry scored his team-leading 23rd goal, Ryan Getzlaf had a goal and set up another, and the Anaheim Ducks cooled off the Boston Bruins with a 5-3 victory Monday night. Isac Lundestrom, Derek Grant and Greg Pateryn also scored for the Ducks, who won for the fourth time in 11 games. John Gibson made 23 saves and Hampus Lindholm had three assists. David Pastrnak scored his 20th goal for Boston, with 12 coming in 13 games this month. Taylor Hall added a power-play goal and Erik Haula scored late for the Bruins, who had gone 10-2 since New...
NHL・8 HOURS AGO
Sportsnaut

Vegas Golden Knights winger Reilly Smith is one of the hottest names leading up to the NHL trade deadline. With
NHL・17 HOURS AGO
San Diego Union-Tribune

Leon Draisaitl had two goals and two assists, Evan Bouchard also scored twice and the Edmonton Oilers came from behind to snap a seven-game losing streak with a 5-3 victory over the Calgary Flames
NHL・2 DAYS AGO
Sportsnaut

Rasmus Ristolainen made his return to Buffalo on Saturday for his first career game against the Sabres. Paul Hamilton has more on his return, plus some postgame thoughts on Buffalo’s 6-3 win over the Flyers:
NHL・2 DAYS AGO
San Diego Union-Tribune

Justin Faulk had a goal and an assist and the St. Louis Blues beat the undermanned Vancouver Canucks 3-1
NHL・1 DAY AGO
San Diego Union-Tribune

BOSTON (CBS) — The Bruins will be a little shorthanded along the blue line as they wrap up a seven-game homestand. Defenseman Matt Grzelcyk will be sidelined on Monday night when the B’s welcome the Anaheim Ducks to TD Garden. Grzelcyk briefly left Saturday’s win over the Jets after being sent into the boards by Winnipeg’s Pierre-Luc Duboius in the first period. He did return to the game and finished with 13:35 of ice time, and was credited with an assist on David Pastrnak’s game-winning goal in the third period. Head coach Bruce Cassidy was cautiously optimistic that Grzelcyk avoided a serious...
NHL・18 HOURS AGO

The Pittsburgh Penguins are surging at the season's halfway point, but head coach Mike Sullivan says there is more work to be done
NHL・17 HOURS AGO
milehighhockey.com

Continuing on the home stand the Colorado Avalanche hosted the Chicago Blackhawks for the final time this season and walked away with a 2-0 victory. While the slow starts are becoming an alarming theme the Avalanche just keep finding ways to win on the back of Pavel Francouz’s second straight shutout and 16th consecutive win on home ice at Ball Arena.
NHL・6 HOURS AGO
Sportsnaut

The Florida Panthers, who are tied for the NHL lead with 61 points, have one glaring flaw. It’s their road
NHL・16 HOURS AGO
Chicago Tribune

Kevin Lankinen is back on the shelf seemingly as quickly as he returned. The Chicago Blackhawks placed the backup goalie on injured reserve Sunday with a right hand injury a day after he made 40 saves during a 4-3 overtime road loss to the Minnesota Wild. Lankinen appeared in each of the Hawks’ last two games, his first action since returning from COVID-19 protocols. Before that, his last ...
NHL・1 DAY AGO

Ryan Pulock has now missed 22 games and counting with a lower body injury, but if there’s a silver lining to his absence, Peter Schwartz writes that it’s the emergence of Robin Salo and Noah Dobson.
NHL・15 HOURS AGO