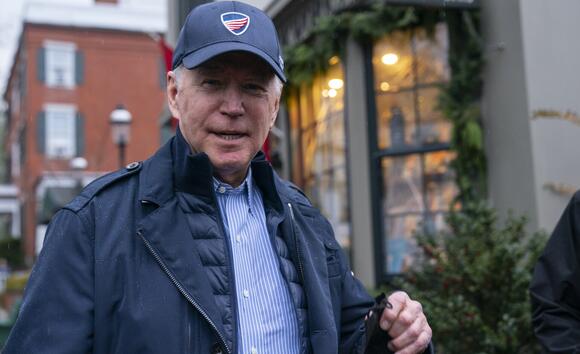 President Joe Biden’s decision to impose additional air travel restrictions on South Africa and seven other countries in response to a new COVID-19 strain is being contrasted with his response to similar policies under former President Donald Trump.

Biden issued a proclamation Friday night saying Washington would “suspend and restrict the entry into the United States, as immigrants and nonimmigrants, of noncitizens” from the eight African nations effective Monday, though he mentioned the decision in a previous statement hours earlier in the day after Thanksgiving.

“As a precautionary measure until we have more information, I am ordering additional air travel restrictions from South Africa and seven other countries,” Biden said in the statement sent by the White House. “These new restrictions will take effect on November 29. As we move forward, we will continue to be guided by what the science and my medical team advises.”

WHY BIDEN CAN’T GET RID OF HARRIS

Biden was among the Democratic leaders who responded with criticism to Trump’s restrictions on travel from China, where the virus originated.

"We are in the midst of a crisis with the coronavirus," Biden tweeted early last year while still a candidate. "We need to lead the way with science — not Donald Trump’s record of hysteria, xenophobia, and fear-mongering. He is the worst possible person to lead our country through a global health emergency."

Biden also said a "wall" and bans on travel would not stop the virus.

Many on social media were quick to note Biden's original tweets when this latest move was announced.

Biden later argued he was referring to Trump’s overall history of inflammatory comments about foreign countries and their nationals, not the China travel ban itself. Similarly, other Democrats contended that Trump’s order curbing travel from seven Muslim-majority countries dealing with terrorism could not be separated from his rhetoric about a broader ban on Muslim immigration during the 2016 campaign.

Only on Nov. 8 did the Biden administration loosen restrictions on European travelers to allow those with proof of vaccination and a negative test entry into the U.S. The White House has also caught criticism from some liberals for continuing to turn away migrants at the border under the Trump-era COVID-19 rule Title 42.

“Except for American citizens who are able to come back,” Biden told reporters on Friday. “We don't know a lot about the variant except that it is of great concern. It seems to spread rapidly. I spent about a half hour this morning with my COVID team led by Dr. Fauci, and that was the decision we made.”

Democrats maintain there is no comparison between Trump, whose comments about foreigners elicited criticism from the moment he described rapists coming across the border from Mexico in his 2015 campaign announcement speech, and Biden on foreign travel restrictions.

President Joe Biden expressed disbelief at former President Donald Trump's hold on the Republican Party, claiming to have spoken to at least five GOP senators who are afraid of clashing with his predecessor. “Did you ever think one man out of office could intimidate an entire party where they’re unwilling...
PRESIDENTIAL ELECTION・10 HOURS AGO
WashingtonExaminer

Freshman Rep. Kat Cammack took to the House floor on Wednesday to define the Biden administration’s first year as “a disaster from top to bottom.”. Speaking next to a "Biden’s Broken Promises" poster, the Florida Republican detailed how President Joe Biden’s agenda has negatively affected the country.
FLORIDA STATE・14 HOURS AGO
WashingtonExaminer

Trump interview: Biden’s failed and America wants ‘to go back to the past’

Former President Donald Trump tonight brushed aside President Joe Biden’s bravado about his first year in office, claiming that people are eager for a border, economy, and nation the way he left it.
PRESIDENTIAL ELECTION・9 HOURS AGO
The Independent

One year after President Joe Biden raised his right hand to swear the presidential oath of office, more Americans disapprove of his performance and believe their country is on the right track than at any point since his term began.Of the 2,005 registered voters surveyed by Morning Consult and Politico, more than half – 56 per cent – either somewhat or strongly disapprove of the job Mr Biden has done in his first year as America’s chief executive, with just 16 per cent strongly approving of his performance and a quarter of respondents approving of his work somewhat. Worse yet...
PRESIDENTIAL ELECTION・16 HOURS AGO

Biden Made 210 More Executive Actions Than Trump on Immigration in His First Year: Report

"Given this pace of activity, why does the perception exist that the Biden administration has done little on immigration?" the Migration Policy Institute said.
PRESIDENTIAL ELECTION・14 HOURS AGO
Newsweek

Political expert: Biden has not fully met his expectations 1 year into presidency

Thursday will mark one year since President Joe Biden was sworn into office.
PRESIDENTIAL ELECTION・6 HOURS AGO

President Joe Biden acknowledged Wednesday that the pandemic has left Americans exhausted and demoralized but insisted at a news conference marking his first year in office that he has “outperformed” expectations.
PUBLIC HEALTH・9 HOURS AGO
AFP

Joe Biden sought to reset his presidency in a marathon first year press conference Wednesday, vowing to reconnect with voters and touting successes, while delivering blunt assessments of the "disaster" facing Russia if it attacks Ukraine. Biden said he was ready to meet with Putin and bluntly warned the Kremlin leader that an attack on Ukraine would be "a disaster" for Russia.
PRESIDENTIAL ELECTION・4 HOURS AGO
WashingtonExaminer

President Joe Biden said Wednesday he pressed Chinese leader Xi Jinping about the origins of COVID-19 during their lengthy November phone call, a revelation that comes after two months of the White House refusing to say if Biden had raised the critical concern. During his first White House press conference...
PRESIDENTIAL ELECTION・7 HOURS AGO
The Guardian

President Biden concludes his first year in office with the second-lowest approval rating of any President's freshman year at the White House.
PRESIDENTIAL ELECTION・2 HOURS AGO
AFP

One year on, the verdict on Biden's Divided States of America

When Joe Biden became president, he inherited an America divided in almost every conceivable way, promising to be a force for unity and reconciliation.  "So I don't think that Joe Biden has necessarily made us more united but I think he has prevented it from being worse."
PRESIDENTIAL ELECTION・1 DAY AGO
The Independent

In a self-appraisal that didn't always fit with the facts, President Joe Biden on Wednesday made the dubious assertion that he's outperformed all expectations on the pandemic in his first year and inflated his contribution to COVID-era economic growth.A look at some of Biden's comments in a news conference that stretched for nearly two hours:PANDEMICBIDEN on COVID-19: “I didn’t overpromise. I have probably outperformed what anybody thought would happen.”THE FACTS: That's a stretch. The month before the election, he vowed: “I’m going to shut down the virus, not the country.” The pandemic is obviously far from being shut...
PRESIDENTIAL ELECTION・8 HOURS AGO
Business Insider

"Things are not going well," Romney said Sunday of President Joe Biden's tenure. "And the president needs to stop and reset."
PRESIDENTIAL ELECTION・3 DAYS AGO

Puzzle of Biden’s unpopularity has some pieces within his control and some not, experts say, as Covid casts a shadow over his first year in office
PRESIDENTIAL ELECTION・2 DAYS AGO
News 8 WROC

By the numbers: Stats that tell story of Biden’s first year

32 “not a joke" references. It's one of Biden's favorite speech lines.
PRESIDENTIAL ELECTION・2 DAYS AGO
Newsweek

Biden overpromising and underdelivering on COVID-19 could come back to hurt Democrats in the midterms.
PRESIDENTIAL ELECTION・5 DAYS AGO
Los Angeles Daily News

Biden’s not Trump, but that’s no longer good enough

SACRAMENTO – To provide an idea of how disastrous the Joe Biden presidency has been after a year, consider the latest news from the Wall Street Journal. Hillary Clinton, who is one of the least popular and most annoying political figures in our country, is plausibly considering a comeback presidential run to fill “a leadership vacuum in the party.”
PRESIDENTIAL ELECTION・5 DAYS AGO