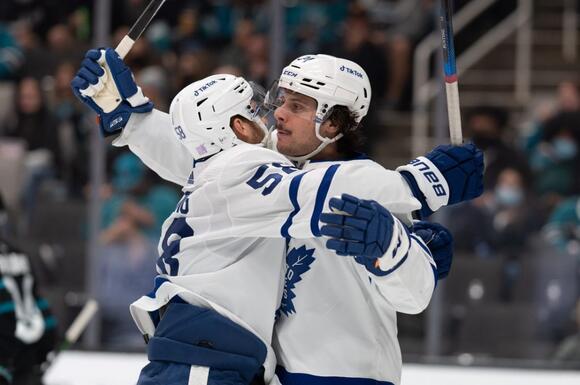 William Nylander and Wayne Simmonds each scored in the opening six minutes Friday and the visiting Toronto Maple Leafs continued their hot run with a 4-1 victory over the San Jose Sharks.

Auston Matthews and John Tavares also scored as the Maple Leafs won for the 13th time in their last 15 games going back to Oct. 27. Toronto also won its sixth consecutive road game.

Maple Leafs goalie Joseph Woll had 34 saves in his third career game as Toronto has won the first three games on a four-game road trip that ends Sunday at Anaheim.

Nick Bonino had a goal for the Sharks, with the score also coming in the opening six minutes. San Jose lost after posting consecutive victories this week and has not won three consecutive games since opening the season 4-0-0.

Sharks goalie James Reimer gave up four goals on 17 shots and was pulled with 9:16 remaining in the second period. He was replaced by Adin Hill, who went on to make 16 saves.

Nylander took a touch pass from Tavares at the top of the right circle and scored 32 seconds into the game. The goal was his eighth of the season.

The Sharks got even 1-1 at 4:44 of the opening period when Bonino scored for the second consecutive game, also his second goal in a Sharks uniform.

The Leafs went back on top 2-1 a mere 32 seconds later when Simmonds delivered his second of the season and his first since Oct. 16.

Toronto’s victory avenged a 5-3 defeat at home to San Jose when they were on a four-game losing streak that preceded their current 15-game hot stretch.

In the spirit of the holiday season, PHR will take a look at what teams are thankful for as the season approaches the midway mark. There also might be a few things your team would like down the road. We’ll examine what’s gone well in the early going and what could improve as the season rolls on for the Toronto Maple Leafs.
NHL・2 DAYS AGO
FanSided

Should the Toronto Maple Leafs Trade Petr Mrazek This Year?

He’s only played four games for the Toronto Maple Leafs, but should the team cut ties with Petr Mrazek already?. For a salary-cap strapped team, $3.8M for the next two seasons is a lot of money for the Toronto Maple Leafs to pay Petr Mrazek. He’s the eighth-highest paid player on the team, their most expensive goaltender and is clearly a back-up.
NHL・2 DAYS AGO
FanSided

Remember Peter Zezel? I remember him as the checking line centre that helped the Toronto Maple Leafs to back-to-back Conference Finals in 1993 and 1994 with his strong defensive abilities and face-off skills. Those were the years that made me a Toronto Maple Leafs fan when I was a kid....
NHL・2 DAYS AGO
FanSided

The Toronto Maple Leafs have every right to be angry right now as two of their top players, John Tavares and William Nylander failed to make the All-Star team cut. Tavares and Nylander (among other members of the Toronto Maple Leafs) join a growing list in an abundantly talented Atlantic division that misses the All-Star game through no fault of their own.
NHL・2 DAYS AGO

The bruise on Alex Iafallo’s leg says a lot about how the Los Angeles Kings are performing lately. The Kings
NHL・20 HOURS AGO
Sportsnaut

The NHL season officially started back on October 12. In this article, we track all the NHL games today as
NFL・5 HOURS AGO

Kevin Durant injured his knee during the game between the New Orleans Pelicans and Brooklyn Nets.
NBA・1 DAY AGO
San Diego Union-Tribune

Josh Norris scored twice, including the tiebreaking goal as the Ottawa Senators tallied five times in the third period to rally past the Edmonton Oilers 6-4
NHL・1 DAY AGO
Sportsnaut

Chicago Blackhawks defenseman Calvin de Haan was fined $2,500 by the NHL on Friday for a dangerous trip against Montreal
NHL・2 DAYS AGO
Sportsnaut

The Golden State Warriors beat the Chicago Bulls on Friday night in Illinois, and during the game, Andre Iguodala had an incredible pass.
NBA・2 DAYS AGO
Sportsnaut

The shorthanded Bulls have a three-game losing streak for the first time this season, but rookie guard Ayo Dosunmu has emerged as a bright spot, writes Darnell Mayberry of The Athletic. Making his third start, Dosunmu posted his first career double-double Saturday night with 21 points and 10 assists in a narrow loss to the Celtics.
NBA・14 HOURS AGO
Sportsnaut

The jersey retirement ceremony will take place on the anniversary of his NHL debut.
NHL・20 HOURS AGO
WFAN Sports Radio

Rangers highly touted prospect Braden Schneider looks back on his day leading up to his NHL debut and his first career goal on Thursday night.
NHL・3 DAYS AGO