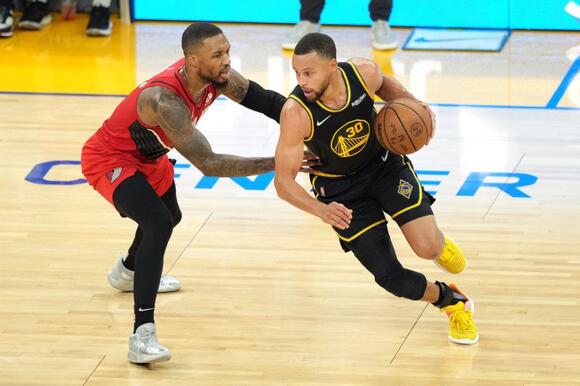 The NBA’s winningest home team and one of its losingest road clubs followed their season-long forms Friday night when Stephen Curry’s game-high 32 points led the Golden State Warriors to a 118-103 victory over the visiting Portland Trail Blazers in San Francisco.

The win was the Warriors’ 10th straight at home, with each of the 10 coming by 10 or more points.

Meanwhile, the Trail Blazers fell to 1-9 on the road with a third consecutive loss away from home, their second in three nights to begin a three-game trip.

Golden State led by as many as 21 points before Portland, getting three rapid-fire 3-pointers from Anfernee Simons, rallied within striking distance at 96-88 on a Larry Nance Jr. dunk with 6:39 to play.

But Andrew Wiggins countered with a pair of interior hoops and Curry bombed in his fifth and sixth 3-pointers of the night, allowing Golden State to extend the margin to 14 before coasting home.

Curry dominated his personal duel with San Francisco Bay Area native Damian Lillard, who shot just 5 for 15 on a 16-point night. Curry made 12 of his 25 shots while also finding time for eight assists and seven rebounds.

Wiggins shot 9 for 15 in a 22-point performance, while Jordan Poole finished with 14 points, and Draymond Green and Kevon Looney chipped in 12 apiece.

Looney made six of his seven shots, helping the Warriors outshoot the Trail Blazers 54.0 percent to 41.9 percent.

Simons wound up 5 for 10 on 3-pointers and 7 for 13 overall en route to a team-high 19 points off the bench for Portland, which lost its second straight in the wake of a four-game winning streak.

Jusuf Nurkic had 17 points, CJ McCollum 16 to go with a team-high seven rebounds and Norman Powell 15 points before leaving the game in the third quarter with a knee injury.

Lillard complemented his 16 points with a team-high six assists.

The Golden State Warriors are hosting the Detroit Pistons on Tuesday evening, and the Warriors shared an awesome photo of Klay Thompson and Steph Curry.
NBA・1 DAY AGO
ESPN

Analysis and bets for Tuesday's games featuring the Timberwolves visiting the Knicks and the Warriors welcoming the Pistons.
NBA・2 DAYS AGO
Sports Illustrated

First-place Phoenix travels to take on a surging Dallas team and Indiana draws Golden State on the second night of a back-to-back.
NBA・8 HOURS AGO

LeBron James has overtaken Stephen Curry in All-Star Game fan voting, and if Curry doesn't mount a massive comeback in the next couple of days, there will once again be a Team LeBron in Cleveland. In the third voting returns, released Thursday, James leads Curry for the top spot by...
NBA・6 HOURS AGO
NBA

During their last championship run in 2014, the San Antonio Spurs lived by the motto of “Good to great” — a concept that you give up a good shot in order to get a great shot for a teammate — and even had the words engraved in their championship rings. It is a philosophy of unselfishness and teamwork that could be seen on the court every night with a beautiful display of passing, cutting, more passing and eventually an open layup, dunk or jump shot.
NBA・8 HOURS AGO
Sportsnaut

Bookmark. Save. Do your thing. We will be providing constant updates on this page as it relates to the biggest
NBA・2 DAYS AGO
FanSided

While the Boston Celtics have been on somewhat of a hot streak through the first half of January, winning six of their10 games played thus far into 2022, for the most part, it has appeared as though with every positive step forward this team takes they end up following it up by then taking two steps back and now, as a result of Wednesday’s underwhelming loss to the Charlotte Hornets, they find themselves back to boasting just a measly .500 record of 23-23.
NBA・10 HOURS AGO

Lakers Fans Blast Team After Getting Beaten By Pacers: "Please Trade LeBron Out Of Respect."

The Los Angeles Lakers have recently lost to the Indiana Pacers 104-111, and there is no doubt that this was a game that they should have won. This was certainly a disappointing loss for a team that was looking to build momentum. LeBron James once again had a fantastic performance...
NBA・20 HOURS AGO
95.7 The Game

Russell Westbrook gets nasty early and Stanley Johnson delivers late as the Lakers earn a 101-95 win over the Utah Jazz on Monday at Crypto.com Arena.
KENDRICK NUNN・2 DAYS AGO

Jonathan Kuminga has golden opportunity while Draymond Green is out

The Warriors are excited about rookie Jonathan Kuminga, who will remain a starter in the foreseeable future as Draymond Green recovers from his injury.
NBA・1 DAY AGO
FastBreak on FanNation

San Francisco, CA – For most of the season, the Golden State Warriors have been the best team in the NBA. Largely because of the amount of chemistry the squad has displayed on a nightly basis. Now, as we get closer to the second half of the season, the Warriors are going through a rough patch.
NBA・1 DAY AGO
USA TODAY

Bookmark. Save. Favorite. Do your thing. This is the one-stop-shop for everything NBA schedule-related heading into the 2021-22 season: Get
NBA・14 HOURS AGO
fadeawayworld.net

Michael Jordan is perhaps, the biggest legend in the history of the NBA. Jordan is considered by many people as the greatest player to ever play the game of basketball. MJ is an icon, a superstar that any team would love to have had on their team. But one of his former assistant coaches once advised Phil Jackson to take him out of a game during the NBA Finals.
NBA・15 HOURS AGO
Sportsnaut

Jimmy Butler had a triple-double, and Bam Adebayo returned after missing 22 games, leading the host Miami Heat to a
NBA・2 DAYS AGO