This Is The Best Christmas Movie Of All Time 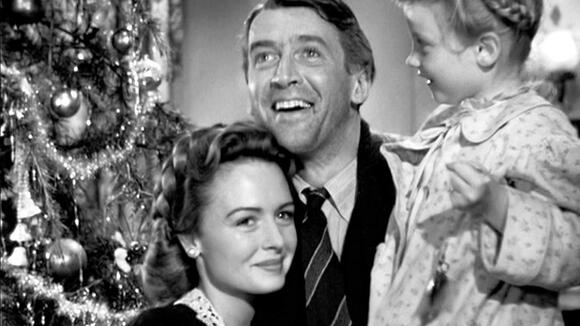 Among those we considered, there is a type of holiday film for everyone. Numerous genres are represented, ranging from action to comedy, romance, and horror. There are at least some surprises.

For example, “Die Hard” is not make our list of finalists and “Iron Man 3” is. (Bruce Willis has insisted “Die Hard” is not a Christmas movie, so we omitted it, and Marvel has officially declared the third installment of the Iron Man franchise is, so we included it.)

Among the movies we considered there is an almost perfect split between older and newer films — 23 of the 45 movies on the list were released after 2000. The older holiday flicks were released between 1938 and the late 1990s, and most of them are ranked in the top 20 of the best Christmas movies ever.

The best Christman movie ever made is It’s A Wonderful Life (1946). Here are the details:

Methodology: To determine the best Christmas movie ever made, 24/7 Tempo developed an index using average ratings on IMDb, an online movie database owned by Amazon, and a combination of audience scores and Tomatometer scores on Rotten Tomatoes, an online movie and TV review aggregator, as of November 2021. All ratings were weighted equally. Only movies with at least 25,000 audience votes on either IMDb or Rotten Tomatoes were considered. Only films in which the Christmas season plays an important role in the plot, or were otherwise identified as Christmas movies by Box Office Mojo, the Countdown Until Christmas Christmas movie database, and Vulture magazine were considered. Information on directorial credits comes from IMDb.

Click here to read The Best Christmas Movies Of All Time

This Is the Youngest Oscar Winner of All Time

This actor won a major Academy Award when she was only 10 years old, the youngest winner ever.
MOVIES・1 DAY AGO
24/7 Wall St.

The Best SNL Celebrity Host of All Time

A 24/7 Tempo analysis reveals who is the most popular guest host of Saturday Night Live.
TV & VIDEOS・6 DAYS AGO
Inside the Magic

It might not seem like that many when compared to multi-movie franchises such as Star Wars, Jurassic Park, Harry Potter, and the Marvel Cinematic Universe, but the fact that we now have four Ghostbusters movies in existence is a pretty big deal. And who knows what the future of the franchise looks like. More movies perhaps? Maybe even a live-action TV series!
MOVIES・5 DAYS AGO
Pocket-lint.com

What is the best order to watch all the Scream movies?

(Pocket-lint) - It's been a long time since we last got to catch up with Sidney Prescott and the blood-soaked whodunnits that seem to follow her wherever she goes. The wait finally comes to an end in January 2022, with Ghostface wreaking havoc once again on the big screen. So,...
MOVIES・8 DAYS AGO

The Most Memorable Gambling Movie Characters of All Time

Many movies about gambling have been made over the decades, and the characters they contain are among the most memorable in the history of cinema. To prove this once and for all, let’s take a look at some of the impactful personas to appear in gambling-focused films, and what makes them stand out so much.
MOVIES・10 DAYS AGO
Collider

From 'True Grit' to 'Fargo': The 10 Best Coen Brothers Movies of All Time

Joel and Ethan Coen have been directed feature-length movies for nearly four decades. Across that time, the duo has managed to explore a wide variety of genres all while maintaining their affinity for strange humor and a recurring affinity for subverting storytelling conventions. Along the way, they’ve managed to deliver a swarm of motion pictures that have proven unspeakably influential. Even just in terms of quotes film buffs now work into their everyday vernacular, the Coen Brothers have become icons.
MOVIES・8 DAYS AGO
GMA

The "Moon Knight" promo gave us not only Oscar Isaac's English accent but also our first glimpse at Ethan Hawke's Arthur Harrow.
TV & VIDEOS・2 DAYS AGO

The events of The Book of Boba Fett’s latest episode was overshadowed by the tease of a newly-beloved Star Wars character,Episode four of the Disney Plus series was released on Wednesday (19 January), meaning there are just two more instalments to go before the series draws to a close.While the response to Boba Fett’s standalone series has been mixed to date, the ending of the latest episode left fans feeling very excited.This wasn’t necessarily due to anything that happened within the show but thanks to a music cue namely the theme tune to The Mandalorian.Composed by Ludwig Göransson, the...
MOVIES・11 HOURS AGO
The Hollywood Reporter

Parasite Oscar winner Bong Joon Ho has found his next film. The filmmaker will write and direct an untitled sci-fi movie for Warner Bros., with actor Robert Pattinson in talks to star, The Hollywood Reporter has confirmed. The project will be based on Mickey7, a forthcoming novel from author Edward Ashton. Mickey7 is described as Andy Wier’s The Martian meets Blake Crouch’s Dark Matter. It centers on Mickey7, a man on an expedition to colonize the ice world Niflheim. This expendable employee takes jobs too risky for anyone else, and when he dies, he regenerates as a clone with most of his memories...
MOVIES・1 DAY AGO
IndieWire

Well, this is a superhero multiverse we didn’t quite expect. After reprising his role as the Green Goblin in “Spider-Man: No Way Home,” Willem Dafoe has his sights set on another comic book baddie: Batman’s nemesis, the Joker… or an “imposter” take on him. During a cover story interview with British GQ, Dafoe hinted at expanding his role in DC and Marvel films by way of a “Joker” sequel. “There is something interesting about, like, if there was a Joker imposter,” Dafoe explained. “So it would be possible to have not dueling Jokers, but someone that [claims] to be the Joker that...
MOVIES・1 DAY AGO
Deadline

Universal, Blumhouse,  Atomic Monster and Divide/Conquer AI thriller M3GAN, starring Allison Williams, will hit theaters on Friday, Jan. 13, 2023. Uni already had the date reserved with Warner Bros also having an untitled movie and Sony with J.C. Chandor’s Kraven the Hunter already on that weekend. Directed by Gerard Johnstone (Housebound) with a script by Akela Cooper (Malignant, The Nun 2) based on a story by James Wan, the pic follows Williams who plays Gemma, a brilliant roboticist at a toy company who uses artificial intelligence to develop, M3GAN, a life-like doll programmed to be a kid’s greatest companion and a parent’s greatest ally. After unexpectedly gaining custody of her orphaned niece, Gemma enlists the help of the M3GAN prototype – a decision that has unimaginable consequences. Ronny Chieng (Shang-Chi and the Legend of the Ten Rings, Crazy Rich Asians) also stars. Jason Blum and Wan produced the movie. Michael Clear and Judson Scott are EPs for Wan’s Atomic Monster. Blumhouse’s Ryan Turek is an EP. Adam Hendricks and Greg Gilreath are EPs for Divide/Conquer. Mark Katchur and Williams are also EPs.
MOVIES・1 DAY AGO

Willem Dafoe has shared an “interesting” pitch for a Joker sequel.The 66-year-old Spider-Man actor hinted at expanding his role in the Marvel and DC Universe during an interview with GQ. Sharing his thoughts about a potential “Joker imposter”, Dafoe said: “There is something interesting about, like, if there was a Joker imposter.”“So it would be possible to have not duelling Jokers, but someone that [claims] to be the Joker that isn’t the Joker.”Referring to the films tarring Joaquin Phoenix, Dafoe shared an idea of a possibly “interesting story”.“If you had Joaquin Phoenix’s Joker and then you had someone who...
MOVIES・1 DAY AGO
The Guardian

The Book of Boba Fett has resurrected the badass bounty hunter, only to destroy everything that once made him so great. It’s a fate worse than being eaten alive
MOVIES・1 DAY AGO
Time Out Global

The absolute best music videos of all time

These gems combine groundbreaking visuals and timeless music to make our list of the best music videos of all time. It’s been a long time since video killed the radio star, so all things considered, it’s kind of amazing that the music-video form is still thriving in the age of YouTube and TikTok. Now, with Beyoncé’s Lemonade and other blockbuster album-length videos on the rise, we might just be on the verge of a new music-video golden age. It’s a great time to be a fan, and it’s never been easier to cue up videos for your favorite party songs or pop songs from the comfort of your computer or phone (and there’s nothing to stop you from hitting that replay button over and over). For our money, these videos comprise the pinnacle of the art form—the best music videos of all time—so far at least.
MUSIC・3 DAYS AGO
fashionista.com

'Euphoria' Has the Best-Dressed Cast of All Time

Do you ever just get overwhelmed thinking about how remarkably cool, talented and hot literally ever member of the "Euphoria" cast is? Well, add ridiculously chic to that list. The actors behind your favorite fucked-up teens convened on a red carpet Wednesday night to celebrate the premiere of the HBO show's second season and, sartorially, there were no misses. Has television ever seen such a well-dressed cast across the board?
TV & VIDEOS・14 DAYS AGO
The Hollywood Reporter

Details have finally emerged for the (very) long-awaited sequel to Aardman’s 2000 hit Chicken Run, still the most-successful stop-motion animation film 22 years after its release, plus a first-look image. First revealed by The Hollywood Reporter in 2018 and since swooped on by Netflix, the film is set to be entitled Chicken Run: Dawn of the Nugget, will land on the streamer in 2023, and, despite featuring the same characters as the first, has cast a mostly new lineup of voice stars. Replacing Mel Gibson as Rocky the heroic rooster is Zachary Levi (a recasting of the Gibson role became known in...
MOVIES・6 HOURS AGO
The Hollywood Reporter

Denzel Washington’s passion for Shakespeare is clearly not as fleeting as, to borrow from a certain playwright, a walking shadow. The two-time Oscar winner currently stars opposite Frances McDormand in The Tragedy of Macbeth, director Joel Coen’s take on the Shakespeare staple that’s now available on Apple TV+, and for which Washington earned a SAG Award nomination. But it was 1993’s star-studded Much Ado About Nothing, directed by Kenneth Branagh (whose latest, Belfast, is in the awards race alongside Macbeth), that introduced moviegoers to the actor delivering the Bard’s lines. Washington played nobleman Don Pedro, who overcomes the villainous scheming of...
MOVIES・1 HOUR AGO
Insider

THEN AND NOW: 10 of Hollywood's most iconic scream queens

Neve Campbell is one of Hollywood's most iconic horror legends — or scream queens. Here's what 10 of the most legendary scream queens are doing now.
MOVIES・1 DAY AGO