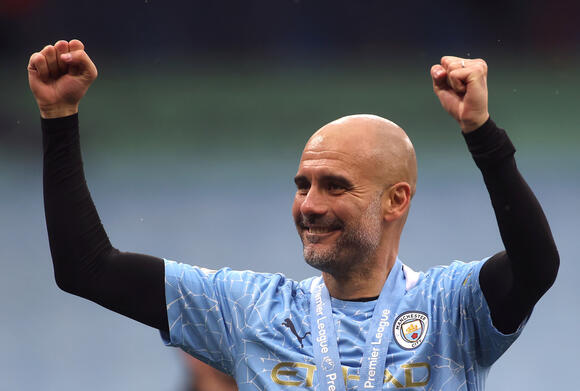 The Premier League champions are challenging on three fronts without the services of a traditional number nine, after clinching top glory largely playing a false-nine system last term.

After failing in their publicised effort to land Harry Kane from Tottenham, Ferran Torres is as close to a striker possessed by Pep Guardiola, who stuck Bernardo Silva down the middle in City's 2-1 win over PSG on Wednesday.

Last weekend, Cole Palmer was given the nod up top by Guardiola, with Ferran Torres out injured and Gabriel Jesus named amongst the substitutes against Everton, where the 19-year-old impressed despite not having a telling impact on the tie.

Previewing his side's upcoming league clash against West Ham, Guardiola doubled down on the fact that though Manchester City have proved that they have it in them to cope with the absence of a striker, the Sky Blues sometimes need a striker to find the net.

"In some games, we need guys to go in the box," said Guardiola, whose side sealed qualification to the knockout stages of the Champions League in mid-week thanks to Gabriel Jesus' second-half winner after the coming off the bench.

Guardiola added: "Gabriel (Jesus), look what happened, Gabriel was there to score the goal (against PSG) - sometimes they arrive in the right moment.

"We can play good with a striker as well. If we play with Sergio (Aguero) or Gabriel (Jesus) if he comes short for the ball, we have no striker. Against Everton, (Cole) Palmer played in the nine, and we realised we need more movement in behind."

In recent times, Manchester City’s academy has been lauded for all the right reasons. Phil Foden’s meteoric rise into becoming one of the most outstanding young players in Europe has been the finest example of the academy’s excellent work in terms of spotting local talent and taking their potential to the next level.
PREMIER LEAGUE・1 DAY AGO
CityXtra

Conceding a mere 13 goals in 22 matches so far, Manchester City have the best defensive record in the Premier League this campaign, and it's played a significant role in their dominant position in the Premier League table. A centre-back partnership of Ruben Dias and Aymeric Laporte has been Pep...
PREMIER LEAGUE・1 DAY AGO
CityXtra

Speculation around the Ukrainian left-back's future at the Etihad Stadium has always painted an uncertain picture, almost ever since his arrival at the club in the summer of 2016 from FC Ufa. Oleksandr Zinchenko has been linked with potential moves to the likes of Newcastle United and Genoa in recent...
PREMIER LEAGUE・1 DAY AGO

While Manchester City are yet to secure the final jewel in the crown of the club's modern era, the highly-coveted Champions League trophy, the club have greatly benefited from a decade of consecutive qualifications into the competition. Whether those benefits have been financial or simply the experience a club gains...
PREMIER LEAGUE・2 DAYS AGO
CityXtra

The Algeria superstar was disappointingly knocked out of the Africa Cup of Nations in the group stage on Thursday night, courtesy of a 3-1 defeat against Ivory Coast on matchday three. The defending Africa Cup of Nations champions failed to win a game across three fixtures, and Mahrez - who...
PREMIER LEAGUE・3 HOURS AGO
CityXtra

As several of the world's leading companies, football brands, and clubs announce their respective awards and rankings for the year of 2021, the number one football video game has now released their world XI from the last 12 months. After a round of voting from millions of players of FIFA...
PREMIER LEAGUE・9 HOURS AGO
CityXtra

Manchester City's midfield gem Kevin De Bruyne seems to get better and better with each passing season, with his recent match-winning strike against Chelsea to open up a 11-point lead at the top of the Premier League the latest reminder that the Belgium international is back to his best. And...
PREMIER LEAGUE・2 DAYS AGO

Mahrez has been in sensational form for the Premier League champions since the start of the campaign, with the former Leicester City star often coming up with the goods in front of goal in the absence of a natural striker in the first-team ranks at the Etihad Stadium. The 30-year-old,...
PREMIER LEAGUE・14 HOURS AGO
CityXtra

Kevin De Bruyne has been one of many midfielders who have been tasked with filling the gap in the number nine slot at the Etihad Stadium over the past year-and-a-half, alongside the likes of Bernardo Silva, Phil Foden, Ilkay Gundogan and Jack Grealish. The 30-year-old, who was named in the...
PREMIER LEAGUE・1 DAY AGO
CityXtra

This season, Phil Foden's performances have continued to hit the staggering heights that saw him emerge from the Manchester City academy at just 17 years of age. The Stockport-born midfielder is one of the first names on Pep Guardiola's teamsheet at the moment, with his technical quality pinpointed as the reason he continues to be deployed in the false nine role.
PREMIER LEAGUE・15 HOURS AGO

Given the cutthroat nature of representing Manchester City at the highest level, the club have adopted a tendency to send players on loan, in order to accelerate their development and increase their chances of first-team football. In the 2021/22 season alone, a staggering 36 players from Manchester City have been...
PREMIER LEAGUE・10 HOURS AGO
CityXtra

A comprehensive round-up of all the latest Manchester City transfer news and gossip from across the globe, after the nineteenth day of the winter transfer market. Manchester City academy star James McAtee is still wanted by Swansea City on loan in January. (Ian Mitchelmore, Wales Online) Real Betis are on...
PREMIER LEAGUE・3 HOURS AGO
CityXtra

Riyad Mahrez's desire to avoid a premature return to Manchester could not be fulfilled as Algeria suffered their third group-stage loss to surrender their Africa Cup of Nations crown after a disappointing tournament for Djamel Belmadi's side. While Manchester City have not overly missed the former Leicester man in their...
PREMIER LEAGUE・6 HOURS AGO
CityXtra

Zinchenko has often been speculated with various moves away from Manchester City, but his six-year association with the club has continued to this day, largely down to the former FC Ufa prospect's relentless drive to improve. While his game may not be as glamorous as some of the flair players...
PREMIER LEAGUE・2 DAYS AGO
CityXtra

The current league leaders will be looking to further strengthen their grip on retaining the Premier League crown this weekend, as they travel south to take on a threatening Southampton side at St Mary's. The match represents another opportunity for Pep Guardiola's squad to further extend their lead over title...
PREMIER LEAGUE・1 DAY AGO
CityXtra

As Manchester City have the benefit of full midweek breaks in between matches at present, many of Pep Guardiola's squad are making the most of their time off when away from the City Football Academy. Several members of the squad live in Manchester city centre, and are often spotted enjoying...
PREMIER LEAGUE・7 HOURS AGO
CityXtra

The City Football Group-owned clubs have proved to be a temporary home for several developing prospects at Manchester City, such as the likes of Pablo Maffeo, Marlos Moreno and Yan Couto in the recent past. With the umbrella company holding stakes in nine different clubs in different leagues around the...
PREMIER LEAGUE・14 HOURS AGO
CityXtra

Following Manchester City’s early elimination from the 2021/22 Carabao Cup, the Premier League champions are now set to have a two-week break after facing Southampton in the Premier League this weekend. It was originally reported by the Telegraph’s Mike McGrath that Pep Guardiola had planned a warm-weather training camp...
PREMIER LEAGUE・2 DAYS AGO