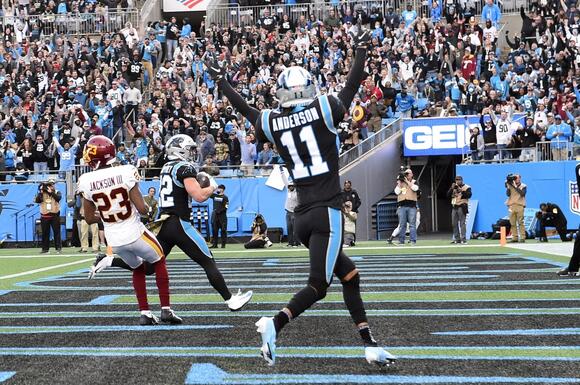 Discover player props odds, plays, and insights for Robby Anderson in his Week 12 contest with the Carolina Panthers against the Miami Dolphins.

Bookmakers have listed player props for Robby Anderson ahead of his next NFL game on Sunday at 1:00 PM ET airing on FOX. Anderson and the Carolina Panthers (5-6) hit the field against the Miami Dolphins (4-7) in Week 12 at Hard Rock Stadium.

Nick Saban ditching the NFL for Alabama makes for one an epic "what if?" scenario in coaching history. Let's look back at why Saban left the Miami Dolphins.
NFL・18 HOURS AGO
Sportsnaut

NFL TV ratings, a look forward: The NFL Playoffs have arrived, following a 2021 regular season that saw interest in
NFL・2 DAYS AGO

Can the Tampa Bay Buccaneers win back-to-back Super Bowls? Find out how the 2021 schedule sets up nicely for Tom Brady and Co. to make another title run.
NFL・2 DAYS AGO
Sportsnaut

Super Bowl 2022: The Tampa Bay Buccaneers are the reigning NFL champions, but who'll make the playoffs — and lift the Lombardi Trophy at the end of this season?
NFL・2 DAYS AGO
The Spun

The retirement of longtime starting quarterback Ben Roethlisberger has left the Pittsburgh Steelers with a gaping hole at the QB position. But according to popular football video game “Madden 22,” that QB1 position will be filled by an intriguing name this coming season. The game’s franchise simulator seems...
NFL・2 DAYS AGO
The Spun

In just a few days, the Tampa Bay Buccaneers will host the Los Angeles Rams in the Divisional Round. With a trip to the NFC title game on the line, the Buccaneers enter as a slight favorite. According to most sports books, the Buccaneers are a three-point favorite over the Rams.
NFL・1 DAY AGO
ClutchPoints

The Cleveland Browns’ season didn’t end the way they wanted it to, as the franchise took a step backward from their 11-5 campaign last year to fall to 8-9. One of the big reasons for the Browns’ step back was the performance of quarterback Baker Mayfield, who noticeably struggled as he attempted to play through a nagging shoulder injury. Mayfield’s struggles opened up the rumor mill to a possible Browns trade, to which an anonymous NFL executive responded to with a stern warning to Cleveland, via Jeremy Fowler of ESPN (h/t Browns Wire):
NFL・2 DAYS AGO
Insider

Odell Beckham Jr. put together a clutch performance in the Rams’ 34-11 win over the Cardinals on Monday night, arguably his best game since coming to Los Angeles. He caught four passes for 54 yards and a touchdown, also completing a 40-yard bomb to Cam Akers on a trick play.
NFL・2 DAYS AGO

Five-star quarterback transfer Jaxson Dart is one of the most highly-sought-after prospects in the 2022 portal. And on Wednesday, he made an interesting visit to a prospective school. According to reports from On3 Sports, the now-former USC signal caller traveled to his hometown of Provo, Utah to visit with the...
PROVO, UT・2 DAYS AGO
The Spun

Jim Harbaugh Rumored To Be Considering At Least 2 NFL Jobs

The Jim Harbaugh to the NFL rumors are heating up this week. On Wednesday night, Bruce Feldman reported that sources inside Michigan football told The Athletic they think Harbaugh would accept the Las Vegas Raiders job if offered it. “They also know that Harbaugh can be hard to read,” Feldman...
NFL・1 DAY AGO
CBS Sports

Dallas Cowboys owner and de facto general manager Jerry Jones is frustrated with a whole lot of things after his team's disappointing opening-round playoff loss to the San Francisco 49ers. Among the things disappointing him at the moment is wide receiver Amari Cooper. "Amari Cooper should take half the field...
NFL・19 HOURS AGO
Sportsnaut

A number of NFL futures bets can be placed throughout the 2021 NFL season, but Super Bowl odds are where
NFL・2 DAYS AGO
The Spun

Just a few days ago, Dallas Cowboys quarterback Dak Prescott made headlines with a controversial comment he made about the officials from Sunday’s game. Following the 23-17 loss to the San Francisco 49ers, Cowboys fans threw objects onto the field, expressing their anger with the officiating crew. After learning fans threw objects at the officials, Dak responded, “Credit to them.”
NFL・1 DAY AGO
Sportsnaut

The Minnesota Vikings are cleaning house this offseason, putting the future of quarterback Kirk Cousins in the spotlight. If the
NFL・19 HOURS AGO
Sportsnaut

The 2021 season for the Arizona Cardinals season finale was about as ugly as it gets. Maybe there would be
NFL・1 DAY AGO
Sportsnaut

The 2021 NFL regular season is over and playoffs are in full swing, which brings us to one of our
NFL・2 DAYS AGO