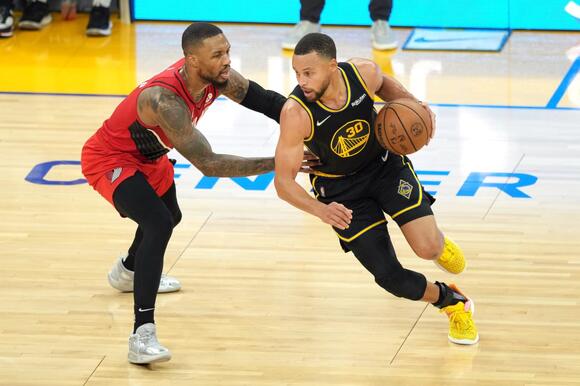 Steph Curry had an unbelievable shot in the game between the Golden State Warriors and the Portland Trail Blazers.

Steph Curry and the Golden State Warriors are hosting Damian Lillard and the Portland Trail Blazers on Friday night in San Francisco, California.

During the second quarter, Curry had an unbelievable shot that he made with Lillard guarding him.

Curry and the Warriors came into the game with a 16-2 record in their first 18 games, which is the best record in the entire NBA.

After not making the postseason in each of the last two seasons, they appear poised to be a contender this season.

As for the Trail Blazers, they have lost in the first round of the playoffs in each of the last two seasons, and came into the game with a 10-9 record in their first 19 games.

The Golden State Warriors are hosting the Detroit Pistons on Tuesday evening, and the Warriors shared an awesome photo of Klay Thompson and Steph Curry.
NBA・19 HOURS AGO
FastBreak on FanNation

Steph Curry and the Golden State Warriors are playing the Detroit Pistons on Tuesday night.
NBA・19 HOURS AGO
Sports Illustrated

Analysis and bets for Tuesday's games featuring the Timberwolves visiting the Knicks and the Warriors welcoming the Pistons.
NBA・1 DAY AGO
FastBreak on FanNation

The Portland Trail Blazers and Orlando Magic have announced their starting lineups for Monday's game in Florida.
NBA・1 DAY AGO

Steph Curry and the Golden State Warriors are hosting the Detroit Pistons at Chase Center on Tuesday.
NBA・19 HOURS AGO
Sportsnaut

Jusuf Nurkic had 21 points and a season-high 22 rebounds, CJ McCollum scored 16 points in a successful return to
NBA・1 DAY AGO
FastBreak on FanNation

Curry's response to fans who claim he 'ruined the game' originally appeared on NBC Sports Bayarea. Steph Curry is the greatest shooter in the history of the NBA and still, some fans will find a reason to diminish what he has done for the game of basketball. The Warriors' superstar...
NBA・14 HOURS AGO

Portland Trail Blazers: No, you still can’t have Damian Lillard

James Harden of the Brooklyn Nets sent out a tweet on Sunday.
NBA・2 DAYS AGO
ClutchPoints

LeBron James and Magic Johnson engaged in a bit of an indirect back-and-forth on Twitter over the weekend. Following the Los Angeles Lakers blowout loss to the Denver Nuggets on Saturday, the Hall of Fame point guard sent out a critical tweet calling out the Lakers’ effort. Less than...
NBA・1 DAY AGO
Sportsnaut

Bookmark. Save. Do your thing. We will be providing constant updates on this page as it relates to the biggest
NBA・1 DAY AGO

James Harden and the Brooklyn Nets lost to the Cleveland Cavaliers in Ohio on Monday afternoon.
NBA・1 DAY AGO
fadeawayworld.net

The Los Angeles Lakers have received plenty of criticism this campaign, given their inability to win games consistently. Instead, they have struggled to find their touch, and even though they have entered winning streaks, it's been because of individual performances rather than a collective effort. LeBron James and Anthony Davis...
NBA・1 DAY AGO
FastBreak on FanNation

The Eastern Conference is full of amazing teams and the Miami Heat is certainly one of them. But the biggest difference between the Heat and the other teams in the league is their ability to comb through hidden gems. One of their last founding is the undrafted rookie center Omer Yurtseven.
NBA・2 DAYS AGO

Kyle Kuzma threw down a huge dunk on Joel Embiid during the game between the Philadelphia 76ers and Washington Wizards on Monday afternoon.
NBA・2 DAYS AGO
Audacy

The Detroit Pistons reportedly offered Jerami Grant, Saddiq Bey, Kelly Olynyk and a first-round pick for Ben Simmons, but Daryl Morey and the Sixers brass were not moved by it.
NBA・1 DAY AGO
FastBreak on FanNation

Here's What Bradley Beal Tweeted After The Wizards Beat The 76ers

Bradley Beal and the Washington Wizards defeated the Philadelphia 76ers on Monday afternoon.
NBA・2 DAYS AGO
FastBreak on FanNation

NBA veteran Chandler Parsons has announced his retirement from the NBA in an Instagram post on Tuesday. Parsons has played for the Houston Rockets, Dallas Mavericks, Memphis Grizzlies and Atlanta Hawks.
NBA・1 DAY AGO