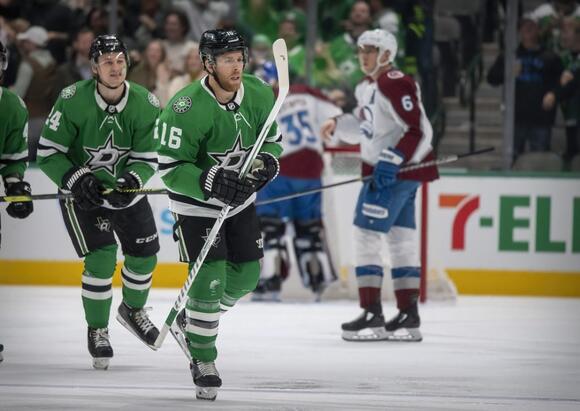 Jake Oettinger stopped 32 shots, 19 in the third period, after missing the last 7:22 of the second period following a hit to the head.

Cale Makar scored a goal for the fifth straight game and Darcy Kuemper made 19 saves for Colorado, which had its six-game winning streak snapped. Nazem Kadri saw his 10-game point streak end.

Pavelski, 37, wasted little time in his quest for the goal milestone. Early in the first period, the Stars got the puck into the offensive zone and worked it around to Jason Robertson near the top of the right circle. He sent a pass wide of the net, and Pavelski deflected it into an open net at 1:12 for No. 399.

Dallas made it 2-0 soon after. Colorado tried to clear the puck out of its end when Ryan Murray sent it up the boards, but the Stars’ Roope Hintz got control. He fed Pavelski as he moved to the slot, and Pavelski flicked a shot through defenseman Erik Johnson’s legs and just inside the left post at 1:31.

It was his sixth of the season.

Oettinger had stopped 13 shots when the Avalanche’s Nicolas Aube-Kubel went through the crease and hit the goaltender in the head at 12:38 of the second period. Oettinger got up slowly and skated to the bench during a stoppage, then came back to the net but was immediately replaced by Braden Holtby.

Aube-Kubel was given a minor for goaltender interference, and the Stars took advantage. Miro Heiskanen got the puck in the right circle, slipped a pass to Gurianov in front of the net, and Gurianov snapped a shot between Kuemper’s legs at 14:26 for his fourth goal of the season.

Oettinger was back in net to start the third period. Holtby stopped four shots in the 7:22 he played.

Kuemper came off for an extra skater, and Makar scored at 16:39 of the third period, his ninth of the season.

NEWARK, N.J. (AP) — Joe Pavelski had two goals and two assists, and the Dallas Stars extended their winning streak to four games with a 5-1 victory over the New Jersey Devils on Tuesday night. Roope Hintz scored for the fourth straight game and rookie Jacob Peterson got his...
NHL・4 HOURS AGO
Sportsnaut

The NHL season officially started back on October 12. In this article, we track all the NHL games today as
NFL・19 HOURS AGO
Sportsnaut

Now that the 2021-22 season is about half of the way through, and Covid is ravaging many clubs, it’s time
NHL・12 HOURS AGO

This past week, the Boston Bruins honored Willie O’Ree by retiring his No. 22 and lifting it high into the TD Garden rafters. But that is not enough. O’Ree was The post Minton: The NHL needs to retire Bruins legend Willie O’Ree’s number appeared first on Itemlive.
NHL・1 DAY AGO
93.7 The Fan

He said it initially it was a head-shot and after having time to watch it, Pens head coach Mike Sullivan questions why the league won’t punish the hit on Teddy Blueger
NHL・14 HOURS AGO

The Carolina Hurricanes, who pride themselves on their work at the defensive end, will look to shake off a rare
NHL・23 HOURS AGO
Sportsnaut

DENVER (AP) — Nazem Kadri and Mikko Rantanen scored, Pavel Francouz made 23 saves for his third career shutout and the Colorado Avalanche beat the Chicago Blackhawks 2-0 on Monday night to extend their franchise-record home winning streak to 16 games. It was the seventh straight victory overall for...
NHL・1 DAY AGO

By Michael Hurley, CBS Boston BOSTON (CBS) — It’s early in the Tuukka Rask 2.0 Era for the Boston Bruins, but the results have been discouraging thus far. Rask fell to 2-2 in his four starts since rejoining the Bruins this month with a 5-3 loss to the Ducks on Monday night. Rask allowed five goals on just 27 shots faced, sinking Boston’s chances in what ended up as just the Bruins’ third loss of the month. Never one to shy away from a bad performance, Rask spoke with the media after the game and matter-of-factly explained his level of play. “Obviously,” Rask said, “I...
NHL・16 HOURS AGO
San Diego Union-Tribune

Troy Terry scored his team-leading 23rd goal, Ryan Getzlaf had a goal and set up another, and the Anaheim Ducks cooled off the Boston Bruins with a 5-3 victory
NHL・1 DAY AGO
San Diego Union-Tribune

Sebastian Aho scored with 1:11 left in overtime to give the Carolina Hurricanes a 4-3 victory over the visiting Vegas
NHL・4 HOURS AGO