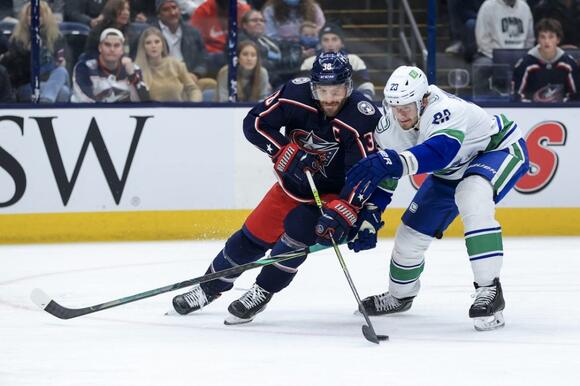 Gustav Nyquist collected one goal and one assist and Jack Roslovic scored the go-ahead goal in the third period to give the host Columbus Blue Jackets a 4-2 victory over the slumping Vancouver Canucks on Friday.

Adam Boqvist and Max Domi also scored for the Blue Jackets, who have won five of six games. Goaltender Elvis Merzlikins made 39 saves in a sparkling performance.

With the score tied, Roslovic gave the Blue Jackets their third lead of the night at 6:06 of the final frame. He completed a dominating shift by zipping a shot from the high slot that ricocheted off a defender’s leg and into the net for his third goal of the season. It was also his third in as many games after failing to score in the first 15 contests of the season.

Vasily Podkolzin and Tyler Motte replied for the Canucks, who are on a three-game losing skid and have just one win in nine outings. Goalie Thatcher Demko stopped 17 shots.

The Canucks were the better team out of the gates, but Nyquist opened the scoring with a short-handed tally at the 13:54 mark of the first. Nyquist intercepted a pass at his own blueline to create a breakaway and snapped a shot from the slot for his fourth goal of the season. At the time, the Canucks held a 12-2 edge in shots.

Since Nov. 11, the Canucks have scored two power-play goals and surrendered just as many short-handed goals against.

Podkolzin’s goal with 29 seconds remaining in the opening frame pulled the visitors even. Justin Dowling intercepted a clearing attempt and passed to Podkolzin, who quickly sniped his fourth goal of the season.

Boqvist’s second goal of the season restored the Blue Jackets’ lead at 6:17 of the second period. Demko stopped Gavin Bayreuther’s deflected point shot, but Boqvist pounced on the rebound.

However, Motte drew Vancouver even a second time with 78 seconds remaining in the frame. Motte deflected a Quinn Hughes point shot for his first goal of the season.

The NHL season officially started back on October 12. In this article, we track all the NHL games today as
NFL・23 HOURS AGO
Pantagraph

VANCOUVER, B.C. — The Vancouver Canucks were missing some high-end talent Sunday. Captain and goal-scoring leader Bo Horvat; points leader J.T. Miller; and Blues-killer (from his days with Arizona) Conor Garland. And that was just at forward. Workhorse goalie Thatcher Demko and his veteran backup Jaroslav Halak also were...
NHL・1 DAY AGO
FanSided

After a hard-fought overtime loss in Washington, the Senators are right back at it tonight in Columbus. The Ottawa Senators will finish off the second half of a weekend back-to-back tonight against the Columbus Blue Jackets, the first meeting between the two teams this season. With the new mobility inserted...
NHL・1 DAY AGO
jacketscannon.com

Although the Columbus Blue Jackets dropped their game against the Penguins on Friday, they still played a solid game. They certainly wanted to build on the positives with the Ottawa Senators coming to town. The Senators may be behind the Jackets in the standings, but the 4-4-2 record in their last 10 games bests the Jackets’. Gavrikov and Sillinger returned to the lineup off the COVID protocol list and that would give Columbus one of their best lineups in recent memory.
NHL・1 DAY AGO

The St. Louis Blues have crossed the border and gone fishing – for Canucks that is. This is the first of three games between the two franchises this season. Should mistakes be made tonight, the teams will need to wait until March 28 and 30 to settle any scores. This season, the Blues are 8-7-3 on the road while the Canucks are 8-7-2 at home.
NHL・1 DAY AGO
Reuters

Ville Husso made 38 saves to lead the visiting St. Louis Blues past the depleted Vancouver Canucks 3-1 Sunday. Justin Faulk, Brayden Schenn and Jordan Kyrou scored and Vladimir Tarasenko had two assists for the Blues, who have gone 8-2 since returning from the NHL’s extended holiday break. Tanner...
NHL・1 DAY AGO
prohockeyrumors.com

The Vancouver Canucks have hired Emilie Castonguay as an assistant general manager, becoming the first female AGM in team history. Canucks’ president Jim Rutherford released a statement on the hire:. Émilie has extensive experience, is driven to succeed, and has a strong reputation in hockey for her intelligence and...
NHL・17 HOURS AGO
San Diego Union-Tribune

Justin Faulk had a goal and an assist and the St. Louis Blues beat the undermanned Vancouver Canucks 3-1
NHL・1 DAY AGO

Gaudreau and the Flames visit the Blue Jackets

Calgary Flames (19-12-6, fourth in the Pacific) vs. Columbus Blue Jackets (18-20-1, fifth in the Metropolitan) BOTTOM LINE: Johnny Gaudreau leads Calgary into a matchup with Columbus. He currently ranks ninth in the NHL with 48 points, scoring 16 goals and totaling 32 assists. The Blue Jackets are 11-8-1 on...
NHL・3 HOURS AGO
Yardbarker

The New York Islanders are making a late push for the Stanley Cup Playoffs. After starting the 2020-21 season with only five wins in their first 20 games, the Islanders have rebounded and currently have 14 wins in 34 games. Considering the team’s trajectory, it’s likely that Lou Lamoriello and the front office will make a move at the trade deadline to strengthen the roster.
NHL・1 DAY AGO
FOX2Now

VANCOUVER (AP) – Brayden Schenn’s power-play goal 3:26 into the second period put the Blues ahead to stay in a 3-1 victory at Vancouver. Ville Husso stopped 38 shots and blanked the Canucks after Tanner Pearson opened the scoring 16 1/2 minutes into the contest. Justin Faulk and Jordan Kyrou also scored to help St. Louis win for the sixth time in seven games.
NHL・1 DAY AGO
Sportsnaut

The Vancouver Canucks named former player agent Émilie Castonguay as an assistant general manager on Monday. Castonguay, 35, is the
NHL・14 HOURS AGO

Clark Gillies, a Hockey Hall of Famer and four-time Stanley Cup winner with the Islanders, has died at 67.
NHL・2 DAYS AGO
Sportsnaut

Vegas Golden Knights winger Reilly Smith is one of the hottest names leading up to the NHL trade deadline. With
NHL・17 HOURS AGO
USA TODAY

P.K. Subban said he felt accountability to call out recent racist actions in hockey because he has established a platform to inspire better behavior.
NHL・18 HOURS AGO
San Diego Union-Tribune

Gillies played with the Islanders from 1974 until 1986. He was elected to the Hockey Hall of Fame in 2002.
NHL・2 DAYS AGO
Chicago Tribune

Kevin Lankinen is back on the shelf seemingly as quickly as he returned. The Chicago Blackhawks placed the backup goalie on injured reserve Sunday with a right hand injury a day after he made 40 saves during a 4-3 overtime road loss to the Minnesota Wild. Lankinen appeared in each of the Hawks’ last two games, his first action since returning from COVID-19 protocols. Before that, his last ...
NHL・1 DAY AGO
Yardbarker

When you’re a team on the edge of making or missing the playoffs, it can be difficult to make decisions on some of your better players, especially when they could fetch a decent return if traded before the NHL trade deadline. Such is the case with the Vancouver Canucks when it comes to forward J.T. Miller.
NHL・2 DAYS AGO
Sportsnaut