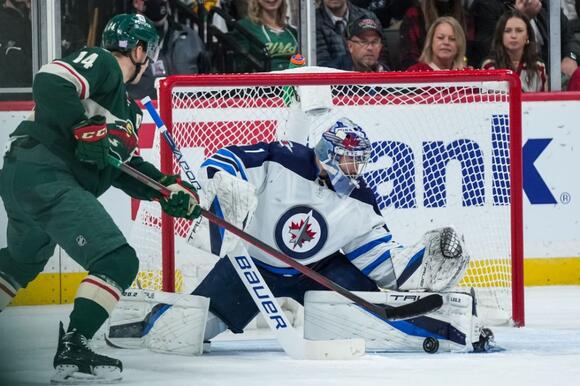 Kirill Kaprizov netted one goal and three assists and Mats Zuccarello scored twice before departing the game after being victimized by a second-period slash to lead the host Minnesota Wild to a 7-1 victory over the struggling Winnipeg Jets on Friday in St. Paul, Minn.

Alex Goligoski, Ryan Hartman, Jon Merrill and Matt Dumba also scored for the Wild, and goaltender Cam Talbot made 30 saves to kick off a five-game homestand.

Pierre-Luc Dubois replied with Winnipeg’s lone goal in its most lopsided loss of the season. Starting goalie Connor Hellebuyck was pulled after surrendering four goals on 14 shots. Eric Comrie made 21 saves in relief for the Jets, who have lost five straight games.

Goligoski opened the scoring 52 seconds into the clash with the game’s first shot to send the Wild off and running. Brandon Duhaime gained the puck deep in Winnipeg territory and sent it to Goligoski at the point, and he sent a bounding wrist shot that found the net for his second goal of the season.

Zuccarello doubled the lead with a lucky marker at the 7:47 mark. He fired a long shot that went off Hellebuyck’s shoulder, off the post and then ricocheted off the goalie’s arm and into the net.

The Wild took complete control in the second period. Kaprizov’s shot off the rush was stopped but Hartman chipped home the rebound for his team-leading 11th goal at 2:04 of the period.

Zuccarello scored his second of the game, and sixth of the campaign, just 45 seconds later by tapping in an easy marker set up by Kaprizov, which spelled the end of the game for Hellebuyck. Zuccarello left the game late in the second period after he was slashed on the arm by Winnipeg’s Nathan Beaulieu, which wasn’t penalized.

Dubois spoiled Talbot’s shutout bid with 4:52 remaining on the clock, but Kaprizov rounded out the scoring by netting his sixth goal of the season 14 seconds later.

The NHL season officially started back on October 12. In this article, we track all the NHL games today as
NFL・14 HOURS AGO
Sportsnaut

DENVER — Backup goaltender Pavel Francouz entered Monday’s game near the midway point and after an imperfect regulation, was perfect in the shootout. That allowed the Colorado Avalanche to win their 14th straight at Ball Arena, 4-3. Nathan MacKinnon’s go-ahead goal in the third period earned a long look from the officials. The puck was, by a reasonable mental leap, in the net, but covered by Minnesota Wild goalie Kaapo Kahkonen’s leg.
NHL・5 HOURS AGO
CBS Boston

BOSTON (CBS) — Brad Marchand’s star power was on full display last week, as the Bruins winger recorded at least two points in all four of Boston’s games. On Monday, the NHL honored him as the league’s First Star of the Week. Marchand dominated the ice last week, leading the NHL with six goals and 10 points in his four games — all Boston victories. The highlight of his week came in Boston’s 5-1 win over the Montreal Canadiens last Wednesday, when Marchand tallied his fifth career hat trick in the victory. Before that game, Marchand had a two-goal effort in a...
NHL・8 HOURS AGO

Joonas Donskoi, who has yet to score a goal this season, netted the clincher in a shootout as the Seattle
NHL・1 HOUR AGO
Sportsnaut

While their struggles on the road continue, the Dallas Stars will try to maintain their dominance on home ice when
NHL・21 MINUTES AGO

SUNRISE (CBSMiami) – As the Panthers begin a new week, it’s the same old story. The Cats are the best team in hockey. And the team doesn’t just beat opponents, they dominate. Florida is on the best offensive run over the last eight games the NHL has seen in more than a quarter century. Overall, the Panthers are 8-0-1 in their last nine games and are outscoring opponents by more than double. Now, the Cats hit the road. We Want 10 If you have been to a Panthers game the last few weeks, you heard the chant. If you watched games, you heard it...
NHL・1 DAY AGO
Sportsnaut

Not much has gone the way of the Montreal Canadiens this season, but they should get a major piece back
NHL・1 DAY AGO
Sportsnaut

The jersey retirement ceremony will take place on the anniversary of his NHL debut.
NHL・1 DAY AGO
Sportsnaut

When Boston hosts the Carolina Hurricanes on Tuesday night, the Bruins will retire the No. 22 of Hall of Fame
NHL・6 HOURS AGO