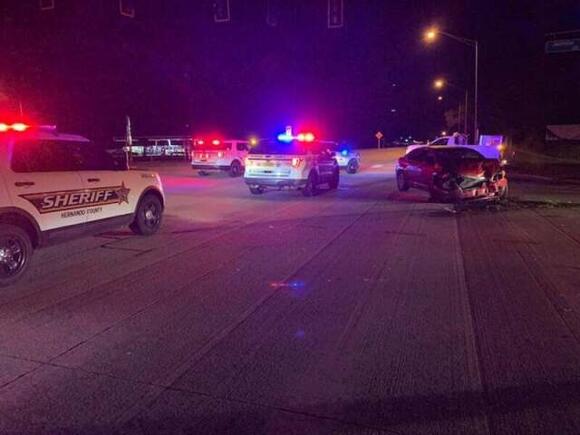 A Hernando Sheriff deputy and a K-9 were in a serious accident at Cortez and Jasmine Friday night.

Officials say both the Deputy and the driver of the other vehicle were taken to the ER.

At the time of the crash, Deputy Johnathan Weeks (K-9) was responding to a call for service regarding an armed suicidal person. Deputy Weeks had his emergency lights and siren activated.

The driver of the other vehicle was transported by ambulance to a local hospital. The passenger wasn't wearing a seatbelt and was airlifted to Bayonet in Pasco County.

None of the injuries sustained as a result of the crash are life-threatening. The cause of the accident is being investigated.

Deputies have blocked the road for the investigation.

A Manatee County Jail employee has been arrested and charged for taking drugs inside the facility, according to Manatee County Sherriff’s Office.
MANATEE COUNTY, FL・21 HOURS AGO
ABC Action News WFTS

The Florida Highway Patrol said shortly before 7 p.m. they received a call about a pedestrian being hit by a vehicle at the intersection of S.R. 60 and Turkey Creek Road.
4 DAYS AGO

The sheriff says a Polk County man has died after deputies were forced to shoot him.
POLK COUNTY, FL・5 DAYS AGO
ABC Action News WFTS

A Tennessee deputy was found dead in her burning home Sunday evening, and now the Tennessee Bureau of Investigation (TBI) is looking into the case.
TENNESSEE STATE・4 DAYS AGO
ABC Action News WFTS

Second arrest made in shooting outside Brandon mall

Tampa Police say two people are recovering in the hospital after they were found shot on the sidewalk outside of Club Eden early on Monday morning.
TAMPA, FL・5 DAYS AGO
ABC Action News WFTS

Starting Monday, the Pasco County Sheriff's Office said it will disable comments on the department's social media platforms to ensure that tips are sent through the "proper channels."
PASCO COUNTY, FL・5 DAYS AGO