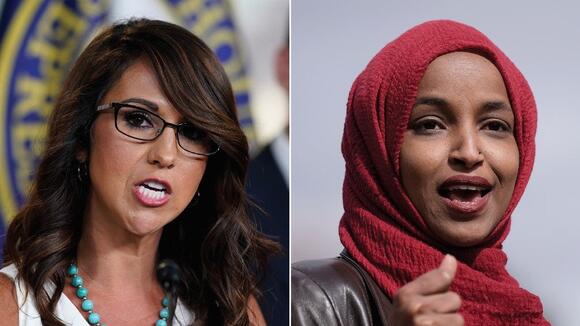 Rep. Lauren Boebert (R-Colo.) tweeted an apology to Muslims on Friday after Rep. Ilhan Omar (D-Minn.) called her out for "anti-Muslim bigotry" over an anecdote she shared in a recent speech.

In a video of her speech, Boebert tells a story — which Omar says never happened — in which they are in an elevator together and a Capitol Police officer is hurrying toward the elevator as the door is closing.

"I look to my left, and there she is. Ilhan Omar. I said, ‘Well she doesn't have a backpack, we should be fine,’ ” Boebert told the laughing crowd.

Omar called Boebert a "buffoon" in a tweet about the video on Thursday. “Anti-Muslim bigotry isn’t funny & shouldn’t be normalized. Congress can’t be a place where hateful and dangerous Muslims tropes get no condemnation,” she wrote.

Boebert apologized for the comments in a tweet Friday afternoon and said she had reached out to speak with Omar directly.

"I apologize to anyone in the Muslim community I offended with my comment about Rep. Omar," Boebert wrote. "There are plenty of policy differences to focus on without this unnecessary distraction."

Later in the day, Democratic leadership released their statement, which called for Boebert to "fully retract these comments and refrain from making similar ones going forward."

“Congresswoman Boebert’s repeated, ongoing and targeted Islamophobic comments and actions against another Member of Congress, Congresswoman Ilhan Omar, are both deeply offensive and concerning," they wrote.

“Leader [Kevin] McCarthy and the entire House Republican Leadership’s repeated failure to condemn inflammatory and bigoted rhetoric from members of their conference is outrageous," they added. "We call on the Republican Leadership to address this priority with the Congresswoman and to finally take real action to confront racism.”

The Hill has reached out to the offices of Omar, Boebert and McCarthy for comment.

Let me see if I understand this muzzi correctly. It is ok for her to be to go after Christians and Jews, but it isn't ok to go after her religion and beliefs? They want to either kill or enslave all who are not their faith. All one has to do is read to see that is what the end goal is.

Stop letting racist like Omar from getting into America. That’d be a good start. She’s a piece of 💩. She was married to her brother. Her new husband has received $100000+ from Omar’s campaign funds. She supports full blown communism in America. Folks, keep your powder dry.

Well, considering who she is talking about it was funny. I mean, Omar loves her brother unconditionally but hates America the same,so I can see why it was said. Let's go, Brandon!

The 81-year-old Pelosi says in an online video that the upcoming election is crucial, and "nothing less is at stake than our democracy.”
CONGRESS & COURTS・1 DAY AGO
Fox News

Civil rights attorney Leo Terrell ripped Democrats for continuing to promulgate claims that opponents to their election federalization legislation, the John Lewis Voting Rights Act, are rooted in racism, and that there is somehow a portion of the population that still lacks the right to vote. In a Fox News...
CONGRESS & COURTS・9 DAYS AGO
The Independent

House Speaker Nancy Pelosi has announced her intention to run for re-election, extending a career in the House of Representatives spanning more than three decades, ahead of a midterm election battle that could determine the balance of power in Congress.The California congresswoman – who is serving her 17th term in the House, and fourth term as speaker – made the announcement on her campaign’s social media channels on 25 January.While we have made progress much more needs to be done to improve people’s lives. This election is crucial: nothing less is at stake than our Democracy.But we don’t agonize-we...
PRESIDENTIAL ELECTION・1 DAY AGO
Washington Times

Senior Senate Democrats are insisting that universal mail-in ballots and voter drop boxes, measures included in their election overhaul legislation, help to fight racism. Sen. Amy Klobuchar, Minnesota Democrat and chair of the Rules Committee, said the federal voting measure is needed to counter what she called efforts by some states to suppress the vote.
UTAH STATE・7 DAYS AGO

Call to action on voting rights

Too often, the birthday of Dr. Martin Luther King Jr., a federal holiday since 1986, has devolved into a nostalgic and self-congratulatory look backward that sanitizes the message of the civil rights icon. This year, more than ever, the third Monday of January should become a call to action. No...
PRESIDENTIAL ELECTION・10 DAYS AGO
Wyoming News

Van Jones points out problem with Dem's rebuke of Sinema

The veteran Democrat said African Americans were "quite aggrieved" by new voting restrictions across the country.
CONGRESS & COURTS・4 DAYS AGO
Newsweek

The former president is currently leading the Florida governor by an average of 38 percentage points.
PRESIDENTIAL ELECTION・1 DAY AGO
Business Insider

Manchin remains peeved over a White House statement that singled him out, The Washington Post reported.
CONGRESS & COURTS・1 DAY AGO
1053rnb.com

Apparently, some white supremacists have gotten so desperate that they’re going door-to-door in white neighborhoods to spread the good word and inform residents that it’s time to make America white again. A viral TikTok video shows two Caucasian men who introduced themselves as “white nationalists” when approaching residents...
IMMIGRATION・7 HOURS AGO

The US says it won't fight for Ukraine if Putin invades, but it could still get pulled into a conflict with Russia, experts warn

A former US ambassador to Ukraine said it would be "sensible" for Biden to send troops to Eastern Europe as a deterrent amid tensions with Russia.
MILITARY・1 DAY AGO
Fox News

Former U.S. Ambassador Nikki Haley suggested that President Biden and Vice President Kamala Harris should step down from their positions over their handling of foreign policy. Speaking on "The Guy Benson Show," Haley condemned Biden’s comments from his press conference last week, where he implied there may be no action should there be a "minor incursion" by Russia at the Ukrainian border.
PRESIDENTIAL ELECTION・6 HOURS AGO
Newsweek

In the ongoing conflict between Russia and Ukraine, Russian President Vladimir Putin’s eyes are on a bigger prize, a top expert on Putin and his country says. “This time,” writes former intelligence officer Fiona Hill in a New York Times op-ed, “Mr. Putin’s aim is bigger than closing NATO’s ‘open door’ to Ukraine and taking more territory — he wants to evict the United States from Europe. As he might put it: ‘Goodbye America. Don’t let the door hit you on the way out.’ ”
POLITICS・2 DAYS AGO
Business Insider

There had been speculation that the 81-year-old California Democrat would retire at the end of her current term.
CALIFORNIA STATE・1 DAY AGO
houstonianonline.com

Pelosi has been the representative of California since 1987. She became the Democratic Leader of the House of Representatives in 2003. In 2007, she was the first woman elected Speaker of the House, until the Democrats lost the 2011 midterm elections. In 2019 she held the position of speaker again.
POLITICS・19 HOURS AGO
POLITICO