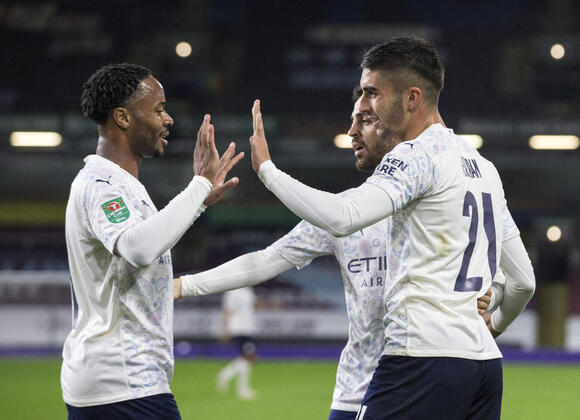 Barcelona and newly-appointed first-team manager Xavi Hernandez are looking to rebuild a side decimated by the departure of club legend Lionel Messi during the previous summer window.

The legendary Argentine forward joined Paris Saint-Germain upon the expiry of his contract and ended over a decade of brilliance at the Camp Nou.

To make matters worse, Barcelona also announced a debt rising to over £1.5 billion.

It is obviously a tough job for anybody to take on, but with the core pool of young talent in their squad, the hope is that a few more additions will help them challenge for major honours again.

In recent months, and even as recently as Friday evening, two Manchester City players have been linked to that particular switch, namely forward duo Ferran Torres and Raheem Sterling.

This has now been confirmed by club sources directly via Jack Gaughan of the Daily Mail, who says that both Barcelona's Chief Executive Ferran Reverter and the aforementioned Director of Football were present in Manchester.

However, Manchester City have claimed this is just for what have been described as 'business meetings'.

Whether the subject of Raheem Sterling and/or Ferran Torres was brought up in these mysterious meetings remains unknown, but it is likely to be discussed if the interest is truly there.

Earlier today, various reports from Spain claimed that Ferran Torres had asked Pep Guardiola and Manchester City to leave, with Barcelona being his desired location given the opportunity presented by the La Liga giants.

The reports regarding Raheem Sterling are slightly different, however. With a combination of 'economics' involved and the player's return to form making a deal - especially in January - highly unlikely.

While City were far from their best at St. Mary’s, a rare tough night at the office does not demand a meltdown, as the league leaders maintain a sizeable nine point-gap ahead of Liverpool in the Premier League table. Speaking after the Premier League champions’ recent fixture, Pep Guardiola...
PREMIER LEAGUE・1 DAY AGO
The Independent

Real Madrid scored twice in the final 10 minutes to avoid an embarrassing LaLiga home defeat to Elche.The Valencians were on course for a memorable win at the Bernabeu as they led 2-0 after 82 minutes, with goals from Lucas Boye and Pere Milla.But Luka Modric got his side back in it from the spot and then Eder Militao made it 2-2 in the second minute of time added on as Carlo Ancellotti’s men extended their lead at the summit to four points.💪 That scoring feeling! @edermilitao | #RealMadridElche pic.twitter.com/i9eyHplrmf— Real Madrid C.F. 🇬🇧🇺🇸 (@realmadriden) January 23, 2022Barcelona also needed...
SOCCER・1 DAY AGO
CityXtra

Pep Guardiola has been the jewel in the Manchester City crown for a number of years. The Spanish tactician’s genius is what has made the club a winning machine, securing three Premier League titles, one FA Cup and four Carabao Cup trophies in his five full seasons in charge.
PREMIER LEAGUE・2 DAYS AGO
sportstalkline.com

Having didn't trace a change for Sergio Aguero over the summer season, Manchester City’s resolution to let Ferran Torres scuttle away the club this week would possibly possibly possibly reach as a surprise to many. The Spaniard used to be one of simplest two gamers in the City squad,...
PREMIER LEAGUE・1 DAY AGO

On Friday, a flurry of reports from both Argentina and England claimed that Manchester City were in talks to sign Julian Alvarez from River Plate, with the 21-year-old out of contract in December. The centre-forward, who recorded 39 direct goal involvements in 46 appearances for River Plate in 2021, has...
PREMIER LEAGUE・2 DAYS AGO
CityXtra

Pep Guardiola's side went into this afternoon's Premier League clash with the opportunity to extend their lead at the top of the table to 14 points. However, second place Liverpool do have two games in hand. It was the hosts who started the brightest, stretching City's backline, with Kyle Walker-Peters...
PREMIER LEAGUE・2 DAYS AGO
The Independent

Kevin De Bruyne has insisted the title race is not over and is determined to make sure Manchester City maintain their intensity.Premier League leaders City dropped points for the first time since October on Saturday as they were held to a 1-1 draw at SouthamptonThe result ended the champions’ run of 12 successive victories and allowed second-placed Liverpool who have game in hand and a trip to the Etihad Stadium to come, to cut their advantage to nine points.De Bruyne told City TV: “Obviously the schedule in December is a lot of games following each and we managed to...
PREMIER LEAGUE・7 HOURS AGO

All the talk around Manchester City at the moment is surrounding their potential new signing, Julian Alvarez. Since the 21-year-old burst onto the radar last Friday, rumours have suggested his move to the Etihad Stadium is imminent - but what they intend to do with the young talent is another question.
PREMIER LEAGUE・5 HOURS AGO
San Diego Union-Tribune

As Sergio Aguero found the exit door at the end of last season, many supporters at the Etihad Stadium were expecting a breakthrough campaign for rising forward Liam Delap, after an impressive 2020/21 season. However, much to the disappointment of many - none more than Delap himself, the 18 year-old...
PREMIER LEAGUE・1 DAY AGO
The Independent

Manchester City were denied a 13th consecutive Premier League win as Southampton held on to claim a deserved point in a 1-1 draw at St Mary’s.Kyle Walker-Peters stunned the visitors when he finished off a well-worked move by curling home the opener for Ralph Hasenhuttl’s men with just seven minutes on the clock.It took City until the 65th minute to level through Aymeric Laporte, with both Kevin De Bruyne and Gabriel Jesus striking the woodwork as Pep Guardiola’s side searched in vain for a winner.The result leaves the reigning champions 12 points clear of second-placed Liverpool, albeit having played two...
PREMIER LEAGUE・2 DAYS AGO

The 2021/22 season has been a nightmarish campaign on a personal front for Manchester City's rising academy striker, Liam Delap. The 18-year old has suffered niggling injury problems throughout the campaign, leading to the prodigious striker only managing to play in four academy games so far this season. With Manchester...
PREMIER LEAGUE・1 DAY AGO
CityXtra

Julian Alvarez has been heavily linked with a potential switch to Manchester City across the past few days, with negotiations between all relevant parties seemingly accelerating in a matter of hours on Saturday. Following the departure of legendary forward Sergio Aguero last summer, and the recent sale of Ferran Torres,...
PREMIER LEAGUE・1 DAY AGO
CityXtra

Despite Joshua Wilson-Esbrand making just one appearance so far this season for Manchester City's first-team squad, the promising young left-back is held in high regard by the majority of the club's fanbase. This admiration comes as a result of his impressive debut against Wycombe Wanderers in the Carabao Cup earlier...
PREMIER LEAGUE・9 HOURS AGO
CityXtra

After seeing their 12-game winning run in the Premier League be halted by Southampton following their 1-1 draw at St. Mary's at the weekend, Manchester City players and staff have been handed a two-week break before resuming action in the FA Cup against Fulham on February 5th. The likes of...
PREMIER LEAGUE・5 HOURS AGO
CityXtra

With Pep Guardiola’s contract at Manchester City set to run out in 2023, the million-dollar question remains, which manager will be the successor to the Spaniard after his departure. The Catalan coach has won ten trophies in his five full seasons at the Etihad Stadium, and looks on course...
PREMIER LEAGUE・2 DAYS AGO
CityXtra

While Pep Guardiola has admitted previously that Manchester City are highly unlikely to announce any fresh incomings in January despite the ongoing speculation around the imminent arrival of Julian Alvarez, the Sky Blues could still send a few academy youngsters on loan till the summer. Cole Palmer, 19, has been...
PREMIER LEAGUE・4 HOURS AGO
CityXtra

Sri Lanka, Maldives, Dubai: Where Manchester City's Stars Have Jetted Off to During the Premier League Winter Break

Originally, Manchester City had been planning on heading off on a warm-weather training camp in Abu Dhabi, as Pep Guardiola and his backroom staff looked for the best of both worlds: Good weather, and retaining sharpness. However, as a direct result of the Covid-19 pandemic, and concerns over the safety...
PREMIER LEAGUE・2 HOURS AGO
CityXtra

Manchester City are known to have been in the search for a left-back for a couple of seasons. While the likes of Fabian Delph and Oleksandr Zinchenko have deputised well in the position, following a transformational education from Pep Guardiola, the club have been in dire need of a specialist in the role.
PREMIER LEAGUE・5 HOURS AGO