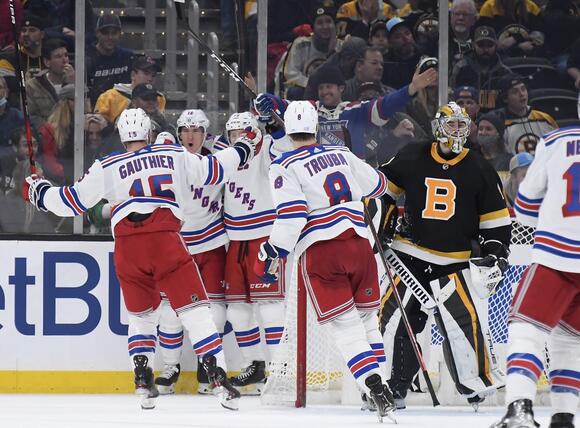 The Bruins once again got a chance to test themselves against a playoff team on Friday, and they once again came up short, falling 5-2 to the New York Rangers.

The difference between the Bruins’ play against non-playoff teams this season and their play against the top teams in the NHL is hard to ignore.

After Friday’s loss, Boston is now 9-1-0 against teams not in playoff position as of Friday afternoon, but just 1-6-0 against teams that are currently in a playoff spot.

Coach Bruce Cassidy lamented his team once again not playing “winning hockey” in the third period in particular, and said the Bruins “kind of pissed it away, to be honest with you.”

Star winger Brad Marchand struck a more optimistic tone, though, and explained why he’s not worried about the Bruins’ lack of wins against playoff teams.

“I’m not concerned, at all,” Marchand said. “It’s early in the year. We have a lot of new faces in our group. It’s a different year for us, a lot different than what we’ve had for a long time. We have to build something again, whereas before we had such little turnover that whoever came in just kind of fit into the group and everything was already established.

“I didn’t think we expected to come in and dominate from the start of the year. We knew it would be a process to get our game to where it needs to be, but we’re not concerned about game, whatever it is, 17, 18. We want to play our best down the stretch, and that’s what we’re going to build for. It’s like building a house. You have to build the foundation, and that’s what we need to work on and go from there.”

After Friday’s loss, the Bruins are now tied for eighth in the Eastern Conference on points percentage. Despite where they sit in the standings, Marchand said he still sees the potential for the Bruins to be a great team and go toe-to-toe with anyone in front of them.

“If we do [clean up the little things] and stop shooting ourselves in the foot, we’re going to be a hell of a team,” Marchand said. “It’s just getting on the same page all the time and trusting that no matter what the score is, each guy’s going to do their job and we’re not going to have those little lapses. That’s the difference between a good team and a great team, is those little breakdowns. We just have to minimize them.”

Now that the 2021-22 season is about half of the way through, and Covid is ravaging many clubs, it’s time
NHL・1 DAY AGO
WEEI Sports Radio

Karson Kuhlman’s time with the Boston Bruins has come to an end, as the 26-year-old right wing was claimed off waivers by the Seattle Kraken on Monday.
NHL・2 DAYS AGO
WEEI Sports Radio

Carolina Hurricanes forward was asked on Tuesday if he sees similarities between himself and Boston Bruins star Brad Marchand. Marchand responded by saying that’s like “comparing a Lambo to a Prius.”
NHL・1 DAY AGO
theathletic.com

Welcome to our NHL player cards page where you will find data visualizations for each relevant player on the Boston Bruins, stylized as hockey cards. Each card contains a player’s info, role, and salary as well as his stats — both basic and advanced, projected and actual — for an at-a-glance look at his value and ability.
NHL・2 DAYS AGO

With every league roughly midway through the 2021-22 season, we take a look at how some of the Boston Bruins’ top prospects are doing, including Fabian Lysell, Jack Studnicka and Mason Lohrei.
NHL・1 DAY AGO
WEEI Sports Radio

The NHL announced the dates and times for nine rescheduled Boston Bruins games. Their February break – initially scheduled for the Olympics – has now been filled in.
NHL・1 HOUR AGO
WEEI Sports Radio

The Boston Bruins’ five-game winning streak came to a crashing halt Tuesday night in an ugly 7-1 loss to the Carolina Hurricanes. What do they do after a night like that? “Burn the tape,” according to Patrice Bergeron.
NHL・16 HOURS AGO
NBC Sports

Brad Marchand didn't become the best all-around left winger in the NHL overnight. It took years of hard work and perseverance to not only earn a regular role with the Boston Bruins, but also rise up the lineup to first-line status. Marchand broke into the league as a fourth-liner who...
NHL・7 HOURS AGO

The Boston Bruins will look for a return to normalcy when they host the Washington Capitals on Thursday night. The
NHL・3 HOURS AGO
Sportsnaut

If you’re looking for fantasy hockey tips for the games ahead, you have come to the right place. As the
NHL・1 DAY AGO
WFAN Sports Radio

Islanders veteran Zdeno Chara dropped Flyers defenseman Zack McEwan with an uppercut to the face, then made sure to check if his opponent was OK.
NHL・5 HOURS AGO
KMOX News Radio

When Boston hosts the Carolina Hurricanes on Tuesday night, the Bruins will retire the No. 22 of Hall of Fame
NHL・2 DAYS AGO
USA TODAY

Centers Steven Stamkos of the Tampa Bay Lightning, Nazem Kadri of the Colorado Avalanche and Mika Zibanejad of the New York Rangers, and Anaheim winger Troy Terry have won the final roster spots for the NHL's All-Star Weekend as a result of fan voting
NHL・23 HOURS AGO
KREX

SAN JOSE (CBS SF) – On Monday, San Jose Sharks winger Timo Meier achieved something that hadn’t been done in an NHL game since 1994 – score five goals by himself – and he did it with a period to spare. Meier, who was named to the NHL All-Star game last week for the first time in his career, scored five goals against the Los Angeles Kings within the first 40 minutes of their match in L.A. Monday. The Sharks beat the Kings 6-2. Timo Meier scores his fifth goal this afternoon to set a new franchise record for goals in a...
NHL・1 DAY AGO
Sportsnaut

Joonas Donskoi, who has yet to score a goal this season, netted the clincher in a shootout as the Seattle
NHL・1 DAY AGO