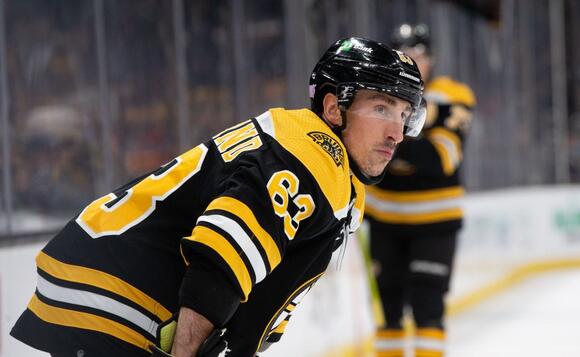 Friday afternoon wasn’t a fun one for the Bruins, who lost 5-2 to the Rangers at TD Garden. But there was one funny moment you can’t help but laugh at.

In the closing seconds of the game, the two teams were exchanging some words, including from one bench to the other. That’s when Rangers star Artemi Panarin decided to wind up, lean across the rinkside reporter box between the benches, and fire his glove right at Brad Marchand.

The rare but hilarious move seemed to catch Marchand, no stranger to some hijinks himself, by surprise. After the game, Marchand acknowledged this was a new one.

“Yeah, that one caught me off guard a little bit,” Marchand said. “I’ve had a lot of things thrown at me, but not typically by players.”

Asked what led up to the glove throw, Marchand gave a classic Marchand response.

“We were just asking each other how Thanksgiving dinner was. He didn’t like what I ate,” Marchand said.

Last year, Marchand co-starred in another funny moment between the Bruins and Rangers, when he and Mika Zibanejad engaged in a lengthy standoff to try to be the last player off the ice after warmups . That was eventually settled by a game of rock-paper-scissors.

Panarin and the Rangers got the last laugh this time, cruising to the 5-2 win with Panarin registering a goal, an assist and a plus-3 rating on the day.

Now that the 2021-22 season is about half of the way through, and Covid is ravaging many clubs, it’s time
NHL・1 DAY AGO
NBC Sports

Carolina Hurricanes forward Vincent Trocheck got the attention of Boston Bruins forward Brad Marchand before Tuesday night's game at TD Garden. For context, Trocheck was asked by a reporter Tuesday morning if his style of play is similar Marchand's, and this was his response:. Marchand responded to Trocheck's comments with...
NHL・1 DAY AGO
NESN

Vincent Trocheck on Tuesday was asked if he sees some similarities between his game and Brad Marchand’s. It appears Marchand does not agree with his answer. Trocheck was posed the question ahead of the Carolina Hurricanes’ game against the Boston Bruins at TD Garden. Trocheck first responded with a zinger, asking the reporter if he was calling him a rat, before answering that it was a fair comparison to make.
NHL・1 DAY AGO
Sportsnaut

Despite a slew of COVID-19 postponements, the interruptions have hardly stopped Auston Matthews’ ability to score goals — especially in
NHL・1 DAY AGO

BOSTON (CBS) — Brad Marchand’s star power was on full display last week, as the Bruins winger recorded at least two points in all four of Boston’s games. On Monday, the NHL honored him as the league’s First Star of the Week. Marchand dominated the ice...
NHL・2 DAYS AGO
letsgobruins.net

The Boston Bruins will faceoff against the Carolina Hurricanes on Tuesday night and things are already getting fired up. This morning Hurricanes' forward Vincent Trocheck was asked if is style of play is similar to Brad Marchand's. Instead of actually answering the question, Trocheck decided to take a shot at...
NHL・20 HOURS AGO
NESN

Boston Bruins winger Brad Marchand was named the NHL’s first star of the week for leading the league in goals and points across four games. For that reason, we’re naming him our VA Hero of the Week. The 33-year-old netted his fifth career hat trick Jan. 12 in...
NHL・1 DAY AGO
Golf Digest

Brad Marchand calls himself a Lamborghini, gets immediately totaled by the Carolina Hurricanes

Things change fast in this business. On Tuesday afternoon, Brad Marchand was the toast of the town, with every R-dropping pucks nut in the Commonwealth clinking their Boston Lagers in celebration of Marchand’s war of words with the Carolina Hurricanes’ Vincent Trocheck. By Tuesday night, the Bruins forward was lying face down on Storrow Drive, steamrolled by a 23-year-old Canes social admin.
NHL・8 HOURS AGO

Brad Marchand didn't become the best all-around left winger in the NHL overnight. It took years of hard work and perseverance to not only earn a regular role with the Boston Bruins, but also rise up the lineup to first-line status. Marchand broke into the league as a fourth-liner who...
NHL・8 HOURS AGO
markerzone.com

TROCHECK CRACKS A JOKE WHEN BEING COMPARED TO MARCHAND; MARCHAND RESPONDS

The Carolina Hurricanes are in Boston to take on the Bruins tonight. Following the morning skate, Hurricanes reporter Chip Alexander asked forward Vincent Trocheck if his game and playing style is similar to that of Bruins forward Brad Marchand. Trocheck responded with, "Are you calling me a rat?" Both Trocheck...
NHL・1 DAY AGO
NESN

Vincent Trocheck has faced the Boston Bruins plenty of times throughout in his career. So, he knows Brad Marchand well. The Carolina Hurricanes are set to play the Bruins on Tuesday at TD Garden, marking another opportunity for the 28-year-old to go up against Marchand. Trocheck, formerly of the Florida Panthers until he was traded to Carolina at the 2020 deadline, is a two-way forward with good offensive upside who always finds ways to mix things up and get under opponents’ skin.
NHL・1 DAY AGO
WFAN Sports Radio

Islanders veteran Zdeno Chara dropped Flyers defenseman Zack McEwan with an uppercut to the face, then made sure to check if his opponent was OK.
NHL・6 HOURS AGO

If you’re looking for fantasy hockey tips for the games ahead, you have come to the right place. As the
NHL・1 DAY AGO
WEEI Sports Radio

Karson Kuhlman’s time with the Boston Bruins has come to an end, as the 26-year-old right wing was claimed off waivers by the Seattle Kraken on Monday.
NHL・2 DAYS AGO
KMOX News Radio

While their struggles on the road continue, the Dallas Stars will try to maintain their dominance on home ice when
NHL・1 DAY AGO
USA TODAY

When Boston hosts the Carolina Hurricanes on Tuesday night, the Bruins will retire the No. 22 of Hall of Fame
NHL・2 DAYS AGO
theathletic.com

Welcome to our NHL player cards page where you will find data visualizations for each relevant player on the Boston Bruins, stylized as hockey cards. Each card contains a player’s info, role, and salary as well as his stats — both basic and advanced, projected and actual — for an at-a-glance look at his value and ability.
NHL・2 DAYS AGO