Texans' Best Player? Brandin Cooks - And He Can Help Even More

And he's definitely the most effective weapon on the lowest-scoring offense in the league.

The veteran wide receiver has 59 receptions for 659 yards and two touchdowns, also leading the 2-8 Texans with 87 targets and ranks 13th in the NFL in catches and targets.

That’s why it was strange to see Cooks targeted a season-low three times for a season-low two catches for 18 yards during a 22-13 road victory over the Tennessee Titans at rain-soaked Nissan Stadium.

The weather was definitely an element in Cooks not being more involved, which the Texans expect to more of going forward.

“I think there was a lot of things, weather being probably a big factor in that,” Texans offensive coordinator Tim Kelly said. “The way the game was going in terms of us wanting to make sure we were controlling the ball and not exposing the football. So, I think there was a number of different factors, nothing anybody was doing to take him away, or nothing that he’s doing. He was open on a couple opportunities, and for whatever reason weren’t able to get the ball to him.”

Cooks, 28, had no receptions after the first half as the Texans offense stumbled in every way except for holding onto the football.

After playing inside all season, Tytus Howard moved to the edge in a loss to Jets

Who Was Texans' Best Player In Loss To Jets?

The Texans had just two completions after the first half on 10 passes for 13 yards.

Acquired in a trade from the Los Angeles Rams last year, has a career 13.9 average and is down to 11.2 yards per reception this season while playing six starts with rookie quarterback Davis Mills.

Cooks ranks third in the NFL with 15 first downs produced on third downs, trailing only the Kansas City Chiefs’ Tyreek Hill and the Minnesota Vikings’ Justin Jefferson with 21 apiece in that category. The Texans, though, didn’t even try a pass over 20 yards against Tennessee and finished 6 of 17 on third down for a 35.3 success rate.

“Yeah, I definitely think his role will get back,” Taylor said. “Obviously, he’s our best receiver and he’s a guy that’s played at a high level for a number of years in this league. Our passing game runs through him. We have to obviously get him the ball to allow him to create plays down the field, even short game as well, too.

The New York Jets, Sunday’s opponent at NRG Stadium, rank 32nd in pass defense and have allowed 50 catches of 20 yards or longer.

“I mean you see that, but at the same time, it looks more like a communication thing because those guys fly around on that defense and they play at a high level,” Cooks said. “ When you see something explosive, obviously they are there but those guys can run, and they also stop that consistently. We look forward to it.” 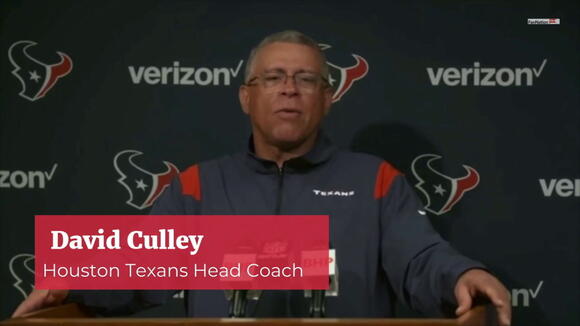 NFL TV ratings, a look forward: The NFL Playoffs have arrived, following a 2021 regular season that saw interest in
NFL・2 DAYS AGO
Sportsnaut

Now-retired quarterback Josh McCown played for nine different teams in his NFL career. While he never got into a game
NFL・1 DAY AGO
TexansDaily

HOUSTON -- Running back will be a need for the Houston Texans in 2022. One name won't able to change the outlook right away, but it does mend the issue on paper. In the latest two-round mock draft by The Athletic's Dane Brugler, the Texans use the third overall pick on Oregon edge rusher Kayvon Thibodeaux. With the 37th pick, Houston looks to bolster its run game with the addition of Michigan State running back Kenneth Walker III.
NFL・1 DAY AGO
TexansDaily

After a disappointing 2021 season, the Houston Texans are forced to start looking at 2022. That process - which will soon include a new head coach - starts with a new schedule. How does the scheduling format work?. Six games are made up from their AFC South opponents (home and...
NFL・20 HOURS AGO

HOUSTON -- Fans might want to hear otherwise, but Houston Texans general manager Nick Caserio doesn't care. He can't care this time around when looking to hire the Texans next head coach. It could be his last chance at making as a monumental shift in the franchise's history. Caserio was...
NFL・2 DAYS AGO
Insider

Just eight teams remain in the fight for Super Bowl LVI. This week, we're backing the Packers and Chiefs to cover the spread.
NFL・2 DAYS AGO
Sportsnaut

The Minnesota Vikings are cleaning house this offseason, putting the future of quarterback Kirk Cousins in the spotlight. If the
NFL・1 DAY AGO
Sporting News

And then there were eight. The first round of the NFL playoffs has come to a close, with all the division champions winning their first-round matchups except the Cowboys to set up the divisional round of the playoffs. The next wave of NFL action starts on Saturday, with both the...
NFL・13 HOURS AGO

Wrapping up their season with a 23-point loss to their NFC West Division rivals, the Arizona Cardinals could look to
NFL・1 DAY AGO
CBS Sports

Dallas Cowboys owner and de facto general manager Jerry Jones is frustrated with a whole lot of things after his team's disappointing opening-round playoff loss to the San Francisco 49ers. Among the things disappointing him at the moment is wide receiver Amari Cooper. "Amari Cooper should take half the field...
NFL・1 DAY AGO
Sportsnaut

The 2021 season for the Arizona Cardinals season finale was about as ugly as it gets. Maybe there would be
NFL・1 DAY AGO
The Spun

Jim Harbaugh Rumored To Be Considering At Least 2 NFL Jobs

The Jim Harbaugh to the NFL rumors are heating up this week. On Wednesday night, Bruce Feldman reported that sources inside Michigan football told The Athletic they think Harbaugh would accept the Las Vegas Raiders job if offered it. “They also know that Harbaugh can be hard to read,” Feldman...
NFL・1 DAY AGO

We’re just over 24 hours away from the Packers-49ers matchup in the NFL Divisional Round. And the weather forecast isn’t looking too hot. Packers wide receiver Davante Adams looked at tomorrow’s weather report for Green Bay, Wisconsin this morning. The temperature right now is minus-6 – not even accounting for wind chill – and dropping to minus-9 later in the day.
NFL・1 DAY AGO
Sportsnaut

The Michigan Wolverines finally returned to glory in 2021, winning their first Big Ten Conference title since 2004 and earning
NFL・21 HOURS AGO
The Spun

Just a few days ago, Dallas Cowboys quarterback Dak Prescott made headlines with a controversial comment he made about the officials from Sunday’s game. Following the 23-17 loss to the San Francisco 49ers, Cowboys fans threw objects onto the field, expressing their anger with the officiating crew. After learning fans threw objects at the officials, Dak responded, “Credit to them.”
NFL・1 DAY AGO
The Spun

The post-Ben Roethlisberger era in Pittsburgh has commenced. Big Ben played in what’s expected to be his final NFL game last weekend in a postseason loss to the Kansas City Chiefs. Now, all eyes in Pittsburgh turn to the future of the team’s quarterback position. Danny Kanell has...
NFL・2 DAYS AGO

The Baltimore Ravens made a very surprising coaching move on Friday evening with the decision to fire defensive coordinator Don “Wink” Martindale. Baltimore announced the news with a statement from head coach John Harbaugh, who said that he and Martindale “have agreed to move forward in separate directions.”
NFL・20 HOURS AGO
Sports Illustrated

The virus caused a shift in the broadcast pairing for the network during this weekend's divisional round game.
NFL・23 HOURS AGO
Sportsnaut

The Ravens have fired defensive coordinator Don “Wink” Martindale, a surprising shakeup that comes less than two weeks after the end of a disappointing season. In a statement the Ravens released Friday, coach John Harbaugh said that he and Martindale, who had one year remaining on his contract in Baltimore, had “agreed to move forward in separate directions.” “We have had a great run on ...
NFL・22 HOURS AGO