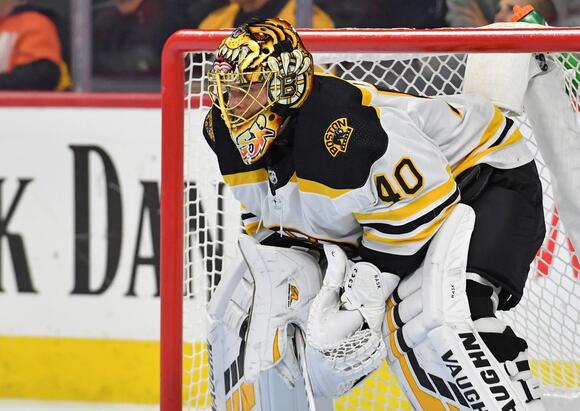 Sean McDonough had the call of Friday’s Black Friday matinee between the Bruins and Rangers on ABC, and he had a fairly notable update to share.

Rask has been skating and working out at Warrior Ice Arena as he works his way back from offseason hip surgery, using the Bruins’ facility and working with some staff. He has not signed a contract yet and remains a free agent.

Rask told The Greg Hill Show in August that he was aiming for Christmas or early January for a return, which was about a month earlier than initial reports on his timeline. There hadn’t really been any update on his timeline recently, but his comments to McDonough suggest he has remained on the same track he believed he was on in August.

Rask saying he still hopes his return will be with the Bruins is not surprising, as that’s what he has said all along, but it’s worth noting that it does come on the heels of a report that Rask might be willing to consider offers from other teams .

It seems like he would only consider those offers if the Bruins decide they don’t want him back. The Bruins have said all along that the door is open for Rask to return, but that doesn’t necessarily mean they will definitely re-sign him when the time comes to make a decision.

The Bruins have gotten below-average goaltending on the whole from the tandem of Linus Ullmark and Jeremy Swayman. If that were to remain the case, bringing back Rask would seem like a no-brainer, even though it would create some complications in terms of making sure everyone is playing enough. They could choose to send Swayman down to Providence, as he doesn’t need to go through waivers.

The decision could become a little tougher if Swayman and Ullmark pick up their play over the next few weeks, or if Swayman is playing well and Ullmark is still struggling. The Bruins are limited in what they can do with Ullmark given his contract.

Despite a slew of COVID-19 postponements, the interruptions have hardly stopped Auston Matthews’ ability to score goals — especially in
NHL・2 DAYS AGO
WEEI Sports Radio

Brad Marchand injured by Garnet Hathaway's hit from behind

The Boston Bruins will look for a return to normalcy when they host the Washington Capitals on Thursday night. The
NHL・1 DAY AGO
WFAN Sports Radio

Toronto Maple Leafs defenseman Jake Muzzin will miss the team’s visit to New York after being diagnosed with a concussion.
NHL・2 DAYS AGO

Centers Steven Stamkos of the Tampa Bay Lightning, Nazem Kadri of the Colorado Avalanche and Mika Zibanejad of the New York Rangers, and Anaheim winger Troy Terry have won the final roster spots for the NHL's All-Star Weekend as a result of fan voting
NHL・2 DAYS AGO
Los Angeles Times

Anze Kopitar had a power-play goal and Jonathan Quick made 23 saves in the Kings' 4-1 loss to the Avalanche. L.A.'s Quinton Byfield makes season debut.
NHL・6 HOURS AGO
Sportsnaut

Darcy Kuemper had 40 saves, Mikko Rantanen had a goal and an assist, and the visiting Colorado Avalanche beat the
NHL・6 HOURS AGO
Sportsnaut

Schwartz: Islanders ready for a lot of hockey in a short amount of time

The NHL’s schedule update re-scheduled 13 Islanders games, and they will play 43 games in 80 days coming out of the All-Star Break - but they’re going to take it one day at a time.
NHL・14 HOURS AGO
Sportsnaut

Tom Wilson scored 26 seconds into overtime, and the Washington Capitals overcame a two-goal deficit and a late blown lead
NHL・2 DAYS AGO