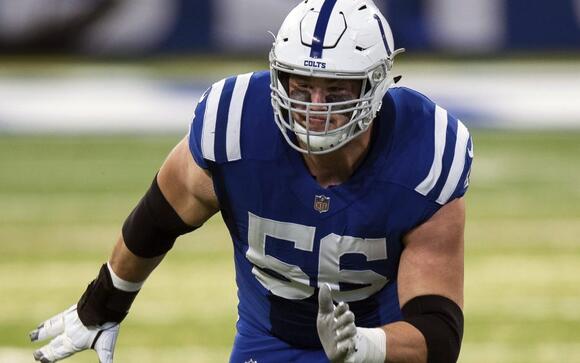 INDIANAPOLIS – Frank Reich’s appreciative mindset flowed past the quality time spent with his family on Thanksgiving.

For a second consecutive week, his Indianapolis Colts are heading into a game – Sunday versus defending Super Bowl champion Tampa Bay at Lucas Oil Stadium – with a relatively healthy 53-player roster.

Nelson’s status was most definitely in doubt.

The three-time first-team All-Pro selection exited last Sunday’s win at Buffalo after aggravating an injury to his right ankle in the third quarter. He first sustained a high sprain to the ankle week 3 against Tennessee and would miss the next three games.

This week, Nelson did not practice Wednesday and did not participate in a Thursday walkthrough.

Reich admitted Nelson is on a “short list’’ of players capable of playing with little or no practice time because of the way he “dials in.’’

“We have a general philosophy that we want to practice, we need to practice,’’ Reich said. “But Quenton has a way of getting himself ready.’’

No time to get complacent

It might have been human nature for the Colts to take more than the so-called 24-hour rule to enjoy last Sunday’s 41-15 blowout of the Bills. It was their fifth win in six games and pushed them over the .500 mark at 6-5 for the first time this season after their 0-3 start.

But the looming visit from the Bucs and Tom Brady demanded everyone’s undivided attention.

“No doubt,’’ Reich said. “We talked about that on Monday that (the team had) no opportunity to be complacent or get too high with the defending world champions coming in with the greatest player every to play coming in.”

“We know we’ve got to be at our best, so we’ve got to have a great week of practice to get ready to go. And I think we did that.’’

Including the playoffs, Brady holds an 15-4 record against the Colts, and it all came during his 20-year career with the New England Patriots.

Listen to the Colts Blue Zone Podcast for weekly coverage and analysis of the Indianapolis Colts.

INDIANAPOLIS – Congratulations to Guerin Catholic’s Aden Cannon for winning the FOX59 Friday Night Fast Break Play of the Game from January 7, 2022. The Golden Eagles’ offense ran to perfection, as a driving Jack Cherry found Cannon on a no-look feed wide open beneath the hoop for the easy dunk.
INDIANAPOLIS, IN・3 DAYS AGO
FOX59

A former Kansas City Chiefs player died Thursday while being held in the U.S. Penitentiary in Leavenworth, Kansas.
NFL・2 DAYS AGO
FOX59

The Chicago Bears will interview Morocco Brown for their GM vacancy. Here’s what to know about the Indianapolis Colts director of college scouting.

The Chicago Bears have reached out to at least 15 general manager and 10 coaching candidates for interviews. As they go through the process, we’re looking at each of the prospects. Morocco Brown will interview for the general manager position Tuesday, according to NFL Network. Morocco Brown Title: Indianapolis Colts director of college scouting Age: 45 Experience GM Chris Ballard hired Brown ...
NFL・2 HOURS AGO

FOX NFL broadcaster and former Cowboy great Troy Aikman didn’t seem to be too happy that he and Joe Buck were in Tampa Bay rather than Dallas. As Buck teased the next Sunday NFC playoff matchup between the Cowboys and 49ers on CBS, Aikman voiced his displeasure with some coded language.
NFL・1 DAY AGO
The Spun

The Kansas City Chiefs officially booked their ticket to a rematch with Josh Allen and the Buffalo Bills in the Divisional Round after blowing out the Pittsburgh Steelers on Sunday. As we all know, Patrick Mahomes and Co. beat the Bills 38-24 last season in the AFC title game and...
NFL・1 DAY AGO

It felt like January 1991 again for Sal Maiorana as Josh Allen and the Buffalo Bills put forth perhaps the best performance in team history.
NFL・2 DAYS AGO
ClutchPoints

The Las Vegas Raiders overcame a myriad of obstacles to make the playoffs this season. As they prepare to face the Cincinnati Bengals, they will have to get serious about the team’s future regardless of the outcome. The most important factor of Las Vegas’ future is the Derek Carr situation.
NFL・2 DAYS AGO

The Pittsburgh Steelers will have to address the quarterback position this offseason for the first time in 18 years. They won’t have that high of a draft pick after reaching the playoffs, so some have wondered if they could explore blockbuster trade scenarios. That does not appear to be the plan.
NFL・1 DAY AGO
WGR550

When it comes to the New England Patriots, we’ve been through so much. Nearly twenty years of domination. Three wins from ‘01 to ‘19. You know a team is in your head when you can remember those three wins without even having to look them up.
NFL・2 DAYS AGO
ClutchPoints

Just like the rest of the Dallas Cowboys fan base, former team quarterback Tony Romo didn’t like how the Wild Card game against the San Francisco 49ers ended. It’s not that Romo is blaming anyone. The Cowboys could have done better in setting up the final play, and the referees might have some shortcomings as well. However, for the four-time Pro Bowler, it was just a frustrating ending for the home team and their fans who were hoping for that miracle to give them the victory.
NFL・1 DAY AGO
The Spun

The Las Vegas Raiders find themselves down 10 to the Bengals in the fourth quarter of their first round playoff matchup. But the team doesn’t get there without the leadership and play of Derek Carr. On Saturday, inactive Raiders running back Kenyan Drake had a message for those still...
NFL・2 DAYS AGO

Tua Tagovailoa’s up-and-down performance through his first two NFL seasons has raised some questions about his status as a longterm franchise QB for the Miami Dolphins. But on Saturday, reports from NFL Network insider Ian Rapoport indicated that the team is sticking by their former No. 5 overall pick.
NFL・2 DAYS AGO
Fox News

The Pittsburgh Steelers are a mighty underdog against the Kansas City Chiefs on Sunday night in their AFC wild-card playoff game. Steelers head coach Mike Tomlin took it up a notch when he was asked by NBC’s Michelle Tafoya about what adjustments were needed for Pittsburgh to avoid being blown out and possibly upsetting Kansas City in the game.
NFL・1 DAY AGO
Falcon Report

Tony Romo didn’t like how Cowboys quarterback Dak Prescott handled the end of the game on Sunday. After Prescott slid at the 25-yard line, he hurried up to the line with the center but didn’t find the ref so he could properly spot the ball. Romo confirmed during...
NFL・21 HOURS AGO