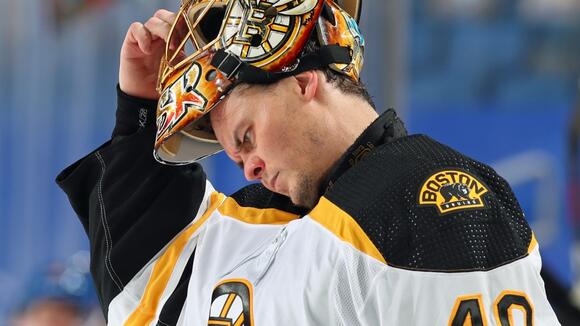 BOSTON (CBS) — The Bruins’ annual day-after-Thanksgiving matinee brought with it some news about their former goaltender … and perhaps their future goaltender.

Early in the second period, play-by-play announcer Sean McDonough revealed that he spoke with Tuukka Rask on Thursday night.

Rask told McDonough that his rehab from surgery to repair a torn hip labrum is “going very well,” and that he’ll begin ramping up his skating beginning next week.

“He hopes that he can play as early as January,” McDonough said of Rask, who also noted his desire to play for the Bruins.

That update has Rask on the general timeline that he laid out when he spoke to the media at the end of last season. He has been seen on the ice at the Bruins’ practice arena, working out on his own. That hasn’t been a team-sponsored activity, of course, but the location of those workouts indicates that the team and the goaltender maintain a relationship.

How a Rask reunion would work remains difficult to figure. The team signed Linus Ullmark to a four-year, $20 million contract as a free agent in the offseason. That contract includes a no-move clause for this season and next season, meaning he can’t be sent to the AHL.

The Bruins also have Jeremy Swayman, who’s unofficially become the team’s No. 1 netminder. Swayman’s start on Friday gave him 10 on the season, compared to Ullmark’s seven starts. Swayman has a better record (6-3-0, compared to 4-3-0), save percentage (.914 to .908), and GAA (2.23 to 2.87) than Ullmark. Swayman would be eligible to get sent to the AHL if the team were to re-sign Rask, but demoting the team’s best goaltender might not be particularly ideal.

Despite that difficult scenario, the Bruins have maintained all year long that the “door is open” for Rask to return if and when he’s ready. The rubber seems close to hitting the road for that mechanisms of that scenario to actually begin.

The NHL season officially started back on October 12. In this article, we track all the NHL games today as
NFL・16 HOURS AGO
NESN

BOSTON — The Boston Bruins put together an ugly start in which they looked oddly disengaged, and they were never able to recover en route to a 5-3 loss to the Anaheim Ducks at TD Garden. The Bruins, who have won 10 of their last 13 games, fell to...
NHL・1 HOUR AGO
NESN

Bruins goaltender Tuukka Rask is in the positive since his return from hip surgery. The veteran goalie played in his third game of the season in Boston’s 3-2 win over the Winnipeg Jets on Saturday afternoon — with the team improving to 2-1 in games he’s started.
NHL・2 DAYS AGO
NESN

Tuukka Rask Came Through With Timely Saves In Bruins Win Vs. Jets

Tuukka Rask settled down after the first period to play strong the rest of the way Saturday. The Boston Bruins have now won 10 out of 12 with the 3-2 victory against the Winnipeg Jets. Rask had a tough first period before coming up with some huge saves when Boston needed it most in the final two periods.
NHL・2 DAYS AGO

By Michael Hurley, CBS Boston BOSTON (CBS) — With right tackle Tristan Wirfs out of Sunday’s game, Tom Brady knew going into the Buccaneers’ playoff game that he was due to get hit by the Rams’ potent pass rush. But that didn’t mean he was going to be happy about it. So when Brady absorbed a shot that he felt violated the rules, he wanted a penalty called on the offending party. After Von Miller delivered a shot to Brady’s chest and facemask, Brady turned to referee Shawn Hochuli while pointing to his chin. Hochuli didn’t give Brady the flag he was looking for, leading...
NFL・1 DAY AGO
CBS Boston

By Michael Hurley, CBS Boston BOSTON (CBS) — What is a once-in-a-lifetime comeback if it happens twice? What is the level of heartbreak reached when that comeback is completed, only for it to all be rendered meaningless in a flash of a few seconds? And what in the wide freaking world of sports is there to say about the football game that took place in Tampa on Sunday afternoon? It was a game which the Bucs lost to the Rams countless times. While falling behind 10-0, then 20-3, they were toast. In failing to protect Tom Brady, in blowing coverages against Cooper Kupp and getting...
NFL・23 HOURS AGO
Sports Illustrated

Brady will reportedly take some time to decide whether he will play football again.
NFL・1 DAY AGO

P.K. Subban said he felt accountability to call out recent racist actions in hockey because he has established a platform to inspire better behavior.
NHL・11 HOURS AGO
Sportsnaut

Vegas Golden Knights winger Reilly Smith is one of the hottest names leading up to the NHL trade deadline. With
NHL・9 HOURS AGO
Sportsnaut

This past week, the Boston Bruins honored Willie O’Ree by retiring his No. 22 and lifting it high into the TD Garden rafters. But that is not enough. O’Ree was The post Minton: The NHL needs to retire Bruins legend Willie O’Ree’s number appeared first on Itemlive.
NHL・1 HOUR AGO
WFAN Sports Radio

Ryan Pulock has now missed 22 games and counting with a lower body injury, but if there’s a silver lining to his absence, Peter Schwartz writes that it’s the emergence of Robin Salo and Noah Dobson.
NHL・7 HOURS AGO
Chicago Tribune

Kevin Lankinen is back on the shelf seemingly as quickly as he returned. The Chicago Blackhawks placed the backup goalie on injured reserve Sunday with a right hand injury a day after he made 40 saves during a 4-3 overtime road loss to the Minnesota Wild. Lankinen appeared in each of the Hawks’ last two games, his first action since returning from COVID-19 protocols. Before that, his last ...
NHL・1 DAY AGO
USA TODAY

In a discussion about injuries, NHL great Bobby Orr once told Philadelphia Flyers defenseman Keith Yandle: “If you can skate, you can play.’’
NHL・15 HOURS AGO
San Diego Union-Tribune

Keith Yandle tied the NHL record for consecutive games played with 964 and the Philadelphia Flyers tied a franchise record with their 12th straight winless game, losing 3-1 to the Dallas Stars on Monday night.
NHL・10 MINUTES AGO
Sportsnaut

Keeping pucks out of the net continues to be an issue for the Columbus Blue Jackets and Ottawa Senators. With
NHL・1 DAY AGO
Sportsnaut

The Florida Panthers, who are tied for the NHL lead with 61 points, have one glaring flaw. It’s their road
NHL・8 HOURS AGO