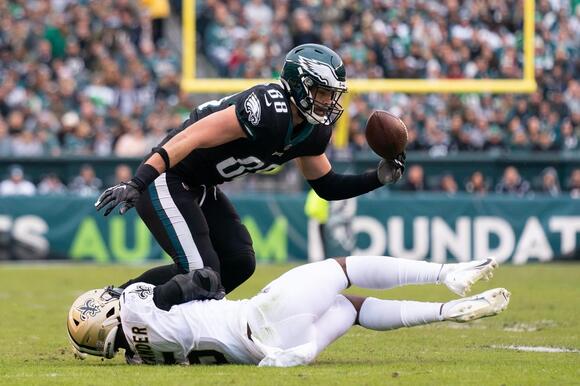 Discover player props odds, plays, and insights for Dallas Goedert in his Week 12 contest with the Philadelphia Eagles against the New York Giants.

In advance of Sunday's game, here are the key stats and trends you need to know about Dallas Goedert and his player prop bet options. He'll take the field starting at 1:00 PM ET on FOX. Goedert's Philadelphia Eagles (5-6) and the New York Giants (3-7) meet in a Week 12 matchup between NFC East foes at MetLife Stadium.

Column: The Chicago Bears’ meticulous search for a GM and head coach hasn’t put them behind the rest of the NFL. But time — and wins and losses — will be the judge of their process.

Ten Non-Super Bowl Story Lines to Follow in the NFL

Over the next few weeks, you’re going to see a great deal of content on this site devoted to the four teams remaining in the NFL playoffs. If you’re a fan of one of the other 28, that can be a bit of a drag. So, as we head into the meat of conference title game coverage and the two-week long colonoscopy that is Super Bowl coverage, we wanted to devote some space to 10 story lines regarding the rest of the NFL that matter a great deal. Some of you will be stressing out the result of head coaching searches. Some of you will have an eye on the quarterback contract market. We’re going to bottle that all up into one fountain soda combination sure to make your stomach rumble.
NFL・3 HOURS AGO

While the 2022 NFL Draft class is not viewed as strong by many, that doesn’t mean the Eagles feel the same way. It also doesn’t mean the narrative it is a weak quarterback class is right.
NFL・1 HOUR AGO
Chicago Tribune

The weekend slate of NFL playoff games was more than just riveting television for Chicago Bears fans. Five coordinators under consideration for the Bears head coaching job coached in the games. One executive in the running to be the Bears general manager saw his team advance to the AFC championship game. And one longtime thorn in the Bears’ side ruminated about what’s next after his loss. As ...
NFL・19 HOURS AGO
Sports Illustrated

The theme song to the television show The Golden Girls was going to be Bette Midler’s song “Friends,” rather than the iconic “Thank You For Being a Friend” by Andrew Gold. There's just one letter in the alphabet that doesn't appear in any U.S. state's...
NFL・58 MINUTES AGO
Sportsnaut

Super Bowl 2022: The Tampa Bay Buccaneers are the reigning NFL champions, but who'll make the playoffs — and lift the Lombardi Trophy at the end of this season?
NFL・1 DAY AGO

NFL picks against the spread. NFL Championship Sunday edition. And then there were four. With three road teams winning on
NFL・1 DAY AGO
The Spun

Josh Allen and Patrick Mahomes will square off for the second straight postseason, as the Bills and Chiefs are set to kickoff this Sunday night. Last year, the Chiefs defeated the Bills in the AFC Championship. Mahomes had 325 passing yards and three touchdowns in that game. The Bills avenged...
NFL・2 DAYS AGO
Sports Illustrated

After dueling back-and-forth to produce an instant classic of a playoff game, quarterbacks Patrick Mahomes and Josh Allen had nothing but respect for one another after the final whistle sounded. Mahomes and Allen put together a shootout that would make the Big 12 blush, leading their offenses for a combined...
NFL・1 DAY AGO
The Spun

The Kansas City Chiefs beat the Buffalo Bills, 42-36, in overtime at Arrowhead Stadium on Sunday evening. The game was a wild one, with several lead changes in the game’s final two minutes. Ultimately, the Chiefs were able to force overtime, before scoring the game-winning touchdown on a pass from Patrick Mahomes to Travis Kelce.
NFL・1 DAY AGO

The Tampa Bay Buccaneers have cut a veteran running back to open up a roster spot ahead of Sunday’s Divisional Round game. The Bucs advanced to the Divisional Round this weekend by beating the Eagles last Sunday afternoon. Now, they have a date with the Los Angeles Rams, who may have had the most dominant playoff performance of the Wild Card round.
NFL・2 DAYS AGO
zonecoverage.com

Never mind the special teams blowing the game, a predictable outcome for anyone who watched a single minute of Green Bay Packers football this year. Set aside the solid defensive performance from a unit that didn’t give up a single offensive touchdown to the San Francisco 49ers on Saturday night. Ignore the fact that Mo Drayton only fielded 10 players against what would be the game-winning field goal. Disregard the stellar receiving performances from Davante Adams and Aaron Jones, the only players besides Dominique Dafney with more than one target. (Dafney had two.)
NFL・21 HOURS AGO
The Spun

Former Buccaneers wide receiver Antonio Brown just couldn’t help himself after his former team lost an absolute heartbreaker on Sunday. While Tampa Bay fans still were freshly mourning their season being over after a 30–27 loss to the Rams in the divisional round, Brown posted a meme on Twitter. And he reminded everyone of his own dramatic exit from the season.
NFL・1 DAY AGO
Larry Brown Sports

The Los Angeles Rams used a huge play late to stun the Tampa Bay Buccaneers on Sunday, and quarterback Matthew Stafford was well aware of how it happened. Stafford found wide receiver Cooper Kupp for a 44-yard gain that set the Rams up in field goal range just before time expired in the fourth quarter. The play came against what was supposed to be an all-out blitz, which left Kupp alone with safety Antoine Winfield Jr. In a one-on-one matchup, Kupp was always going to win. You can see the play in question here.
NFL・1 DAY AGO
Ok Magazine

All eyes have been on Aaron Rodgers after the Green Bay Packers lost their playoffs game 10-13 over the weekend. The team lost to the San Francisco 49ers on Saturday, January 22. The 38-year-old admitted after the game that he was feeling "numb," telling reporters: "I didn’t think it was gonna end like this," per Fox News.
NFL・1 DAY AGO
The Spun

Mike Vrabel refused to throw his quarterback under the bus following the Tennessee Titans’ embarrassing loss to the Cincinnati Bengals on Saturday afternoon. Ryan Tannehill, the 33-year-old veteran, was awful in the Titans’ 19-16 loss to the Bengals. He threw three picks during the outing, two of which led to field goals by Cincinnati.
NFL・2 DAYS AGO
Sports Illustrated

Tampa‘s former receiver had some words for Brady ahead of Sunday‘s divisional round matchup.
NFL・1 DAY AGO