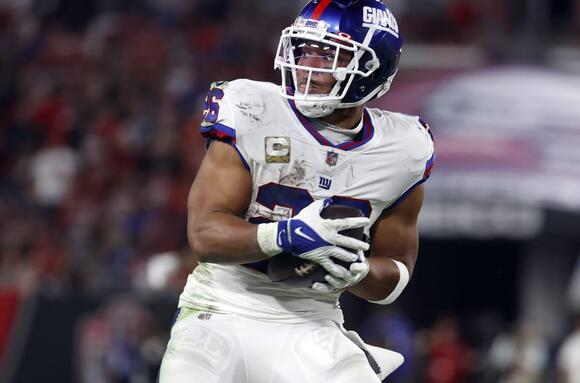 Discover player props odds, plays, and insights for Saquon Barkley in his Week 12 contest with the New York Giants against the Philadelphia Eagles.

Ahead of Sunday's game, here are the key stats and trends you need to know about Saquon Barkley and his player prop bet options. He'll take the field starting at 1:00 PM ET on FOX. Barkley's New York Giants (3-7) and the Philadelphia Eagles (5-6) meet in a Week 12 matchup between NFC East rivals at MetLife Stadium.

You can rule out at least one trade destination for Houston Texans star quarterback Deshaun Watson this offseason. Watson, who did not play in 2021 as he faced several allegations of sexual misconduct, could be traded this offseason. His future in the National Football League likely depends on the results of his sexual allegations. However, many continue to speculate about potential trades.
NFL・1 DAY AGO
Falcon Report

After winning their second Super Bowl in team history last year, the Tampa Bay Buccaneers are one of 20 franchises
NFL・1 DAY AGO
Sportsnaut

Well there goes the idea of trading for Deshaun Watson. Based on the introductory press conference by new general manager
NFL・1 DAY AGO

Brandon Brooks retires from NFL, but Eagles OL was known for much more than crushing blocks

NFL TV ratings, a look forward: The NFL Playoffs have arrived, following a 2021 regular season that saw interest in
NFL・2 DAYS AGO
EagleMaven

Who Stays, Who Goes: Offensive Tackles

The Eagles have perhaps the most talented offensive tackle group in the NFL with All-Pro level bookends in Lane Johnson and Jordan Mailata, as well as another starting-level LT in Andre Dillard. From there, Jeff Stoutland has a competent swing tackle option in Le’Raven Clark and the significant depth continues...
NFL・16 HOURS AGO
105.3 The Fan

Yes, Sean Payton will be the next Cowboys HC

I’ve got the latest on the Sean Payton to Dallas rumors and when they’ll likely come to fruition. Plus the future of Amari Cooper, Tyron Smith, Dan Quinn, La’el Collins and more with this team.
NFL・1 DAY AGO

Just days after the end of the Green Bay Packers’ season, the team has added a quarterback to their QB room. According to NFL reporter Dov Kleiman, the Packers have signed former LSU product Danny Etling. “Packers signed a new QB,” Kleiman tweeted. “Former Patriots Danny Etling, per his...
NFL・2 DAYS AGO
The Spun

NIL opportunities continue to be a driving force for recruits committing to play for Deion Sanders. And on Thursday morning, Coach Prime’s son Shedeur got to reap some of the benefits of playing under his dad’s Jackson State program. According to reports from Front Office Sports, the Tigers’...
COLLEGE SPORTS・21 HOURS AGO
WEEI Sports Radio

Is Tom Brady suddenly thinking about retirement due to the ‘turmoil’ in Tampa Bay?

Tom Brady says he’s thinking about retirement because he wants to put his family first. But the reported turmoil with the Buccaneers may play a bigger role in his decision.
NFL・2 DAYS AGO
95.7 The Game

49ers defensive coordinator DeMeco Ryans could emerge as a top head-coaching candidate with the Minnesota Vikings, as a former SF executive could be the general manager.
NFL・2 DAYS AGO

Deshaun Watson trade to the Carolina Panthers: How it might look

Once the 2021 NFL season comes to a conclusion, Houston Texans quarterback Deshaun Watson will join other players in being
NFL・2 DAYS AGO
The Spun

Shortly after two head coaching vacancies were filled on Thursday morning, it was reported that Dan Quinn will return to the Dallas Cowboys for the 2022 season. Quinn was considered a popular coaching candidate for this year’s cycle because of the success he had as the Cowboys’ defensive coordinator. Some fans were a bit surprised that he would return to Dallas for another year.
NFL・18 HOURS AGO
USA TODAY

Tennessee legend Peyton Manning was a ballyhooed recruit in 1993. On one Sunday, he fielded 23 calls from coaches. Now, nephew Arch has the spotlight.
NFL・2 DAYS AGO
News 5 Cleveland WEWS

Following the Tampa Bay Buccaneers‘ exit from the playoffs last weekend, rumors about Tom Brady retiring have started to run rampant. The 44-year-old quarterback poured gasoline on the first with a cryptic Instagram post on Tuesday. Two days after the Bucs’ divisional-round playoff loss to the Los Angeles Rams,...
NFL・1 DAY AGO
Sportsnaut

Super Bowl 2022: The Tampa Bay Buccaneers are the reigning NFL champions, but who'll make the playoffs — and lift the Lombardi Trophy at the end of this season?
NFL・1 DAY AGO
USA TODAY Sports Media Group

The Baltimore Ravens ended their 2021 season on a six-game losing streak and now turn their attention to the 2022 offseason. They will have many opportunities to improve their roster over the coming months, as they have a few big needs that need to be taken care of. One position...
NFL・1 DAY AGO
Sportsnaut

A number of NFL futures bets can be placed throughout the 2021 NFL season, but Super Bowl odds are where
NFL・1 DAY AGO