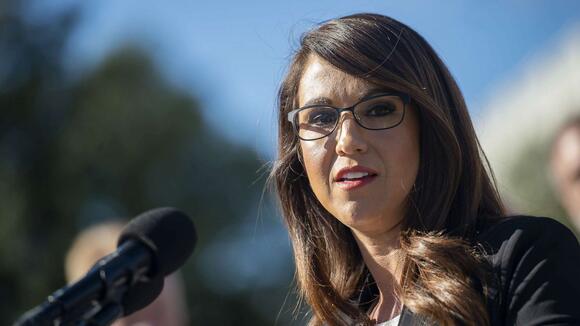 Rep. Lauren Boebert (R-Colorado) issued an apology on Friday for remarks she made that used anti-Muslim tropes to refer to Rep. Ilhan Omar, a Democratic representative from Minnesota and one of only three Muslim members of Congress.

Omar added that "normalizing this bigotry not only endangers my life but the lives of all Muslims."

In an undated video that went viral on Thursday, Boebert said that she was getting into an elevator with one of her staffers when a Capitol police officer rushed over to the elevator with "fret [sic] all over his face," trying to open the door as it was closing.

She then claimed that, upon seeing Omar to her left, she said: "Well, she doesn't have a backpack. We should be fine," implying that Omar could have been carrying explosives in a backpack -- an anti-Muslim trope.

Boebert also called Omar a part of a so-called "jihad squad" twice in the video.

"I apologize to anyone in the Muslim community I offended with my comment about Rep. Omar. I have reached out to her office to speak with her directly. There are plenty of policy differences to focus on without this unnecessary distraction," Boebert tweeted on Friday.

Omar said on Thursday that Boebert made up the story, and said that anti-Muslim racism should not be allowed in Congress.

"Fact, this buffoon looks down when she sees me at the Capitol, this whole story is made up," Omar tweeted on Thursday night. "Anti-Muslim bigotry isn't funny & shouldn't be normalized. Congress can't be a place where hateful and dangerous Muslims tropes get no condemnation."

Rep. Rashida Tlaib (D-Michigan), another Muslim member of Congress, wrote on Thursday night, "These pathetic racist lies will not only endanger the life of @IlhanMN, but will increase hate crimes towards Muslims. The continued silence & inaction towards this hate-filled colleague and others is enabling violence. It must stop."

One representative across the aisle, Rep. Adam Kinzinger (R-Illinois), retweeted the video with the comment, "Boebert is TRASH." Republican congressional leaders have not commented yet on Boebert's remarks.

Edward Mitchell, deputy director of the Council on American-Islamic Relations, told CNN on Friday morning that Boebert's comments were "beyond the pale."

"You've gotta remember, Lauren Boebert is not some comedian at a club. She is a sitting member of Congress speaking to her constituents... I will say the more disturbing thing is that the audience applauded, and laughed, and that Republican leaders did not condemn this yet," Mitchell said.

No need to apologize, omar leaves a lot to be desired! She hates AMERICA and does not deny it to her credit but she is the one that needs to apologize and be censured.

Omar has NO business representing the United States to begin with! The jihad squad hates America and American citizens! I don't think an apology was necessary. I guess the truth hurts but facts are facts!

Rep Boebert doesn't need to apologize. the comment may have been a little off color, but the just of it is true. Comrade Omar is a detriment to our country. she needs to go.

GRAND JUNCTION, Colo. (KJCT) - Congresswoman Lauren Boebert (R-Colo.), who represents the state’s 3rd Congressional District, was elected to be the communications chair of the House Freedom Caucus. The Freedom Caucus is a group of conservative Republicans in Congress that supports limited government and the Constitution, according to the...
GRAND JUNCTION, CO・5 DAYS AGO
HuffingtonPost

Rep. Lauren Boebert (R-Colo.), who has a history of propping up conspiracy theories and instigating religious attacks, asked a group of Jewish people touring the U.S. Capitol on Thursday if they were there to do “reconnaissance,” BuzzFeed News reported. According to those present for the conversation, Boebert crossed...
CONGRESS & COURTS・5 DAYS AGO
coloradopols.com

Anyone Left To Offend? Lauren Boebert Just Can’t Help Herself

Media outlets in Israel overnight picked up on a Buzzfeed story yesterday, documenting an encounter in a U.S. Capitol elevator between freshman GOP controversy vortex Rep. Lauren Boebert and a group of Orthodox Jews on a tour of the building that…well, read it for yourself:. Members of the group,...
CONGRESS & COURTS・5 DAYS AGO
Salon

Rep. Lauren Boebert (R-CO) wears a 'Make America Great Again' hat as she leaves the U.S. Capitol (Drew Angerer/Getty Images) Rep. Lauren Boebert, R-Colo., made a series of bizarre remarks to a group of Jewish visitors at the U.S. Capitol Thursday morning, BuzzFeed reported, asking them if they were doing "reconnaissance" while stopping to look them over "from head to toe."
CONGRESS & COURTS・6 DAYS AGO

A federal elections agency has tossed a complaint alleging that US Rep Ilhan Omar used campaign funds to finance her affair with a political consultant she later married.The US Federal Election Commission (FEC) voted unanimously, 6-0, at a meeting in December that it found no wrongdoing from the Democratic congresswoman.The ruling closed the investigation and threw out a complaint filed by right-wing think tank National Legal & Policy Center back in 2019.The think tank accused the “Squad” member of illegally using campaign funds to pay for personal travel expenses for Tim Mynett.Mr Mynett runs political consulting firm E Street Group,...
CONGRESS & COURTS・9 DAYS AGO
Southern Minnesota News

MINNEAPOLIS (AP) — The Federal Election Commission has tossed out a 2019 complaint against Rep. Ilhan Omar from a conservative group alleging the Minnesota Democrat illegally spent campaign funds on her now-husband’s political consulting firm. The complaint from the Virginia-based National Legal and Policy Center questioned whether Omar’s...
CONGRESS & COURTS・9 DAYS AGO
KJCT8

In a move certain to disappoint right-wing conspiracy theorists, the Federal Election Commission ruled in a rare unanimous decision this week that Rep. Ilhan Omar (D-MN) did not, in fact, use campaign cash to help fund her affair with a Democratic consultant she eventually married. The ruling tossed a complaint...
CONGRESS & COURTS・11 DAYS AGO

Federal election officials have rejected a complaint from a conservative watchdog that accused Rep. Ilhan Omar of improperly using campaign funds on an alleged affair. The complaint, which was filed with the Federal Election Commission (FEC) in August 2019, has been unanimously dismissed, multiple reports say. The National Legal and...
CONGRESS & COURTS・11 DAYS AGO
DesignerzCentral

Who Is Jayson Boebert, Husband Of Outspoken Congresswoman Lauren Boebert

Colorado Representative Lauren Boebert is well known by many for how outspoken and passionate she is when it comes to her political opinions. We know about her policies, but what about her personal life? What do we know about her husband, Jayson Boebert?
COLORADO STATE・3 DAYS AGO
The Guardian

Liz Cheney among those to condemn remarks by former House speaker as committee member Zoe Lofgren says: ‘I think Newt has really lost it’
CONGRESS & COURTS・2 DAYS AGO
wtvbam.com

(Reuters) – Robert F. Kennedy Jr on Tuesday apologized for remarks he made over the weekend in which he invoked the Holocaust while speaking at an anti-vaxxer rally. At the rally on Sunday in Washington opposing vaccination mandates against COVID-19, the lawyer and son of the slain U.S. Senator Robert F. Kennedy said, “Even in Hitler’s Germany you could cross the Alps into Switzerland, you could hide in an attic like Anne Frank did.”
CONGRESS & COURTS・1 DAY AGO

Ten days ago, freshman GOP Rep. Lauren Boebert’s campaign launched a wildly negative pre-emptive attack on her newly-filed primary opponent state Sen. Don Coram, broadcasting early her campaign’s well-grounded fear of a qualified Republican opponent. Much to the delight of Boebert’s detractors, Coram has demonstrated in this initial exchange of rhetorical fire that he has no intention of sitting passively while Boebert unleashes the trademark factually-challenged rageaholism against a fellow Republican that has typified her time in the public spotlight so far.
GRAND JUNCTION, CO・2 DAYS AGO
Mic

Lauren Boebert does some casual antisemitism as a hilarious “joke”

Colorado Rep. Lauren Boebert is a woman of many talents — a gun-totin’, bloody diarrhea-givin’, rootin’ tootin’ seditionist with the uncanny power to somehow miss seeing her not-yet-husband exposing himself to a group of minors. But did you know she’s also a hilarious comedienne? Or,...
COLORADO STATE・5 DAYS AGO
Business Insider

The January 6 committee asked Kevin McCarthy to take part, but he refused and called the group "illegitimate."
CONGRESS & COURTS・13 DAYS AGO
WCPO 9 Cincinnati

The senator brushed off his previous phrasing as “sloppy” and “frankly dumb.”
CONGRESS & COURTS・19 DAYS AGO
MarketWatch

There had been speculation that the 81-year-old California Democrat would retire at the end of her current term.
CALIFORNIA STATE・22 HOURS AGO
Newsweek

The former president is currently leading the Florida governor by an average of 38 percentage points.
PRESIDENTIAL ELECTION・1 DAY AGO
The Independent

House Speaker Nancy Pelosi has announced her intention to run for re-election, extending a career in the House of Representatives spanning more than three decades, ahead of a midterm election battle that could determine the balance of power in Congress.The California congresswoman – who is serving her 17th term in the House, and fourth term as speaker – made the announcement on her campaign’s social media channels on 25 January.While we have made progress much more needs to be done to improve people’s lives. This election is crucial: nothing less is at stake than our Democracy.But we don’t agonize-we...
PRESIDENTIAL ELECTION・22 HOURS AGO