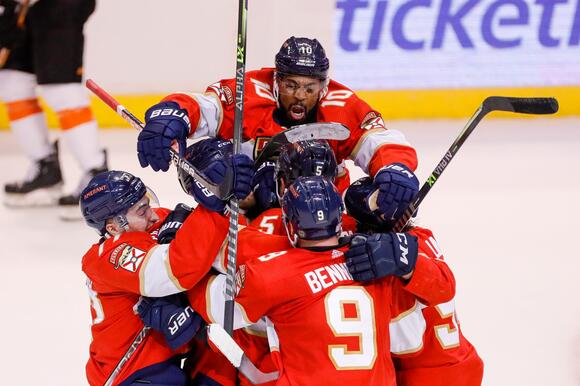 I’ve always said that the best thing about sports- professional, collegiate, high school, any level- is that when you check out a game, you really may see something you’ve never seen before. Well, tomorrow night at FLA Live Arena, you have a chance to see something the NHL has never seen before: a 12-game home win streak to start a season. Only the current edition of the Panthers, and Hall of Famers Bobby Hull, Stan Mikita, Pierre Pilote and Glenn Hall’s ’63-64 Blackhawks have started a season with 11 consecutive home wins! The last time a team had this run of success out of the gate at home, there were six teams in the league. In 1963, the idea of a “Seattle Kraken” had never crossed anyone’s mind! They’ll be in town tomorrow night for the first time, too!

How about Sergei Bobrovsky’s play lately?  It’s early, but it’s not too early to say he’s the Vezina frontrunner at one of the NHL schedule’s major checkpoints, Thanksgiving in the States.  He has appeared in a dozen games, and doesn’t have a regulation loss; he’s 9-0-2, and is the only goalie with at least 10 appearances and a zero in the regulation loss column.  According to the folks at Natural Stat Trick, his 83 saves on 90 “high danger” shots is among the best in the league.  Another stat that sticks out- and the defense can have something to do with this as well- is that Bobrovsky has faced just 34 rebound shots against, according to Natural Stat Trick.  He has only faced 34 rebound shots in 12 appearances in net!  This means the rebounds just haven’t been available; a huge credit to the command Bobrovsky has had of his position and the crease this season.

Hopefully we see you at FLA Live Arena tomorrow!  History could be made!  As I always say… whether you want to go to one game or all the games, by yourself or with all your friends, call 954-835- PUCK, and we’ll set something up for you.  Or, you can get some tickets right on there here website!  With point-and-click access!  Wow, technology!

#DearDoug I'm sure you've seen some really remarkable hockey over the years. Which play or goal have you seen firsthand that you'll never forget?

I’ve been very fortunate to have seen a lot of big milestones, big goals scored by generational players, overtime goals, playoff goals, etc.  But one goal was different than all the others!

January 16, 2016…. American Hockey League action… My Lake Erie Monsters and I were kicking off a three-games-in-three-nights weekend with a Friday night road game against the Chicago Wolves at Allstate Arena in Rosemont, IL.  With about 90 seconds remaining in regulation and the Monsters up 3-1, Chicago’s Magnus Paajarvi dumped a puck in from center ice directly on net.  Our goalie, Reto Berra- who was on a conditioning assignment from Colorado and would later be in the Panthers organization- made the routine save, and without hesitation fired on the empty net at the other end.  He nailed it, dead center, and proceeded to skate to the bench and celebrate with his teammates, which nearly triggered a melee at center ice.  I’ve broadcast 999 professional hockey games as of this morning, and that’s still the only goalie goal I’ve ever seen in-person.

Here’s the highlight, but it’s not my call!  It’s my friends Jason Shaver and Billy Gardner on the Chicago Wolves TV broadcast: https://www.youtube.com/watch?v=wMiJwzVjVR4

How would you describe the difference between regular season and Stanley Cup playoff hockey? Can the Panthers continue to play this way in the postseason?

On top of all that, each team has the same amount of rest each night.  There’s no catching teams on a back-to-back, and no unconventional travel or road trip routing.  Obviously teams take different paths into each playoff series, but once the series starts, both teams are on the same schedule.  Lastly, open ice is more difficult to come by in the playoffs.  Decision-making time is lessened, hits come a bit harder, and typically a lot more is let go by the officiating crew.

Watching this Panthers team, they’re built for whatever type of game is presented on a given night, and Bill Zito has this team built for the playoffs as well.

Is it stuffing or dressing? And to follow up with that: oven roasted, smoked & deep fried turkey… King, Mediocre, Trash… GO! #DearDoug

Stuffing.  Dressing is a liquid condiment that goes on a salad.  I’ve never called Thanksgiving stuffing dressing in my life, nor did I grow up knowing anyone who did.  I knew the term was out there, but it never infiltrated my bubble.

That said, I generally don’t eat the stuff(ing).  It’s pretty onion-y, and I’m not really into that.  The only onions I really enjoy are the ones from White Castle.  I’ll always grab a little bit of stuffing, hoping it’ll be better than whenever the last time I had stuffing was, but it never wows me.  With my turkey, I like anything sweet potato-related, cranberry sauce, and pumpkin pie.

Also, smoked turkey ranks above all.  I’ll even take it a step further and say that any meat that can be smoked should be smoked.  I generally avoid fried stuff if I have an option; I’m not a huge fan of heavy breading or batter.  Oven roasted, to me, will never be bad, but it’ll never blow your doors off with flavor either.  It’s a safe option.  It’s a short pass to the tight end instead of a big shot down the field.

This could stir up some controversy, but brown gravy, on the other hand… absolutely no chance.  Gross… You might as well dump soup on your food at that point.

But if you like gravy, that’s fine!  I don’t mind.  I hope your brown gravy yesterday was delightful, and I hope you have a lot left over for whatever you do with that substance when it’s a day old.

#DearDoug , what is your favorite pop?

First of all, good work Kurt… It’s pop, not soda.  Although I will occasionally say soda for certain descriptions.  Some products have the word soda so ingrained, like club soda.  “Club pop” doesn’t have the same feel.

Anyway, pop is my biggest weakness.  I love carbonation.  I don’t drink the sugary ones; only the “zero” versions.  But my favorites: cream soda, root beer, Faygo Rock & Rye, and really any Faygo products, and I love a good ol’ orange pop.  You can’t beat the taste of a cola with a burger and fries, either.  I even drink a lot of plain carbonated water just because I like the bubbles.

And I can’t forget some of the regional favorites: Vernor’s in the midwest, and Cheerwine in the Carolina’s!  When I visit my parents, I often bring back several 12-packs of Cheerwine and/or Sun Drop.

Thanks for the questions, all!  ‘Til next time…

Islanders veteran Zdeno Chara dropped Flyers defenseman Zack McEwan with an uppercut to the face, then made sure to check if his opponent was OK.
NHL・1 DAY AGO
97.1 The Ticket

Where Raymond goes from here is up to him. He has the inside track for the Calder, and he’s on the path toward a long and successful career in Detroit.
NHL・1 DAY AGO
KMOX News Radio

If you’re looking for fantasy hockey tips for the games ahead, you have come to the right place. As the
NHL・2 DAYS AGO
San Diego Union-Tribune

Brayden Schenn and Ivan Barbashev each had two goals and two assists as the St. Louis Blues came from behind to beat the Nashville Predators 5-3
NHL・2 DAYS AGO
Sportsnaut

Despite a slew of COVID-19 postponements, the interruptions have hardly stopped Auston Matthews’ ability to score goals — especially in
NHL・2 DAYS AGO
KREX

DENVER (AP) — A disputed goal, a questionable hit, and a thrilling finish — the Wild-Avalanche rivalry is still going strong after 19 years. Colorado goaltender Pavel Francouz stopped 25 shots in relief of injured Darcy Kuemper and three more in the shootout, and the Avalanche beat Minnesota 4-3 on Monday for its 14th straight […]
NHL・2 DAYS AGO
CharlotteObserver.com

At 5’10, Smith doesn’t boast the size of his 6’2 younger brother, but he does have a more proven offensive track record. He also plays center.
NHL・1 DAY AGO
Sportsnaut

Tom Wilson scored 26 seconds into overtime, and the Washington Capitals overcame a two-goal deficit and a late blown lead
NHL・1 DAY AGO
Sportsnaut

After the first 20 minutes, it seemed as if the Vegas Golden Knights were going to coast to victory in
NHL・2 DAYS AGO
Sportsnaut

Ryan Strome scored the tiebreaking goal, Chris Kreider scored his 25th of the season and Adam Fox and Ryan Reaves
NHL・17 HOURS AGO

Avs forward Nazem Kadri is headed to the NHL All-Star Game after all after getting voted in by fans through the “Last Men In” vote.
NHL・2 DAYS AGO
Sportsnaut