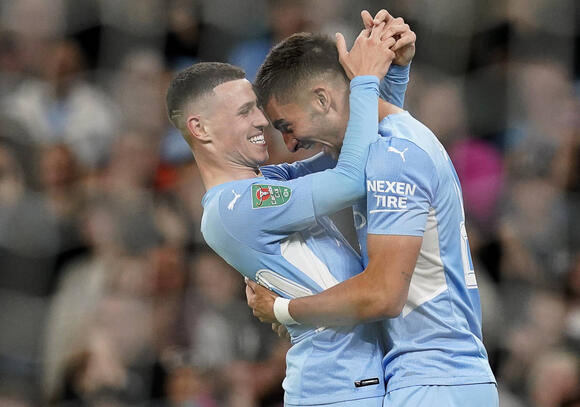 The latest piece of information follows on from previous reports surrounding Barcelona and Manchester City throughout Friday, with the earliest story concerning the Camp Nou club's Director of Football and a trip to the Premier League champions' offices.

While many assumed that the topic of the meeting between the relevant parties concerned the future of Raheem Sterling, fresh developments from reliable sources in Spain have now linked another of Manchester City's forward players with a move to the Camp Nou.

That player is Ferran Torres - and the latest is that the player himself has informed Manchester City and Pep Guardiola of his desire to make the switch and play under Xavi at Barcelona.

This is according to journalist Fernando Polo of Mundo Deportivo, who reports that Torres has asked Guardiola of his desire to leave City for Barcelona - with the coach in turn responding by agreeing to a departure, if an 'economic agreement' can be reached between clubs.

Polo continues by advancing information that states Barcelona's Director of Football Mateu Alemany and CEO Ferran Reverter held a meeting with Manchester City official Ferran Soriano on Thursday - and on Friday, the La Liga club's executives maintained various contacts after 'having everything clear' with Ferran Torres.

An additional update the first report to emerge from Mundo Deportivo then explained that Torres had told Pep Guardiola that he was 'very grateful' for his treatment and for betting on his signing for Manchester.

However, given the opportunity of joining Barcelona, Fernando Polo claims that Torres could not say no and that the Manchester City manager was 'sympathetic' to the player - admitting that when Barcelona or Real Madrid come calling, it is 'normal' for them to consider leaving.

There's a lot to take in here, however it still seems at this stage that any move for Torres from Manchester City to Barcelona is unlikely - especially considering the lack of finances available to the La Liga club.

City also retain the belief that Torres is an integral part of their first-team set-up, and given his abilities of operating in the striker position, their faith in the young Spaniard will not have decreased in any of the recent months.

Bernardo Silva was largely tipped to evolve as David Silva's successor at the Etihad Stadium when the 27-year-old completed a £43 million move to join Manchester City from AS Monaco off the back of a league-winning campaign in France. The Portuguese, who has been arguably Manchester City's best player...
PREMIER LEAGUE・22 HOURS AGO
CityXtra

After Manchester City’s failure to sign Tottenham's Harry Kane last summer, a sensational swoop for the then Juventus forward Cristiano Ronaldo as the club’s potential new striker looked to be on the cards. However, things ultimately failed to pan out that way, and the legendary Portuguese striker made...
2 DAYS AGO
CityXtra

The Algeria superstar was disappointingly knocked out of the Africa Cup of Nations in the group stage on Thursday night, courtesy of a 3-1 defeat against Ivory Coast on matchday three. The defending Africa Cup of Nations champions failed to win a game across three fixtures, and Mahrez - who...
PREMIER LEAGUE・2 DAYS AGO

FIFA have named the world XI of the best players in the world over the past year picked by fans across the globe, with five Premier League players making the star-studded lineup, as confirmed on Thursday. Kevin De Bruyne has been named as part of a three-man midfield alongside Chelsea...
PREMIER LEAGUE・2 DAYS AGO
The Guardian

A drone interrupted play at Brentford, we had a late, late winner at Old Trafford and Newcastle dug in for victory on an eventful afternoon
PREMIER LEAGUE・19 HOURS AGO
CityXtra

On Friday, numerous reports from South America stated that Manchester City were in talks to sign Julián Álvarez - one of Argentina's hottest prospects, with one journalist reporting that a deal was "about to close" for the player to move to England. The 21 year-old was named South...
PREMIER LEAGUE・1 DAY AGO

Pep Guardiola is entering 2022 with just one year remaining on his current contract. Given that the Spanish manager will have completed seven full seasons at the club by 2023, the question remains whether he has yet another extension in mind or will he finally call it a day at Manchester City?
PREMIER LEAGUE・1 DAY AGO
The Independent

Manchester City travel to the south coast on Saturday evening to try and extent their lead at the top of the Premier League by beating Southampton.Saints held Pep Guardiola’s men to a goalless draw back in October but today’s visitors have been in scintillating form in recent months, winning their last 12 consecutive league fixtures and building up a lead of 11 points to second-placed Liverpool and 14 to Chelsea in third.Kevin De Bruyne’s superb curling finish was enough to secure victory over the Blues last time out, and the Belgian could start up front at St. Mary’s with Raheem...
PREMIER LEAGUE・20 HOURS AGO
Tribal Football

Man City boss Guardiola: I won't blindside club when it's time to leave

Manchester City boss Pep Guardiola says he will be open and honest with the club when the time comes for the coach to make a decision on his future. Guardiola's contract with City runs until the end of the 2022-23 season. However, the 51-year-old claims he is not thinking about...
PREMIER LEAGUE・1 DAY AGO
CityXtra

The England international is currently enjoying his best run of form for the Premier League champions in over a year, after what has been a difficult period on the pitch at the Etihad club for the London-born star. The 27 year-old lost his place in the starting XI halfway through...
PREMIER LEAGUE・2 DAYS AGO

At the start of the ongoing season, the 2021/22 campaign was billed to be a four-horse race between Manchester City, Chelsea, Liverpool, and Manchester United. However, fast forward to the Premier League table at this present moment and Pep Guardiola’s side sit an impressive 11 points clear of second-placed Liverpool.
PREMIER LEAGUE・21 HOURS AGO
San Diego Union-Tribune

On Friday, a flurry of reports from both Argentina and England claimed that Manchester City were in talks to sign Julian Alvarez from River Plate, with the 21-year-old out of contract in December. The centre-forward, who recorded 39 direct goal involvements in 46 appearances for River Plate in 2021, has...
PREMIER LEAGUE・15 HOURS AGO
Tribal Football

Pep Guardiola says Manchester City's 12-point lead at the top of the Premier League is beyond his expectations, despite dropping points for the first time since October as Southampton held on for a hard-earned draw at St Mary's. City had won 12 games in a row to open a considerable...
PREMIER LEAGUE・15 HOURS AGO
The Independent

James Ward-Prowse is the best free-kick taker in the world, claims Pep Guardiola

Pep Guardiola believes Manchester City face the best free-kick taker in the world in James Ward-Prowse this weekend.Yet the City boss believes the Southampton captain is far more than a dead-ball specialist.Champions City come up against the England midfielder, who enhanced his set-piece reputation with a stunning strike against Wolves last week, as they travel to St Mary’s Stadium in the Premier League on Saturday.Guardiola said: “He’s the best taker, right now, worldwide. There isn’t a better taker than Ward-Prowse.“But he’s so good at it that maybe you miss his quality as a football player, and the football player is...
PREMIER LEAGUE・1 DAY AGO
Yardbarker

A fan of the Premier League might be right in thinking that Pep Guardiola would be disappointed with dropping points against Southampton. However, the Manchester City boss took the opposite approach and was actually very pleased with his team’s performance labelling it as one of the best of the season.
PREMIER LEAGUE・16 HOURS AGO
The Independent

Runaway leaders Manchester City were denied a 13th Premier League victory in a row after being held to a 1-1 draw by battling Southampton Aymeric Laporte headed a 65th-minute equaliser for Pep Guardiola’s men following a surprise early opener from Saints defender Kyle Walker-Peters.Kevin De Bruyne and Gabriel Jesus struck the same post in the second period but City were unable to find a winner during incessant pressure as they failed to win a top-flight game for the first time since a shock 2-0 loss at home to Crystal Palace way back in late October.The result leaves the reigning champions...
PREMIER LEAGUE・17 HOURS AGO
CityXtra

Given the cutthroat nature of representing Manchester City at the highest level, the club have adopted a tendency to send players on loan, in order to accelerate their development and increase their chances of first-team football. In the 2021/22 season alone, a staggering 36 players from Manchester City have been...
PREMIER LEAGUE・2 DAYS AGO