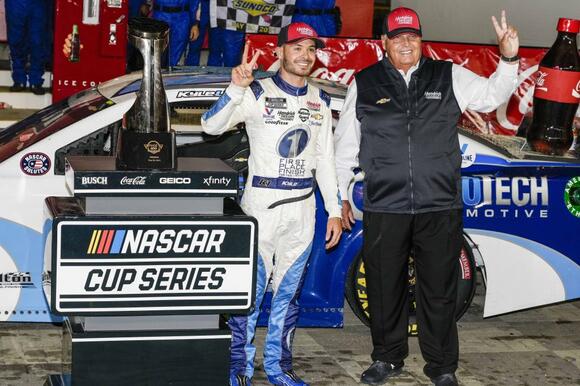 Kyle Larson found himself sitting at Hendrick Motorsports while watching his teammate Chase Elliott win the 2020 NASCAR Cup Series championship. However, this year provided a polar opposite result.

Here’s a look into Larson’s historic year of racing that is still not done yet.

Kyle Larson put together a dominant season for the ages in 2021 that will forever be discussed among the greatest seasons in NASCAR Cup Series history. What are some notable events and statistics from his historic year?

The 29-year-old driver had many notable victories during the 2021 season that will make it one to never forget. Larson won his first race with Hendrick Motorsports at Las Vegas Motor Speedway after leading 103 out of 267 laps.

The next notable victory came at the Coca-Cola 600 when he won his first crown jewel event in NASCAR and swept all four stages en route to his first of three straight wins. That victory also broke the record for the most wins by a single organization in Cup Series history.

In between that three-race winning streak, Larson won his second All-Star race and became the first driver to win the event at two different race tracks. It was the second straight win for him in the All-Star race and second in the last three years.

Larson’s final win on that three-race winning streak came at Nashville Superspeedway, which was the Cup Series’ first race in Nashville since the 1984 season. It was a race that brought an incredible amount of hype in NASCAR’s return. 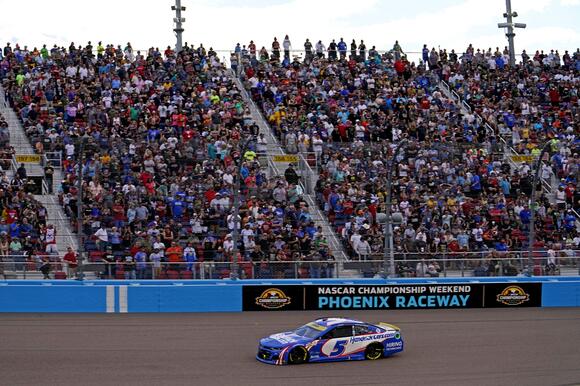 The first win of his playoffs came at the Bristol Motor Speedway night race, which should be counted as the crown jewel event in the Cup Series moving forward. It was Larson’s first win at his favorite track on the schedule.

One of the most hard-fought race wins came at the Charlotte ROVAL when Larson’s car started to suffer voltage issues. The pit crew fixed the car and came from the back to clinch the victory and a spot into the Round of 8.

Larson continued his success while winning at Kansas Speedway which was the 17 year anniversary of Hendrick Motorsports’ plane crash. He won the race in the No. 5 car and the paint scheme Ricky Hendrick drove. Ironically, Hendrick’s only win in NASCAR came at Kansas.

Not a single driver had won three straight races on two separate occasions since 1987 when Dale Earnhardt, Sr. accomplished this feat. However, Larson solidified his name next to Earnhardt when he won at Kansas.

Finally, Larson capped off the year with his 10th victory of the season and first career Cup Series championship at Phoenix Raceway after a blazing fast final pit stop that saw him jump from fourth place to first place.

Due to Larson’s 10 wins, he became only the second driver in the last 23 years to have double-digit victories in a single season. Jimmie Johnson was the last driver to win 10 races in 2007.

He also tied Tony Stewart for the most wins in a playoff system since NASCAR went away from the full-season format. Both drivers ended their respective playoffs with five victories.

It is very unprecedented for a driver to perform at this type of level in the Cup Series, but Larson put together an incredible year with many emotional victories along the way. 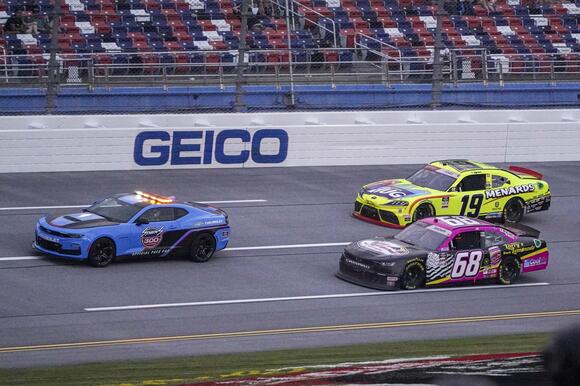 Kyle Larson broke many records during his 2021 season that seem incredible when you think of where he was last year. There wasn’t much more he could accomplish when the checkered flag waved at Phoenix Raceway.

The first record Larson broke is the number of wins at road courses in a single season. The 29-year-old became the first driver to win at three road courses (Sonoma, Watkins Glen, Charlotte ROVAL) which cemented his title as the King of Road Courses.

There’s not a single driver who has led more laps in a 36-race season after Larson broke the record set by Jeff Gordon in 2001 at Kansas Speedway. The 29-year-old driver didn’t just break the record, he shattered it.

Larson led 2,581 laps over the entire season while Gordon led 2,320 laps. What’s even more impressive is the percentage of laps led and the number of total laps driven over the season.

Larson led 261 more laps than Gordon despite completing 1,638 fewer laps than him. It’s incredible because the driver of the No. 5 Chevrolet led 6.9% more total laps than Gordon’s dominant year. 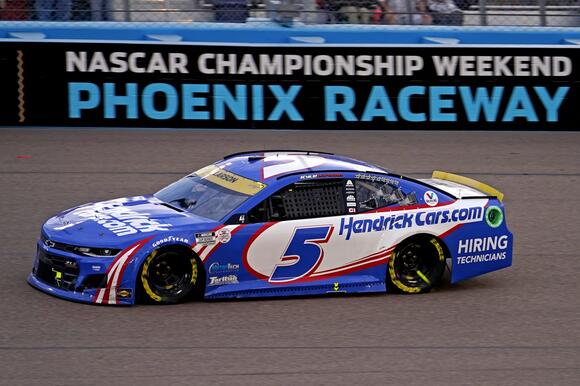 Another record that Larson broke is the number of laps led on mile-and-a-half tracks in a single season. He led 1,317 laps on these types of race tracks which is the most ever across a season.

To put this in perspective, Larson led 1,317 laps on 1.5-mile tracks while the rest of the competition led 1,337 laps combined. At the end of the season, Larson led 49.6% of laps at mile-and-a-half tracks.

Larson also led the most laps during a playoff-type format since NASCAR went away from the full season format starting in 2004. He led 1,015 laps during a 10-race span which averages out to 101.5 laps led per race.

Finally, he finished the season with 83 playoff points, which is the most by any driver since the stage system was introduced in 2017. The previous high was Martin Truex, Jr. with 69 playoff points in its inaugural season.

What is next for Kyle Larson?

There are still some things left to accomplish for Larson in the NASCAR Cup Series after his first season with Hendrick Motorsports. Larson put together a season for the ages and one that every driver dreams of having in their career.

Some of these accomplishments include winning the Daytona 500, the Southern 500, the dirt race at Bristol, a Martinsville clock, and a superspeedway victory in general. There are also some events that could be added in the future.

At only 29 years old, Larson could see 10 or more years left in the Cup Series. Maybe, he decides to leave before his prime to pursue a World of Outlaws championship .

However, there is no end in sight for his dominance in NASCAR. Larson could break even more records and put himself in rare air with multiple championships in the Cup Series. Many drivers have won a single title but not many have won more.

Whatever he decides to do moving forward, there will be two sides watching him succeed. The world of dirt racing and the world of NASCAR get to see a generational talent try to become the greatest driver in the history of racing across the United States.

It may seem like a tall task but he has plenty of time to knock down more personal goals. That’s also the scary thing for drivers across the country as they watch him tear the field apart in any car he attempts to drive.

This is only the beginning for Kyle Larson.

Kyle Larson on NASCAR Next Gen car: "I'm ready to race it"

Larson, who won the 2021 season finale at Phoenix – and his first NASCAR Cup Series championship – not quite three months ago, led the way in average lap speed (131.728 mph) on Tuesday, the first day of a scheduled two-day test of the Next Gen car at the track.
MOTORSPORTS・2 DAYS AGO
NBC Sports

Reigning Cup champion Kyle Larson said the Next Gen car felt similar Tuesday to the previous car, just that “everything was a little more exaggerated with (the Next Gen) car.”. Larson spoke after the first day of a two-day organizational test at Phoenix Raceway — the final test before...
PHOENIX, AZ・1 DAY AGO
FOX Sports

Kyle Larson 'did not enjoy not racing,' ready for season to begin

Kyle Larson took a long break — for him — from racing during the offseason. He spent six weeks out of a race car. The Hendrick Motorsports driver had a chance to relish his 2021 NASCAR Cup Series title. He had a chance to go to Dubai, spending some time in the Formula 1 garage as well as riding a camel. He was able to relax and be with his family.
MOTORSPORTS・12 HOURS AGO