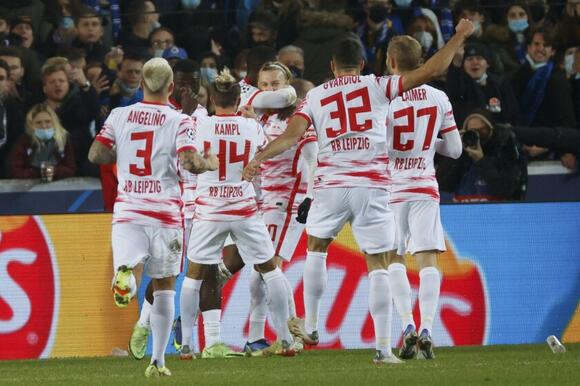 Defender Willi Orban, forwards Yussuf Poulsen and Hugo Novoa, and goalkeeping coach Frederik Gößling all tested positive for COVID-19 after returning from Belgium, while defender Mohamed Simakan and a member of the backroom staff were infected despite not traveling, Leipzig said.

Leipzig coach Jesse Marsch, goalkeeper Péter Gulácsi and another member of the coaching staff tested positive at the beginning of the week. Leipzig said they remain in quarantine.

The club carried out tests on 61 staff members on Thursday. It said it remains in regular contact with the local health authority and will continue to carry out tests on a regular basis.

Leipzig is based in the east German state of Saxony, which is on the front line of the latest wave of infections hitting the country. Infection rates are the highest and vaccination rates the lowest in Saxony compared to other regions. Local authorities have responded by banning crowds from sports events in the state.

Leipzig’s game against Bayer Leverkusen on Sunday will be the Bundesliga’s first without fans in months. Leipzig’s Champions League game against Manchester City next month will also be affected.

Leipzig previously said all of its players and staff members were either fully vaccinated or have recently recovered from COVID-19.

Szilveszter Csollany dead at 51: Anti-vax Olympic rings champ dies from Covid after agreeing to have jab to keep working

AN Olympic gold medallist and vaccine sceptic has died from Covid aged 51 - just weeks after agreeing to get jabbed to keep his coaching job. Hungarian Szilveszter Csollany, a gymnastic rings hero, took the vaccine shortly before he became ill, so had not built up enough antibodies for full protection.
PUBLIC HEALTH・18 HOURS AGO
San Diego Union-Tribune

US downhill racer Johnson forced out of Beijing Olympics

CORTINA D’AMPEZZO, Italy (AP) — The United States team for next month’s Olympics lost one of its top medal prospects Tuesday when downhill racer Breezy Johnson said injury will force her to miss the Beijing Games. Johnson placed second behind Olympic champion Sofia Goggia in each of...
SPORTS・1 DAY AGO
The Independent

Everton’s Alex Iwobi was sent off just seven minutes after coming on as Nigeria crashed out of the Africa Cup of Nations following a 1-0 defeat to Tunisia in the round of 16.Iwobi was dismissed after his yellow card for a challenge on Youssef Msakni was upgraded to red after a VAR check in the 64th minute.The three-time AFCON winners were already trailing to Msakni’s strike from distance two minutes after the restart, with the ball squirming through Maduka Okoye’s grasp.There was no way back for them with Tunisia advancing to a quarter-final date with Burkina Faso.FULL-TIME! ⏰ #TeamNigeria 0️⃣-1️⃣...
SOCCER・2 DAYS AGO

It was the first time an outfield player started as a goalkeeper at a major international tournament, and he fared quite well.
FIFA・1 DAY AGO
The Independent

What the papers sayThe Daily Mail says Newcastle are chasing the signature of Brighton midfielder Yves Bissouma. It is believed Brighton would part ways with the 25-year-old Mali international for £50m, which would shatter Newcastle’s club-record transfer fee by £10m.Liverpool defender Joe Gomez is reportedly on the radar of Steven Gerrard and Aston Villa. According to The Sun, the 24-year-old England international centre-back is thought to have been on Gerrard’s wishlist for a while, with a possible January move on the cards.The London Evening Standard reports Arsenal are considering a move for Real Sociedad forward Alexander Isak, as their hopes...
PREMIER LEAGUE・1 DAY AGO
San Diego Union-Tribune

Christian Eriksen has further stepped up his recovery from his cardiac arrest by training with former club Ajax.Eriksen, who has been linked with a return to the Premier League with Brentford revealed earlier this month that he “died for five minutes” when he collapsed during the Euro 2020 group match against Finland in June.The 29-year-old received life-saving treatment on the pitch before being taken to hospital and was fitted with an implantable cardioverter defibrillator (ICD) device.He left Inter Milan by mutual consent before Christmas after rules in Italy prevented him from playing with an ICD and has been training with...
PREMIER LEAGUE・19 HOURS AGO

The number of positive coronavirus tests in the Premier League has fallen to its lowest total since the start of December.There were 16 new positive cases recorded in the latest round of testing from 17 to 23 January, with 6,221 Covid-19 tests administered on players and club staff.Only two positive Covid-19 tests were actually recorded between 21 and 23 January from the 2,090 tests conducted.A Premier League statement read: “This is the fourth week in a row the number of positive results has decreased and the lowest number of positives in a week since 5 December.“The safety of everyone remains...
PREMIER LEAGUE・1 DAY AGO
The Guardian

Kevin De Bruyne has insisted the title race is not over and is determined to make sure Manchester City maintain their intensity.Premier League leaders City dropped points for the first time since October on Saturday as they were held to a 1-1 draw at SouthamptonThe result ended the champions’ run of 12 successive victories and allowed second-placed Liverpool who have game in hand and a trip to the Etihad Stadium to come, to cut their advantage to nine points.De Bruyne told City TV: “Obviously the schedule in December is a lot of games following each and we managed to...
PREMIER LEAGUE・21 HOURS AGO

Manchester United kept up the pressure on Women’s Super League leaders Arsenal with an impressive 3-0 win against Tottenham.Vilde Boe Risa volleyed the hosts into the lead after 38 minutes before Hayley Ladd netted a second ahead of the interval.Leah Galton added her side’s third in the second half as United recorded their sixth victory in as many matches to move above Chelsea and one point behind Arsenal who face Manchester City in Sunday’s late kick-off.United were able to take advantage of Chelsea’s goalless draw at Brighton.Erin Cuthbert came the closest to scoring for the Blues when her second-half strike...
SOCCER・2 DAYS AGO
The Independent

Substitute Tobin Heath scored an injury-time equaliser as Women’s Super League leaders Arsenal snatched a 1-1 draw at Manchester City Heath drilled home in the second of six added minutes to ensure the visitors avoided a second straight defeat in the league following their shock loss to Birmingham a fortnight ago.Khadija Shaw had given City the lead in controversial circumstances after 65 minutes, the Jamaican international tapping home from close range from Lauren Hemp’s low cross.Arsenal were furious that play had been allowed to continue when the ball deflected off the referee in the build-up to the goal, but their...
WORLD・2 DAYS AGO
The Independent

Hakim Ziyech lived up to his wizard nickname with a spellbinding strike to sink Tottenham 2-0 at Stamford Bridge in a pivotal Premier League win for Chelsea.Thiago Silva headed home Mason Mount’s free-kick to cement Chelsea’s third victory over their London rivals this month, after wins in both legs of the Carabao Cup semi-final.Wily Brazil defender Silva had earlier done just enough after a push from Harry Kane to earn a foul that denied the England captain the game’s opening goal.360 minutes of football.8⃣ scored.0⃣ conceded. Cheers. 🥂#CheTot pic.twitter.com/mUUGK835R0— Chelsea FC (@ChelseaFC) January 23, 2022Kane tapped past Kepa Arrizabalaga after...
PREMIER LEAGUE・2 DAYS AGO
The Independent

In a pivotal week, Premier League clubs are looking to push through deals as the transfer window shuts.Tottenham look keen to make moves with Antonio Conte not hiding his dissatisfaction as the club’s inability to strengthen yet, with Dele Alli and Giovani lo Celso both likely to be pushed out the door after being left out of the squad for the 2-0 defeat to Chelsea. While Arsenal are also in the market for a striker, with Fiorentina’s Dusan Vlahovic top of their list, though Juventus may move should it emerge that the Viola cannot hold on to the Serbian forward...
PREMIER LEAGUE・1 DAY AGO

Frustration for Arsenal with 0-0 draw against Burnley in EPL

Watford have appointed Roy Hodgson to his eighth managerial job in English football.The 74-year-old, already the oldest manager in Premier League history during his time with Crystal Palace has now managed 17 clubs and four national teams in a coaching career spanning 47 years and eight countries.Here, the PA news agency looks at his record in his homeland.Bristol City, 1982After beginning his managerial career in Sweden with Halmstad, Hodgson’s first job in England was a brief and unsuccessful spell at Bristol City, winning only three out of 21 games in just under four months in charge. City were relegated...
PREMIER LEAGUE・14 HOURS AGO
The Independent

A week on from the sacking of Rafael Benitez and Everton’s situation appears to have got worse rather than better.Fan favourite Duncan Ferguson suffered defeat at the start of his second spell as caretaker manager with supporters now openly protesting against the administration for what they perceive is a lack of clear strategy or ambition.At least half-a-dozen names – some from left-field like Fabio Cannavaro – have been thrown into the hat to become Everton’s seventh permanent manager in six years with no apparent associated pattern or philosophy, while the club’s downward spiral into a relegation battle continues.Here the PA...
PREMIER LEAGUE・1 DAY AGO
The Independent

What the papers sayTottenham’s Dele Alli is being watched closely by a number of Premier League teams, according to the Daily Mail. Brighton are reportedly joining Newcastle Burnley and Everton in the chase to sign the 25-year-old midfielder. And the Daily Echo adds that Southampton have expressed an interest too.The Mail also reports Newcastle have made an offer of roughly £30million for Lyon midfielder Bruno Guimaraes. The 24-year-old has been targeted by Arsenal and Juventus, but is yet to see offers from those clubs. The Magpies’ offer would make him their second-most expensive signing if successful.Tottenham have had a...
PREMIER LEAGUE・2 HOURS AGO