Bruce Arians: Antonio Brown Ruled Out in Buccaneers vs. Colts 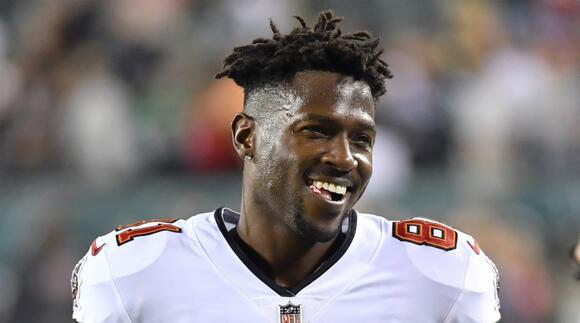 The receiver is the only Tampa Bay player officially ruled out for Sunday.

Antonio Brown is the only Tampa Bay player who is officially ruled out against the Colts on Sunday, coach Bruce Arians told reporters during Friday's press conference.

The wide receiver has not played since against the Eagles in Week 6, when he tallied six catches for 93 yards with a touchdown. The six-time Pro Bowler, who has been dealing with a lingering ankle injury, has recorded 29 receptions for 418 yards and four touchdowns in five games this season.

Per ESPN's Adam Schefter , doctors expected it would be a six-week injury. This Sunday marks the fifth game and sixth week he's been ruled out.

Brown has been in hot waters recently after a report that a former live-in chef for the wide receiver accused him of obtaining a fake COVID-19 vaccination card. The chef, Steven Ruiz, shared text message conversations he had with Brown's girlfriend, Cydney Moreau, with the Tampa Bay Times .

It is not clear whether Brown submitted a fake vaccination card to Tampa Bay; however, the franchise released a statement , saying, "After an extensive educational process conducted throughout our organization this past offseason highlighting the benefits of the COVID-19 vaccines, we received completed vaccination cards from all Tampa Bay Buccaneers players and submitted the required information to the NFL through the established process in accordance with league policy.

"All vaccination cards were reviewed by Buccaneers personnel and no irregularities were found."

Per ESPN's Jenna Laine , the latest updated on the league's investigation is that they reached out to Ruiz this week.

For more coverage of the Buccaneers, visit All Bucs .

The Baltimore Ravens ended their 2021 season on a six-game losing streak and now turn their attention to the 2022 offseason. They will have many opportunities to improve their roster over the coming months, as they have a few big needs that need to be taken care of. One position...
NFL・2 DAYS AGO
Insider

NFL star Antonio Brown said his team tried to pay him to go to a mental health facility after he left the team during a game.
NFL・2 DAYS AGO
Sportsnaut

Super Bowl 2022: The Tampa Bay Buccaneers are the reigning NFL champions, but who'll make the playoffs — and lift the Lombardi Trophy at the end of this season?
NFL・2 DAYS AGO
USA TODAY

Rob Gronkowski said he could easily change his mind in the coming weeks on whether to return for a 12th NFL season or retire again.
NFL・2 DAYS AGO

'There's no reason I'm in this position at this point,' the former Tampa Bay receiver said.
NFL・2 DAYS AGO
Sports Illustrated

Brown's lawyer said on "Real Sports with Bryant Gumbel" that they're weighing a defamation lawsuit for saying Brown had a mental health episode.
NFL・2 DAYS AGO
Sportsnaut

The Jacksonville Jaguars’ search for their organization’s ninth head coach may soon be coming to an end. Longtime fans of
NFL・2 DAYS AGO
Insider

With just two games left before Super Bowl LVI, there's still plenty to bet on this weekend, from first touchdown scorer to a slew of prop bets.
NFL・2 DAYS AGO

Antonio Brown appeared on HBO’s “Real Sports” Tuesday to clear the air about his departure from the Tampa Bay Buccaneers, including whether he has beef with Tom Brady.
NFL・2 DAYS AGO
CBS Sports

Antonio Brown calls out Buccaneers' loyalty, says he has never had a mental health diagnosis

Antonio Brown isn't ready to give up his battle with the Tampa Bay Buccaneers, weeks after being released by the team after exiting in the middle of a game against the Jets. Brown and the Buccaneers each have their side of the story, with Brown saying he couldn't play due to an lingering ankle injury while Buccaneers head coach Bruce Arians said Brown was upset over his lack of targets at halftime.
NFL・1 DAY AGO
WKSS KISS 95-7

Gronk: I'd Retire If I Had 'To Decide Right Now'

The broadcaster was asked about the Buccaneers quarterback’s future during a “CBS Mornings” appearance.
NFL・5 HOURS AGO
105.3 The Fan

Yes, Sean Payton will be the next Cowboys HC

I’ve got the latest on the Sean Payton to Dallas rumors and when they’ll likely come to fruition. Plus the future of Amari Cooper, Tyron Smith, Dan Quinn, La’el Collins and more with this team.
NFL・2 DAYS AGO
The Spun

Jerry Jones is sticking with Mike McCarthy for 2022 – but that doesn’t necessarily mean he’s not still infatuated with Sean Payton. There’s plenty of speculation Jones will try and hire Payton in 2023. The former Saints head coach said earlier this week he’s going to take a year off from coaching. He may even get into the sports television business. But he’s expected to return to coaching in 2023.
NFL・10 HOURS AGO
The Spun

The Chicago Bears have reportedly found their next head coach in the form of Indianapolis Colts defensive coordinator Matt Eberflus. ESPN’s Adam Schefter first reported the news on Thursday morning, revealing that Eberflus beat out Jim Caldwell and Dan Quinn to land the job. Eberflus will get his first...
NFL・1 DAY AGO
The Spun

Shortly after two head coaching vacancies were filled on Thursday morning, it was reported that Dan Quinn will return to the Dallas Cowboys for the 2022 season. Quinn was considered a popular coaching candidate for this year’s cycle because of the success he had as the Cowboys’ defensive coordinator. Some fans were a bit surprised that he would return to Dallas for another year.
NFL・1 DAY AGO
The Spun

Late Tuesday night, a report emerged suggesting Aaron Rodgers and Davante Adams “would love” to team up on one NFL team. According to a report from NFL insider Jordan Schultz, Rodgers and Adams are looking into taking their talents to Denver to play for the Broncos. That, of course, would have to be approved by the Packers.
NFL・2 DAYS AGO
Sports Illustrated

The Rams quarterback and Buccaneers defensive tackle were rather heated during Sunday’s playoff game.
NFL・2 DAYS AGO
Sportsnaut