2022 Grammy Awards delayed over omicron surge. What that means for these Kentucky nominees

But both will have to wait a little bit longer than expected to pick up any possible hardware. The Recording Academy and CBS announced that the 64th Grammy Awards will be postponed from its original date in late January due to the rise in cases of the omicron variant of the COVID-19 virus.

"Given the uncertainty surrounding the Omicron variant, holding the show on Jan. 31 simply contains too many risks. We look forward to celebrating Music's Biggest Night on a future date, which will be announced soon," according to a statement from the Grammy Awards.

The annual awards show had been scheduled to be held Jan. 31 at the Crypto.com Arena , formerly known as Staples Center in Los Angeles with the awards broadcast live on CBS. 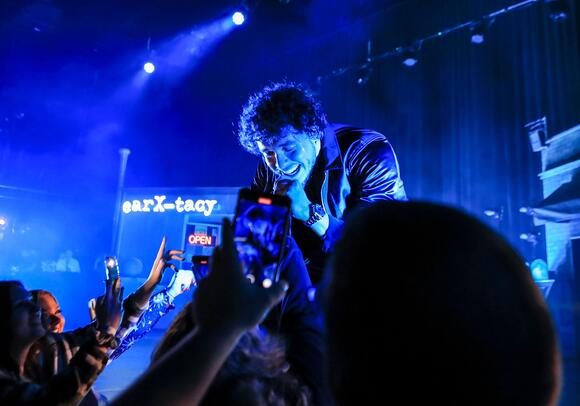 Also up for a couple of Grammy Awards is Atherton High School graduate Harlow. The Louisville native, who recently performed at five sold-out concerts in Louisville and had been announced as a headliner for the 2022 Forecastle Festival , received two 2022 Grammy nominations. The rapper was also nominated last year.

This year Harlow is nominated in the Best Melodic Rap Performance category for his feature on pop star Lil Nas X's single "Industry Baby." Lil Nas X's album "Montero" is also up for Album of the Year, which gives Harlow another nomination as a featured artist and songwriter.

"Industry Baby," which was released in July, debuted at No. 2 on the Billboard Hot 100 and became Harlow's first number one song in October.

You may like: Here's the complete lineup of performers for the 2022 Forecastle music festival

This article originally appeared on Louisville Courier Journal: 2022 Grammy Awards delayed over omicron surge. What that means for these Kentucky nominees

The Recording Academy and CBS announced Wednesday that they are indefinitely postponing the 2022 Grammy Awards due to concerns over the omicron coronavirus variant. The ceremony was previously set for Jan. 31. “The health and safety of those in our music community, the live audience, and the hundreds of people...
CELEBRITIES・13 DAYS AGO
Mega 99.3

Grammy Awards Postponed for Second Year Due to Omicron

For the second year in a row, the Grammy Awards have been postponed from their scheduled date of Jan. 31 due to the ongoing COVID-19 pandemic. A new date has not yet been announced. "After careful consideration and analysis with city and state officials, health and safety experts, the artist...
MUSIC・13 DAYS AGO
HeySoCal

He 64th Grammy Awards ceremony was postponed indefinitely Wednesday, with The Recording Academy and CBS announcing that the surge in COVID-19 infections created “too many risks.”. The show, hosted by Trevor Noah, was originally scheduled for Jan. 31 at Crypto.com Arena in downtown Los Angeles. “After careful consideration and...
LOS ANGELES, CA・13 DAYS AGO
EW.com

Jordan Cashmyer, who appeared in season 5 of the MTV reality series 16 and Pregnant as a young mother who battled homelessness, has died in Maryland, her mother Jessica confirmed on Sunday. She was 26. A cause of death has not been shared. "Last night I received a call no...
MARYLAND STATE・2 DAYS AGO

Horseshoe Tunica Circuit series returns with 17 ring events and $500,00 in guarantees. 18 January 2022 (Tunica, MS) - The World Series of Poker Circuit returns to Horseshoe Tunica Hotel & Casino on Thursday. Horseshoe Tunica, not far over the Mississippi border from Memphis, Tennessee, is one of the longest-running Circuit stops.
MEMPHIS, TN・20 HOURS AGO
HipHopWired

Give It To Me: 5 Reasons Timbaland Is The GOAT Producer

The conversation about who is the best to do it behind the boards is a debate to be had. But our money is on Timbaland as the greatest of all time producer; no cap. When the Hip-Hop community truly does the homework it should be no surprise why Timbo The King is just that—The King. […]
CELEBRITIES・2 DAYS AGO
USA TODAY

Walter Ralph Emery, Country Music Hall of Famer and host of TNN primetime talk show "Nashville Now," died Saturday at the age of 88.
NASHVILLE, TN・2 DAYS AGO
Get Up Mornings with Erica Campbell

Urban One Honors “The Soundtrack of Black America” Live Tonight On TV One & Cleo TV!

Kelly Clarkson wows fans with her most recent look

Ralph McDaniels On The Legacy of Video Music Box, Pt. 2

Check out part 2 of our exclusive interview with Ralph McDaniels, founder of Video Music Box.
MUSIC・1 DAY AGO
The Independent

Netflix could be a dominant force at next month’s NAACP Image Awards.The streaming giant on Tuesday emerged with a leading 52 nominations including the film “The Harder They Fall.” The movie — featuring a large starry cast including Regina King, Jonathan Majors, Idris Elba and LaKeith Stanfield — pulled in 12 nominations, including for best picture. Netflix landed 23 nominations in the television/streaming categories.“The Harder They Fall,” produced by Jay-Z, is based on real Black characters from the Old West who have generally been overlooked in the genre. The story follows Nat Love, a cowboy whose gun-slinging crew face...
MOVIES・8 HOURS AGO

The 2022 NAACP Image Award nominations are in and Jennifer Hudson, H.E.R, and more of our faves lead the pack with the most nominations of the night.
CELEBRITIES・59 MINUTES AGO
GlobalGrind

Did You Know: Estelle Contributed To These Songs & Soundtracks [Gallery]

Artist Estelle has contributed to countless projects in music and film. She celebrates her 42nd birthday today and we want to honor her many achievements in entertainment with a gallery of her wonderful contributions. Read more inside.
MUSIC・8 HOURS AGO
iHeartRadio

Drake is set to make a special appearance in L.A. next month as part of the festivities surrounding Super Bowl weekend. The rapper is set to appear at the h.wood Group’s Homecoming Weekend experience, taking place at the Pacific Design Center in West Hollywood. The two-day event will bring together special guests from sports, fashion, music, and entertainment as they descend into Los Angeles (the h.wood Group’s hometown) for Super Bowl LVI. Produced by Uncommon Entertainment alongside the crypto concierge service, MALÏBU, and shopping site REVOLVE, the invite-only event will feature performances from top artists and DJs, while creating a “VIP” space...
NFL・6 HOURS AGO

The 64th annual Grammy Awards, which had to pull off its original January date in Los Angeles, will now take place Sunday, April 3 at the MGM Grand Garden Arena in Las Vegas. The ceremony, hosted by Trevor Noah, will air live on CBS and Paramount+ at 8 p.m. ET/5 p.m. PT. The new date was revealed Tuesday by the Recording Academy and CBS along with CMT, which as a result of the shift will now move its CMT Music Awards from its originally scheduled April 3 to later in April. This year’s Grammys were set to be held January 31 at...
LOS ANGELES, CA・5 HOURS AGO
Audacy

Listen to the Superstar Power Hour with Sam Hunt

Listen every weekday from 2PM - 3PM on your favorite Audacy Country station as Katie & Company bring you today’s biggest hits with some extra insight from the biggest stars in the genre!
ENTERTAINMENT・1 DAY AGO
Audacy

On Tuesday, January 18, the Recording Academy announced that the 64th Annual GRAMMY Awards would be rescheduled for Sunday, April 3, 2022. The announcement comes after the show was postponed from its initial January 31, 2022 date.
LAS VEGAS, NV・5 HOURS AGO
iHeartRadio

iHeartRadio ICONS with John Mellencamp: How To Watch

John Mellencamp is celebrating his new album 'Strictly A One-Eyed Jack' during his exclusive iHeartRadio ICONS show. Find out how to tune in!
MUSIC・10 HOURS AGO