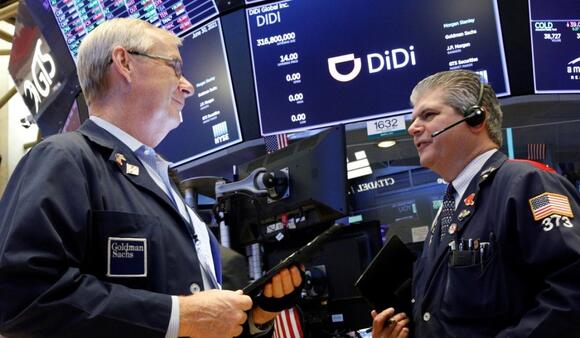 Didi Global (DIDI) - Get DiDi Global Inc. Report shares sank Friday, after a report that Chinese regulators have asked the ride-hailing titan to create a plan to delist from the New York Stock Exchange.

The news came from Bloomberg, which cited knowledgeable sources.

China’s Cyberspace Administration, which oversees data security, is worried about the transmission of sensitive data, the sources said. So it asked the company to set up a plan.

That could involve a privatization or listing on the Hong Kong Stock Exchange followed by a delisting from the NYSE, the sources said.

If privatization happens, shareholders will probably get back at least the $14 initial public offering price, the sources said. Otherwise, there could be major lawsuits or shareholder rebellion against the plan, they said.

A listing in Hong Kong would probably be floated at a discount to the $8.11 share price as of Wednesday’s close, Bloomberg reported. Didi recently traded at $7.70, down 5%.

The move is part of an Ant restructuring ordered by Chinese authorities in April.

The new company will be named Qiantang Credit Reporting. Ant will have a 35% ownership stake, the central bank said, according to The Wall Street Journal.

Zhejiang Tourism Investment Group, which is controlled by the Zhejiang provincial government, also gets 35%. Two Ant executives will have a 10% stake, and the rest goes to Zhejiang-based companies.

Ma, of course, is the founder of e-commerce titan Alibaba BABA.

Our Black Friday sale has started for our Action Alerts PLUS investment club! Get in on the conversation and get the latest investment ideas and trading strategies. Click here and save $150.

U.S. stocks ended mixed Tuesday, with tech names getting hammered, while the Dow Jones Industrial Average rebounded to finish in positive territory. The S&P 500 index finished off 0.8% at 3,941.48. The Dow Industrials rose 0.15% to end at 31,928.62. The Nasdaq composite was slammed after dismal results from Snap (SNAP) - Get Snap, Inc. Class A Report spread gloom to big tech names with heavy advertising exposure. The Nasdaq lost 2.4% to end at 11,264.45.
STOCKS・16 HOURS AGO
TheStreet

Here are five things you must know for Tuesday, May 24:. 1. -- Stock Futures Slide On Renewed Growth Worries. U.S. equity futures slumped lower Tuesday, potentially erasing most of yesterday solid opening-week rally, as investors quickly retreated from risk markets amid concerns over the impact of surging inflation on both consumer demand and global economic growth.
STOCKS・17 HOURS AGO
TheStreet

Intel CEO Believes Chip Shortage is Only at Halfway Point

Intel (INTC) - Get Intel Corporation Report CEO Pat Gelsinger said the chip shortage is starting to improve, but will likely continue for at least another 18 months. The semiconductor industry has been hit hard with shortages stemming from supply chain bottlenecks caused by the global pandemic and recent lockdowns in China. The lack of supply has been widely felt in sectors such as automotive and computer manufacturering.
BUSINESS・1 DAY AGO
TheStreet

Tesla (TSLA) - Get Tesla Inc Report shares edged higher Monday, but pared earlier pre-market gains, following a report that suggested the carmaker will delay the return to full capacity at its Shanghai gigafactory by at least another day. Reuters reported Monday that Tesla won't return to its full daily...
ECONOMY・1 DAY AGO

The FBI also seized financial records and fine art in the October 2021 raids on properties linked to billionaire Oleg Deripaska, per Bloomberg.
WASHINGTON, DC・28 DAYS AGO
The Independent

A top US official in the Pacific has warned that America would have to “respond” if the Solomon Islands allows China to establish a military base there.Following a “constructive and candid” 90-minute meeting with prime minister Manasseh Sogavare, ambassador Daniel Kritenbrink said that the security deals between China and the Solomon Islands present “potential regional security implications” for the US and other allies.“We wanted to outline for our friends in the Solomons what our concerns are,” Mr Kritenbrink, US assistant secretary for East Asian and Pacific Affairs, told reporters.“We have respect for the Solomon Islands’ sovereignty. But we also...
FOREIGN POLICY・28 DAYS AGO
americanmilitarynews.com

Japan says it scrambled fighter jets on Tuesday to respond to the approach of Russian and Chinese warplanes near its airspace, in what Tokyo called a “provocation” as it hosts a meeting of world leaders including Joe Biden.Addressing a virtual press conference, Japanese defence minister Nobuo Kishi said that the move by Beijing and Moscow was likely planned to coincide with Japan’s hosting of the Quad meeting with its allies the US, Australia and India. Tokyo is hosting its first ever informal gathering of Quad nations, which has seen leaders of all four nations — Fumio Kishida, Joe Biden, Anthony...
WORLD・15 HOURS AGO
electrek.co

Elon Musk, the world’s wealthiest man, who thinks tunnels are immune to natural disasters, is purchasing Twitter. The company confirmed on Monday afternoon that it had accepted the billionaire’s offer. “Twitter, Inc. today announced that it has entered into a definitive agreement to be acquired by an entity wholly owned by Elon Musk, for $54.20 per share in cash in a transaction valued at approximately $44 billion,” reads the official press release. “Upon completion of the transaction, Twitter will become a privately held company.”
BUSINESS・29 DAYS AGO
Fortune

Sign up for the Fortune Features email list so you don’t miss our biggest features, exclusive interviews, and investigations. Shanghai’s 25 million residents have endured an extreme COVID lockdown for nearly a month—and now a new nightmarish topic is trending on Weibo, the country’s Twitter-like social media platform.
PUBLIC HEALTH・29 DAYS AGO

Indonesia accounts for about half of the world's supply of palm oil — the world's most widely used vegetable oil.
INDUSTRY・29 DAYS AGO
TheStreet

Nobody knows when a stock (or the stock market) has hit bottom. People can speculate -- and every analyst hoping for a little bit of television fame most certainly will -- but no person, no matter how many past predictions they claim to have gotten right knows when a stock or the market has fallen as low as it will go.
STOCKS・2 DAYS AGO
TheStreet

The United States has experienced an unprecedented housing boom caused largely by the Covid pandemic. Demand for homes in certain markets increased exponentially especially as companies loosened or eliminated rules about where employees had to work from. Clearly, many New Yorkers decided that paying Manhattan (or even Queens or Long...
MANHATTAN, NY・3 DAYS AGO
TheStreet

Tesla (TSLA) - Get Tesla Inc Report for example has raised a total of $20.2 billion in funding over 36 rounds, according to Crunchbase. Musk has become adept at garnering foreign investment dollars in recent years. Most of the funding the nearly $700 billion company has received recently has come from China.
AEROSPACE & DEFENSE・1 DAY AGO
TheStreet

Oh, Snap! How Much Further Can the Stock Slide? The Chart Hints.

Snap (SNAP) - Get Snap, Inc. Class A Report stock is getting buried on Tuesday, down 42% at last check. Bad earnings result? No. A crash in the Snapchat platform? Negative. Instead, Snap provided a worse-than-expected intra-quarter update on its business. The company warned that revenue and adjusted Ebitda would...
STOCKS・10 HOURS AGO
TheStreet

The dollar is on a roll, thanks to the surge in U.S. interest rates, a strong U.S. economy and the war in Ukraine. The rise in rates helps the greenback because they make dollar-denominated fixed-income instruments more attractive. As for the economy, it has grown faster than many of its counterparts overseas, attracting foreign investors.
STOCKS・7 HOURS AGO
TheStreet