Chelsea’s attacking brilliance without a striker could delay Lukaku return 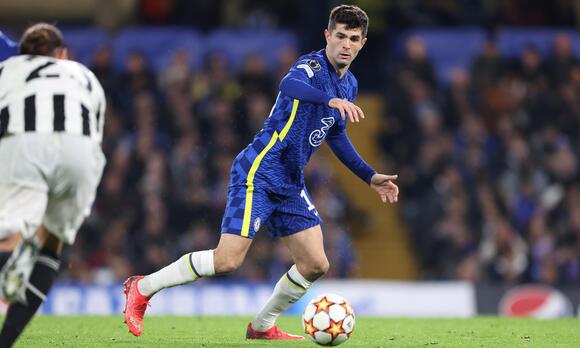 Thomas Tuchel was in his element when Chelsea smashed Juventus 4-0 on Tuesday. Forced to improvise after losing Kai Havertz to a hamstring injury, Tuchel seized the chance to think outside the box, his tactical mind whirring as he looked at his options in attack and decided that the best way to hurt Matthijs de Ligt and Leonardo Bonucci was essentially to give them nobody to mark.

It was a night for the little guys. There was an unfamiliar central role for Christian Pulisic, who made up for his lack of impact in possession by contributing in other areas, his energy off the ball a feature of Chelsea’s high press. There was a fine playmaking display from the slender Hakim Ziyech and on the left there was maturity and skill from Callum Hudson-Odoi, who made it 3-0 when he finished off a flowing move in the 58th minute.

This, it seemed, was Tuchelball in all its glory, the tempo relentless, the movement bewildering, the threats coming from all angles as the blue wave overwhelmed Juventus. Strikers? Who needs them? Chelsea were fine without one against Juventus, just as they were when they demolished Leicester last weekend, and the quality of their football in the past week means that Tuchel does not have to shift gear against Manchester United on Sunday, even though Romelu Lukaku is available again and no doubt desperate to play against his old team.

The Lukaku issue is a fascinating one for Tuchel to solve. The striker’s recovery from the ankle injury he sustained against Malmö on 20 October is welcome, but he is not returning as a saviour. Lukaku, who is 28, was an unused substitute against Juventus and, given that Chelsea have responded to his injury by rattling in 23 goals in seven and a half games, Tuchel is under no pressure to start him against Unitedtomorrow.

There is no need to rush. Havertz is fit, Pulisic could start again, Mason Mount could return and Timo Werner scored after coming on against Juventus. Whichever way you spin it, the league leaders are in a luxurious position. The goals are flying in from every angle, with defenders stepping forward and the wing-backs playing more like No 10s.

The reliance on a No 9 is minimal. Reece James, the right wing-back, is Chelsea’s top scorer with five goals and Marcos Alonso will be an able deputy on the left for Ben Chilwell, who must wait six weeks before finding out whether he needs surgery after sustaining anterior cruciate ligament damage against Juventus.

Chilwell has been a key part of Chelsea’s versatile attacking. In total there have been 16 goals from defenders and, for the time being, the challenge for Lukaku simply has to be proving that he deserves to be the main man up front.

It has not been easy for the striker since his £97.5m move from Internazionale, although Tuchel is not panicking yet. He accepted that signing Lukaku would make Chelsea’s attack less mobile. Tuchel wanted more variety after winning the Champions League in counterpunching style last season and Lukaku, who had fired Inter to the Serie A title, seemed the perfect fit.

He arrived as the final piece in the jigsaw and scored four goals in his first four games. Since then, however, the doubts have grown. Lukaku had not scored in six games before facing Malmö and Chelsea had become a slightly static attacking force, the fluidity returning only once they were back to playing without a traditional target man.

There was more unpredictability with Havertz leading the line. The German’s height makes him a useful recipient of crosses, but he is also comfortable dropping deep and he is a better presser than Lukaku, who wants the ball to feet, to assert himself by pinning his marker before spinning or bringing others into play.

Chelsea are yet to tap into those strengths. Yet Tuchel is not worried. He loves Lukaku’s leadership and he can point out that Chelsea missed the 28-year-old’s ruthlessness when they chucked away two points against Burnley this month.

Perhaps patience is required. Lukaku can relax. He can bide his time before showing United that they were wrong to sell him.

Romelu Lukaku to return to Chelsea squad after talks with Tuchel

Romelu Lukaku is in line to return to Chelsea’s squad after holding productive talks with Thomas Tuchel over the striker’s controversial interview. Tuchel is expected to restore Lukaku to his side when Chelsea host Tottenham in the first leg of their Carabao Cup semi-final on Wednesday after the £97.5m forward expressed regret over going public with his unhappiness about life at Stamford Bridge.
PREMIER LEAGUE・14 DAYS AGO
The Guardian

Pep Guardiola has insisted that Manchester City have not been 'luckier' than other Premier League clubs with Covid-19, despite Thomas Tuchel’s belief that it has been a deciding factor in the title race.Ahead of Chelsea's visit to the Etihad for Saturday's lunchtime kick-off, Tuchel said that "the biggest difference" between his side and City is that the defending champions have "dealt better with injuries and the Covid situation"."Maybe it is lucky, maybe they do it better, but they have fewer injuries to key players, fewer days out and weeks where they miss them. They did not suffer from Covid like...
PREMIER LEAGUE・2 DAYS AGO
Tribal Football

Chelsea boss Thomas Tuchel was openly critical of Romelu Lukaku after defeat at Manchester City. Tuchel pulled no punches in his assessment of Lukaku's performance at Manchester City, insisting the player can do “much, much better" as he lamented Chelsea's costly lack of cutting edge in general. “Sometimes he...
PREMIER LEAGUE・2 DAYS AGO
goal.com

The Blues are still trying to bring the best out of the £98 million signing, but they will not be tinkering with their tactical approach. Romelu Lukaku has been struggling to justify his £98 million ($134m) price tag at Chelsea, with questions being asked of how he fits into the Blues’ system, but Thomas Tuchel says he will not be changing his ways for anyone.
PREMIER LEAGUE・1 DAY AGO

A look at what’s happening in European soccer on Tuesday:. Chelsea plays away at Brighton with club-record signing Romelu Lukaku struggling for fluency in front of goal. The striker has only five goals in 14 Premier League matches since rejoining Chelsea. Chelsea manager Thomas Tuchel said: “He’s a key player, so there will always be pressure but not more pressure than he puts on himself.” Lukaku failed to find the net on Saturday when a 1-0 loss to Manchester City saw Chelsea slip 13 points behind the leader and drop to third place this weekend. Chelsea is the only current Premier League club that Brighton has yet to beat since promotion in 2017. Brighton drew at Stamford Bridge 1-1 at the end of December and is in ninth place. The Burnley-Watford match was postponed for a second time, this time because Burnley didn't have 13 available outfield players.
PREMIER LEAGUE・12 HOURS AGO
The Guardian

It takes a brave person to drop Mason Mount. Frank Lampard once said that Mount’s eyes would burn whenever he left him out and Thomas Tuchel saw something similar when he named the Chelsea midfielder on the bench against Manchester City on Saturday. “It’s within Mason’s character of being polite and respectful, so there is no harm,” Tuchel said. “But I get the eyes. I get the look. I know the look.”
PREMIER LEAGUE・10 HOURS AGO
ESPN

Chelsea boss Thomas Tuchel said Romelu Lukaku, who signed for a club record last summer, must do more for the team and criticised the forward's performance in Saturday's 1-0 Premier League defeat against Manchester City. Lukaku, who has scored just five league goals since returning to Stamford Bridge from Inter...
PREMIER LEAGUE・2 DAYS AGO
The Independent

Chelsea completed a sweep of the Fifa Best coaching awards as Thomas Tuchel and Emma Hayes won the respective prizes for men’s and women’s coach of the year. The Blues reached the finals of both the men’s and women’s Champions League last season, with the men’s side defeating Manchester City to lift the European Cup for the second time - less than five months after Tuchel was appointed manager. The women’s team were defeated by Barcelona in their first appearance in the Women’s Champions League final but won a domestic treble, sealed by winning the FA Cup with victory over...
PREMIER LEAGUE・13 HOURS AGO

Activists mourn deaths in Amazon state of Pará as bodies of José Gomes, Márcia Nunes Lisboa and their daughter found by son
PUBLIC SAFETY・5 DAYS AGO
The Guardian

The princess and the Caravaggio: bitter dispute rages over Roman villa

‘It’s like a museum,’ says princess caught in inheritance feud over one of the world’s most expensive homes
WORLD・3 DAYS AGO
The Guardian

The Colston Four’s acquittal gives me hope that Britain’s legacy is being recognised, says author Thomas Harding
SOCIETY・6 DAYS AGO
The Guardian

Republican party signals plans to withdraw from US presidential debates

Church must change its position on same-sex marriage

Thank you for your editorial (12 January) which highlighted the nonsensical state of the Church of England’s position on church weddings for LGBTQI+ individuals. As a gay, civilly partnered cleric, I would also like to thank you for drawing attention to the fact that I am prohibited by law from marrying my partner of 22 years – even in a civil ceremony – if I wish to continue ministering in the church I love, and had to give assurances that our relationship was wholly celibate before I was first ordained, three short years ago.
RELIGION・1 DAY AGO
The Guardian