What to know about new COVID-19 variant omicron 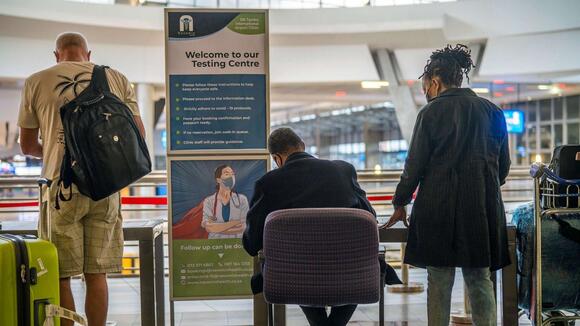 On Monday, the WHO said the overall global risk is assessed as "very high" due to the variant's mutations although there are still many unknowns.

The WHO urged countries to step up monitoring and surveillance. The global health agency said it's still not clear whether the variant is more transmissible or causes more serious illness, or if it affects vaccines. Such studies will take time.

The first confirmed case in the U.S. was identified in California on Wednesday in a vaccinated individual, but the person's symptoms were mild, the U.S. Centers for Disease Control and Prevention said. The person had traveled to South Africa in late November.

"As all of you know -- because we've been discussing this -- we knew that it was just a matter of time before the first case of omicron would be detected in the United States," Dr. Anthony Fauci, the White House's chief medical adviser, said Wednesday.

As of Wednesday, there were more than 370 confirmed cases in nearly 30 countries across the globe, with most in South Africa but seven cases in Canada and a few dozen in the U.K.

"We don't know very much about this yet," Dr. Maria Van Kerkhove, the WHO's COVID-19 technical lead, said Nov. 25. But concern about this variant stems from its "large number of mutations," Kerkhove added, which could "have an impact on how the virus behaves."

Concerns about this variant already have prompted several countries, including the U.S., to impose travel restrictions from countries in southern Africa. The WHO is urging calm, saying it's premature to close borders.

There are thousands of COVID-19 variants, with new ones emerging all the time. Usually new variants disappear quickly because they're overrun by a more dominant strain.

The now-dominant delta variant is so highly transmissible that most of the new variants that have cropped up in recent months have been unable to gain a foothold. In the United States, the delta variant comprises an estimated 99.9% of all new cases.

MORE: Why are coronavirus cases and hospitalizations on the rise in the US?

"There's obviously this tension between crying wolf and exacerbating concerns about the variants, but also being caught flat-footed and not responding swiftly enough," said Dr. John Brownstein, chief innovation office at Boston Children's Hospital and an ABC News contributor. "This is where we have to cautiously respond without inciting panic, because this could easily turn out to be a variant similar to others that have never really panned out to be global concerns."

Scientists across the globe constantly monitor all newly emerged variants to see if they're spreading in a meaningful way and global health authorities have said they're monitoring this new variant closely.

Current COVID-19 vaccines, which rely on genetic technology, could be easily updated to better combat emerging variants -- though so far that hasn't been necessary.

Pfizer/BioNtech said that if a "vaccine-escape variant emerges," it expects "to be able to develop and produce a tailor-made vaccine against that variant in approximately 100 days, subject to regulatory approval."

Nine variants are currently being monitored by the WHO, which designates particularly worrisome strains as variants of "interest" or "concern." When they no longer pose a significant public health threat, the variants are reclassified -- so far during the pandemic, 13 have been removed from the WHO's list.

But public health experts said the emergence of variants underscores the urgent need to vaccinate everyone on the planet.

"It gives us a lens into why as epidemiologists we've been so concerned about global vaccine equity," Brownstein added. "It's a recognition that with not enough people around the globe immunized, it creates more opportunities for variants to emerge, and this is a very good example of that."

An average of over 500,000 new COVID-19 cases in the U.S. are reported every day, The New York Times reported on Jan. 5. The surge is primarily fueled by the omicron variant of the COVID-19 virus. How many vaccinated people have died from the omicron variant?. Article continues below advertisement.
PUBLIC HEALTH・12 DAYS AGO
Fortune

Never miss a story: Follow your favorite topics and authors to get a personalized email with the journalism that matters most to you. As COVID-19 infections continue to escalate in the new year, some patients have been reporting a strange new symptom: night sweats. Commonly associated with other conditions like...
PUBLIC HEALTH・14 DAYS AGO
foodcontessa.com

Dr. Fauci Said the U.S. May Propose Terminating Covid Isolation if a Person Has Tested Negative for the Virus After Five Days

According to Dr. Anthony Fauci, a leading infectious disease specialist in the United States, the US is contemplating proposing that people who have been exposed to Covid stop being isolated after five days if they have tested negative for the virus. The change might come after the Centers for Disease...
U.S. POLITICS・14 DAYS AGO
Daily Voice

COVID-19: One Omicron Symptom Can Show Up On Your Skin

A sign that you may have become infected with the COVID-19 Omicron variant may show up on your skin. A ZOE study conducted in the United Kingdom analyzed thousands of reports of Omicron symptoms uploaded to an app by the British public. The top five symptoms recorded were:. Runny nose,
SKIN CARE・15 DAYS AGO

Will this COVID-19 wave lead to herd immunity? Are you less likely to get sick again if you had omicron? Why this ‘milder’ variant is a double-edged sword

Epidemiologists are weighing the significance of the latest omicron wave, and wondering how — if at all — it could change the course of the pandemic.
PUBLIC HEALTH・2 DAYS AGO
FOX 5 San Diego

Every infection provides a chance for the virus to mutate, and omicron has an edge over its predecessors: It spreads way faster despite emerging on a planet with a stronger patchwork of immunity from vaccines and prior illness.
SAN DIEGO, CA・2 DAYS AGO
GMA

The recent wave of COVID-19 includes a rise in cases among kids.
CHICAGO, IL・2 DAYS AGO
WEKU

When it was discovered, omicron alarmed scientists. The variant looked wildly different from earlier versions of the coronavirus — and it quickly became clear that these mutations gave omicron an uncanny ability to sidestep our vaccines and spread very rapidly. But it has taken longer to untangle what, if...
SCIENCE・11 DAYS AGO

Dr Maria Bottazzi says their vaccine, called Corbevax, is unique because they do not intend to patent it
PUBLIC HEALTH・2 DAYS AGO
WTOP

The Centers for Disease Control and Prevention on Wednesday endorsed COVID-19 booster shots for kids 12 to 15 years old. Boosters now are approved for everyone 16 and up, and a Maryland pediatrician wants to emphasize how dramatically boosters can improve protection. “Many of our teenagers were vaccinated over the...
MARYLAND STATE・12 DAYS AGO
healththoroughfare.com

Omicron – Is the New COVID-19 Variant Signaling the End of the Pandemic?

Could this finally be some good news on the whole pandemic situation?. According to scientists, there are some clear signs out there that the omicron variant might just be the end of COVID-19! More precisely, they point out that the omicron wave may have already peaked in the UK and...
SCIENCE・3 DAYS AGO
The Independent

The continued drop in UK Covid cases indicates the Omicron wave may well be “turning around”, a leading expert advising the Government has said.Prof Mike Tildesley, from the University of Warwick and a member of the Scientific Pandemic Influenza Modelling group (Spi-M), said that the latest case figures were “cautiously good news” and he hoped the country may have a “flu-type” relationship with the virus by the end of the year.The latest data shows a 38% drop over the last seven days across the UK in the numbers testing positive for Covid-19, with 70,924 new cases reported on Sunday.Prof Tildesley...
PUBLIC HEALTH・16 HOURS AGO

Preparing for the ‘endemic’ stage of COVID-19: What this looks like

There's growing talk in the medical community that the COVID-19 pandemic may soon be entering the "endemic" phase.
SAN FRANCISCO, CA・34 MINUTES AGO
d1softballnews.com

Omicron 2, the sub-variant that scares Great Britain: first 53 cases, another 20 in Israel. “It could be more violent”

There Great Britain returns to under 100 thousand cases per day for the first time since 21 December, so much so that in London we return to talk about goodbye to the Green pass. However, to launch a first alarm on a sub-variant of Omicron is the United Kingdom’s Health Security Agency which on Friday warned that it had traced 53 sequences of a sub-lineage of Omicron, called BA.2, which has been talked about since December, explaining that it will be monitored carefully. Because the first 53 cases come after that already Israel had detected 20 during the genetic sequencing of Covid patients. “This variant contains more mutations than Omicron and – according to the Business Standard – could be more violent.” Although scientists are concerned about the new sub-variant – the British tabloid reads – little is known about the dangers it entails.
WORLD・3 DAYS AGO
ScienceAlert

Researchers have discovered a protective gene variant that seems to shield people from severe cases of COVID-19, and the finding could lead to new breakthroughs in fighting the coronavirus. Since much earlier in the pandemic, scientists have been busily investigating how patient genetics influence the severity of a SARS-CoV-2 infection,...
SCIENCE・21 HOURS AGO
The US Sun

How long does coronavirus last in your system?

CORONAVIRUS continues to spread across the US, with more than 189,700 confirmed cases nationwide. The deadly virus is highly infectious due to its incubation period as well as how easily it is transmitted. ⚠️ Read our coronavirus live blog for the latest news & updates. Here is what you...
PUBLIC HEALTH・21 DAYS AGO

A NEW set of Covid symptoms has taken over the traditional signs as the most common, a leading study has revealed. The most reported symptoms come from Brits who have been struck with the bug in recent days, as Omicron is now the most prominent variant in circulation. The ZOE...
PUBLIC HEALTH・10 DAYS AGO
MarketWatch

The Centers for Disease Control and Prevention is maintaining its position on its new COVID-19 isolation policy, telling people who had symptoms and who have access to a test to be sure to use an antigen test in slightly updated guidance. The CDC put into place a new policy last...
PUBLIC HEALTH・12 DAYS AGO
8 News Now

If you test positive on an at-home test, do you need to report it?

The short answer is it's complicated.
PUBLIC HEALTH・1 DAY AGO