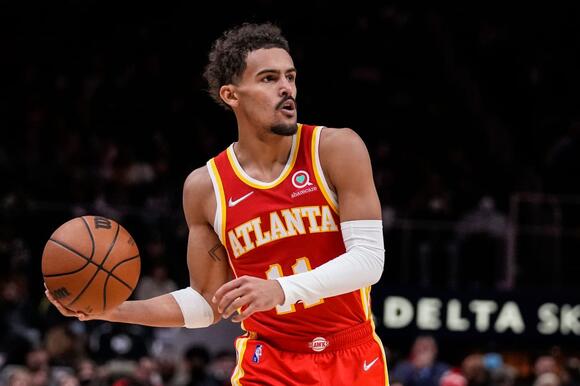 The Atlanta Hawks point guard is dishing out meals this Thanksgiving.

The only thing more prolific than Trae Young's offense is his track record of philanthropy and activism . Thanksgiving and the winter holidays can be joyous or painful times, depending on your current circumstances. That sad reality isn't lost on the Atlanta Hawks point guard.

Another one. The Trae Young Family Foundation is keeping over 500 local families fed this weekend. The family-run organization never misses an opportunity to give back to those who need it most.

In the summer of 2020, Young and his family donated $4 million for a multi-sport facility in Norman, which became known as 'The Young Family Center.' The gift was the largest donation in city history.

Cutting large checks is one thing, but intentionally sacrificing your bottom-line (and popularity) for social causes is another issue. Over the past year, Young has led the charge on vaccination campaigns, the clemency of Julius Jones , and been a vocal supporter of the Black Lives Matter movement.

The NBA is celebrating its 75th season. It's a league built on activism, truth-telling, and sacrifice. There is no other player in the league who embodies those principles better than Trae Young. The prodigy point guard is well on his way to an All-Star selection and other prestigious league awards. Still, the 23-year-old's most significant accomplishments are happening off the hardwood.

How to watch, listen, and bet on the game.
NBA・1 DAY AGO
All Hawks

The Hawks cannot afford to lose again to the Knicks.
NBA・20 HOURS AGO
All Hawks

The Hawks traded the 22-year-old to the Knicks.
NBA・2 DAYS AGO

How to watch, stream, listen, bet on the game in Atlanta.
NBA・20 HOURS AGO
All Hawks

The Hawks have now lost four games in a row.
NBA・1 DAY AGO
All Hawks

After 2.5 seasons, the Hawks gave up on Reddish.
NBA・2 DAYS AGO