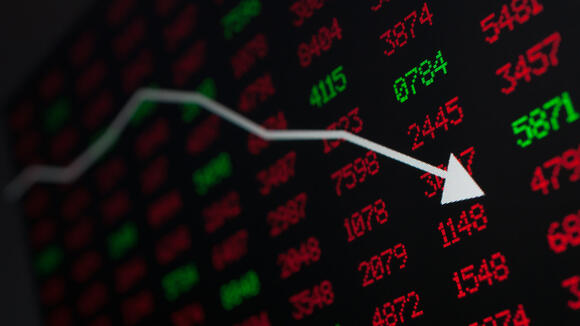 Global markets are tumbling today following news of a new COVID variant named B.1.1.529. This new variant has been discovered in South Africa — with other incidental cases having been confirmed in Belgium and elsewhere — and the World Health Organization (WHO) has made a statement on the matter.

Dr. Maria Van Kerkhove, COVID-19 technical lead at the WHO, said scientists will convene today to discuss the new variant, according to a tweet.

See: How To Budget For the Holidays in the Year of COVID-19
Find: Pfizer Raises Earnings Forecast After CDC Approves Its COVID-19 Vaccine for Kids Ages 5-11

CNBC reported losses of 1.8% for the S&P 500 and 2.5% for the Dow Jones Industrial Average shortly after the U.S. stock market opened for a holiday-shortened trading session on Friday, Nov. 26. Crude futures slid 10% to under $70 a barrel, putting the global energy benchmark on track for its biggest one-day loss since July, amid concerns that potential limits on movement could reduce demand for transportation fuels. Bitcoin skidded 8% to rest at just over $54,000.

Concerns about renewed travel restrictions and lockdowns, which in turn could further affect supply chain disruptions, are affecting the markets. Already, the U.K., Israel and Singapore have restricted travel from southern Africa, according to the Wall Street Journal (WSJ).

Craig Erlam — senior market analyst, UK & EMEA, OANDA — told GOBankingRates that “it’s obviously early days but the current bout of inflation is largely being driven by supply shortages and bottlenecks which will surely worsen in the event of more lockdowns and restrictions across the globe. It will be a massive concern for central banks as it will increase the probability of inflation becoming more permanent, despite being driven again by temporary factors.”

The most worrying thing about the new strain at the moment is how little we know about it, with early indications being that it could be more problematic than Delta, Erlam said. “We’re seeing a typical flight to safety in the markets with equities, commodity currencies and oil getting whacked and traditional safe havens like bonds, gold and the yen getting plenty of love.”

The EU Commission said it “will propose, in close coordination with Member States, to activate the emergency brake to stop air travel from the southern African region due to the variant of concern B.1.1.529,” according to a tweet from Ursula von der Leyen, president of that body.

The announcements hit airline share prices, including those of Delta Air Lines, United Airlines and American Airlines Group, which dropped 7% or more ahead of the opening bell. Cruise stocks, including Royal Caribbean Group took a beating too, according to the WSJ.

Also hit by the news are bank shares, and Bank of America, Goldman Sachs and Citigroup were each down more than 4%, CNBC reports.

On the other hand, investors rushed into stocks representing vaccine manufacturers. Moderna shares gained more than 8%, while Pfizer shares added 5%, per CNBC.

“I’m going to operate under the assumption that this is more transmissible, and that leads me to narrow my focus,” Greg Branch, managing partner at Veritas Financial Group, told CNBC, pointing to energy as an area that investors would avoid due to a potential drop-off in demand if the variant causes another wave of COVID .

Social Security payments for next year are going to be a little larger than this year's -- a total of 5.9% more, thanks to the largest cost-of-living adjustment increase in almost four decades....
BUSINESS・4 HOURS AGO
GOBankingRates

Social Security: How To Boost Your Benefit by $800

The average retiree collects around $1,500 in Social Security benefits per month. This can range up or down depending on lifetime earnings, and importantly, when you decide to start taking...
BUSINESS・3 HOURS AGO
GOBankingRates

Older members of Gen Z have recently entered the workforce or will be entering the workforce for the first time, and what they look for in a job may not be the same as previous generations. According...
BEAUTY & FASHION・4 HOURS AGO
MarketWatch

Gold prices end lower on Tuesday for a third straight session, on the back of rising Treasury yields to highs not seen since 2020 and strength in the dollar.
MARKETS・22 HOURS AGO

The EV upstart has fallen out of favor among more value-focused investors.
STOCKS・17 HOURS AGO
MarketWatch

Geopolitical risks, such as fears of a Russian invasion of Ukraine, give greater notion to idea of a 50 basis point rate hike in March, says MCAP trader Michael Franzese.
BUSINESS・22 HOURS AGO
MarketWatch

Why Lemonade Stock Is Falling Today

Despite the broad, sharp selloffs in the Big 3 stock market indexes, market internals suggest there is no panic in the selling, and there may even be signs that investors are looking to buy on the dip. The NYSE Arms Index, a volume-weighted breadth measure that tends to rise above 1.000 during market selloffs and fall below 1.000 during rallies, is actually down to 0.843, while the Nasdaq Arms is down to 0.715. Many Wall Street technicians suggest Arms readings of 2.000 and above indicate panic-like selling behavior, while readings below 0.500 indicate panic buying. Currently, number of declining stocks is outnumbering advances by a 5.2-to-1 margin on the NYSE and by a 4.7-to-1 margin on the Nasdaq, while share volume in declining stocks is outnumbering up volume by a smaller 4.4-to-1 on the Big Board and by 3.3-to-1 on the Nasdaq. Meanwhile, the Dow Jones Industrial Average is falling 502 points, or 1.4%, the S&P 500 is down 1.7% and the Nasdaq Composite is shedding 2.2%.
STOCKS・22 HOURS AGO
MarketWatch

The yield on the 10-year Treasury note surged Tuesday as U.S. investors returned from a three-day holiday.
MARKETS・20 HOURS AGO
The Motley Fool

Why Asana Stock Is Plummeting Today

Even after volatile swings, the stock is still up roughly 55% over the past year.
STOCKS・21 HOURS AGO
MarketWatch

Oil prices have surged, but here’s why one fund manager warns they’ve gone too far

Are you sure energy is a safe haven? Here's why one fund manager is pessimistic on oil prices.
ENERGY INDUSTRY・3 HOURS AGO
mpamag.com

Record levels of demand in Toronto last year continued to deplete an already constrained supply of listings, pushing up the average selling price to an all-time high, according to the Toronto Regional Real Estate Board. A new record high of 121,712 sales took place in the province for the whole...
REAL ESTATE・9 HOURS AGO
The Motley Fool

Find out why the market was on a downward trajectory Tuesday morning.
STOCKS・1 DAY AGO
MarketWatch

Gold futures on Wednesday head higher, as the precious metal attempted to finish in positive territory for the first time in four sessions.
BUSINESS・2 HOURS AGO
CBS News

South Africa is over Omicron, and their good news may be a harbinger of hope for the U.S.

Johannesburg — Only eight weeks after the world first heard about the Omicron variant of the coronavirus, when researchers in South Africa who discovered the strain notified global authorities, that country's wave of infections has fallen as sharply as it climbed. Not only that, but South Africa has weathered its fourth wave of COVID-19 with very little interruption to people's lives.
PUBLIC HEALTH・1 DAY AGO
MarketWatch

Why Analysts Are Hiking Targets on These Trillion-Dollar Tech Names

Although markets turned lower Tuesday, this did not stop analysts from hiking their targets on a couple of trillion-dollar tech stocks.
STOCKS・1 DAY AGO