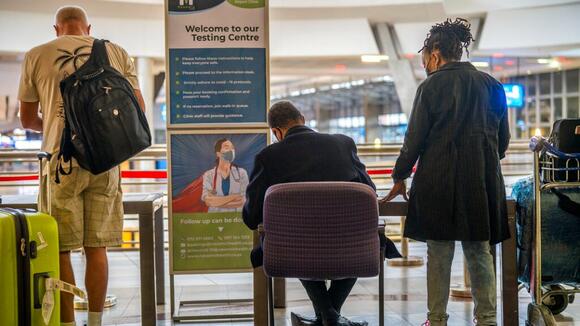 Countries around the world are racing to ban travel from southern Africa after health officials identified a new COVID-19 variant that they warn may be vaccine-resistant.

The head of the European Commission announced Friday that the governing body will propose banning travel from the southern African region to its member states due to uncertainty over the new variant.

The new variant, called B.1.1529, was identified earlier this week and announced by scientists on Thursday. Officials say it has a larger number of mutations than previous strains.

It is unclear how effective the coronavirus vaccines will be against the variant.

It was first detected in South Africa but has since been reported in Israel, Hong Kong, Botswana and Belgium, according to The New York Times.

Israel quickly moved to ban travel to and from all regions in Africa besides northern Africa after the case was discovered, The Jerusalem Post reported.

Sajid Javid, the British health secretary, said flights from six African countries will be banned due to the new variant.

The U.K. Health Security Agency "is investigating a new variant" and "taking precautions now" while acknowledging that more data is needed.

At least 10 countries, including Italy and France, have banned travel amid concerns of the new variant, according to The New York Times.

The government of South Africa released a statement against the U.K.’s flight bans, saying the decision was “rushed.”

“Whilst South Africa respects the right of all countries to take the necessary precautionary measures to protect their citizens, the UK’s decision to temporarily ban South Africans from entering the UK seems to have been rushed as even the World Health Organisation is yet to advise on the next steps,” the statement said.

The World Health Organization (WHO) will hold a special meeting to discuss the new variant and the next steps it will recommend for countries.

Rwanda is the safest country in Africa - for solo travellers

HONG KONG (AP) — Hong Kong International Airport said Friday that it would ban passengers from over 150 countries and territories from transiting in the city for a month, as it sought to stem the transmission of the highly contagious omicron variant of the coronavirus. Passengers who have stayed...
TRAFFIC・12 DAYS AGO
TravelPulse

The continent of Africa continues to draw more and more visitors as tourism accelerates to the region. Prior to the pandemic, it was one of the fastest-growing regions. In the age of COVID, the continent continues to draw in visitors with wide-ranging tourism options, exceptional diversity and an abundance of yet-to-be-discovered destinations.
TRAVEL・11 DAYS AGO
travelagewest.com

On Nov. 24, 2021, South African scientists announced their discovery of the Omicron variant of COVID-19. Within days, travel bans to South Africa and other Southern African countries were imposed by scores of nations (including the U.S., on Nov. 29). Criticized by the United Nations and the World Health Organization, the travel restrictions were gradually lifted by mid-December, and the U.S. followed suit on Dec. 31.
TRAVEL・7 DAYS AGO

A French government minister has said the country will relax its entry conditions, which have banned most travellers from the UK since mid-December, from Friday (January 14). Jean-Baptiste Lemoyne, minister delegate for tourism, tweeted on Thursday morning that a decree will be published on Friday (January 14) “with immediate entry into force”.
TRAVEL・13 DAYS AGO
The Independent

Covid testing for travellers has ‘outlived its usefulness’ as measures scrapped

Double-vaccinated travellers will no longer need to take a coronavirus test when arriving in the UK as the policy has “outlived its usefulness”, the Transport Secretary has said.Grant Shapps said post-arrival lateral flow tests will no longer be required as restrictions were “firmly placed in the past”.He told the Commons the move would help the aviation industry to “take back to the skies”.Mr Shapps told MPs that the definition of fully vaccinated as “two doses of an approved vaccination or one dose of a Janssen vaccine” would remain for now.But that the rules for those who did not count as...
PUBLIC HEALTH・2 DAYS AGO
US News and World Report

It is widely known that COVID-19 poses a higher threat to immunocompromised people – and Africa, which accounts for almost two-thirds of the global total of new HIV infections, holds especially vulnerable populations, forcing the continent to combat two public health emergencies at once. Although the African continent’s HIV...
PUBLIC HEALTH・12 DAYS AGO
mycbs4.com

WEST PALM BEACH, Fla. (WPEC) — As omicron cases fall across some parts of the United States, international health officials are now warning about a new variant. "BA.2" is a sub-variant of omicron and has been labeled “variant under investigation" by health officials in the United Kingdom who say they are now monitoring the newest strain.
WEST PALM BEACH, FL・2 DAYS AGO

A sub-variant of the omicron strain of the COVID-19 virus appears to be on the rise in at least 40 countries, according to the World Health Organization. The “stealth” omicron variant, as some scientists are calling it, can be difficult to identify because it lacks a genetic characteristic that scientists use to identify the original omicron variant.
WORLD・2 DAYS AGO
travelingformiles.com

Disney+ to launch in 42 new countries, branching out into Africa and the Middle East

South Africa, Turkey, the United Arab Emirates, Turkey, Israel and the Palestine territories are some of the 42 countries that US streaming giant Disney+ will be available in this summer across Europe, the Middle East and Africa (EMEA). The service launched in the US in November 2019. As of the...
TV & VIDEOS・9 HOURS AGO

COPENHAGEN, Jan 26 (Reuters) - The BA.2 subvariant of the Omicron coronavirus variant, which is dominant in Denmark, appears more contagious than the more common BA.1 sub-lineage, Danish Health Minister Magnus Heunicke said on Wednesday in a national address. "There is no evidence that the BA.2 variant causes more disease,...
PUBLIC HEALTH・26 MINUTES AGO
Fortune

Doctor predicts half the world will have omicron within a month, but WHO warns it’s ‘dangerous’ to assume it’s the end of the pandemic

Never miss a story: Follow your favorite topics and authors to get a personalized email with the journalism that matters most to you. The relentless global surge of the Omicron coronavirus variant may infect half of the world’s population by March 2022, according to a prominent scientist writing in a major medical journal.
PUBLIC HEALTH・1 DAY AGO
SKIFT

Last year wasn't the runaway success the travel industry anticipated — or needed. As we close the books on 2021, the Skift Recovery Index stands at 64 points. This indicates that demand for travel, which we gather from a range of data indicators capturing the entire traveler journey from exploration to post-stay, continues to be suppressed and in December sat at 64 percent of 2019 levels.
TRAVEL・8 DAYS AGO
CBS Miami

MIAMI (CBSMiami) — International health officials are now monitoring a new subvariant of Omicron. The UK Health Security Agency has declared BA.2 a “variant under investigation.” The World Health Organization has reported cases of BA.2 in at least 40 countries, including the United States. The subvariant, which has been dubbed “stealth Omicron,” was reportedly first identified in India and South Africa in late December 2021. Dr. Vipin M. Vashishtha reports BA.2 “has 28 unique mutations.” What do we know about BA.2-sub-lineage of Omicron? Is BA.2 different? BA.2 shares 32 mutations w/ BA.1, but it also has 28 unique mutations. Some diff in S1. E is the same, N & M are diff in 1 mutation between the two variants.And…quite a difference when we go to ORF1ab. 1/ https://t.co/qMjHUsV4J4 pic.twitter.com/sn0TB8avx3 — Vipin M. Vashishtha (@vipintukur) January 19, 2022 Because of the constituent growth across multiple countries, Vashishtha believes “BA.2 may be some degree more transmissible than BA.1.” While Vashishtha said this subvariant may replace BA.1, he believes it’s unlikely to cause a second wave of Omicron. Denmark’s Statens Serum Institut noted that “initial analysis shows no differences in hospitalizations for BA.2 compared to BA.1.”
WORLD・1 DAY AGO
San Diego Union-Tribune

Denmark ends most virus restrictions, as Sweden extends them

Denmark's government says it will scrap most pandemic restrictions next week, even as neighboring Sweden has extended its own measures for another fortnight
PUBLIC HEALTH・43 MINUTES AGO
Washington Times

VP Harris to travel to Honduras as migrant caravans from that country headed for U.S.

The head of the World Health Organization is warning that conditions remain ideal for more coronavirus variants to emerge and says it's dangerous to assume omicron is the last one or that “we are in the endgame,” while saying the acute phase of the pandemic could still end this year — if some key targets are met.
PUBLIC HEALTH・2 DAYS AGO