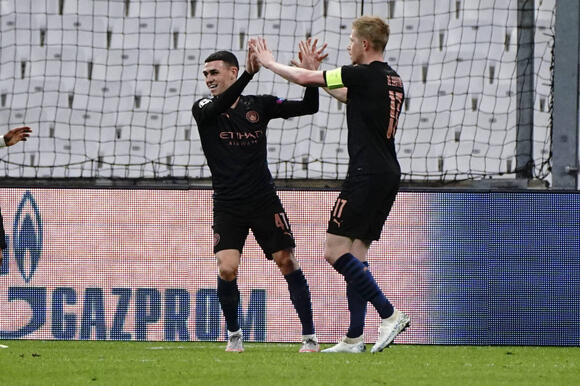 Pep Guardiola was without Phil Foden, Kevin De Bruyne, and record summer signing Jack Grealish for Wednesday's emphatic win over PSG in the Champions League, as City secured qualification for the knockout stages with a 2-1 victory.

The Sky Blues came from behind in midweek, after Kylian Mbappe fired the visitors into the lead shortly after half-time.

Goals from Raheem Sterling and Gabriel Jesus helped City to a third win over PSG this year, as Guardiola's side were confirmed winners of their Champions League group for a 5th successive season.

Despite the victory over PSG, the absence of three key players from City's squad will likely be of major concern to Guardiola, given the hectic schedule facing the Premier League champions between now and the new year.

The Blues face David Moyes' inform West Ham on Sunday, with the Hammers having already inflicted defeat on City once this season in the Carabao Cup.

Ahead of this weekend's top-four clash, Manchester City manager, Pep Guardiola has provided an update on the fitness of his squad, as he suggested when fans can expect to see Foden and Grealish.

Regarding the English pair, Guardiola said

On the situation regarding Kevin De Bruyne, Guardiola said:

"A little bit tired, no taste. Symptoms you have. Six or seven days, a few more days later we will do a PCR test - if he is Covid-19 negative, he will be back."

Guardiola's men can extend their advantage at the top of the league with a win over the west Londoners at the Etihad Stadium on Saturday, a week after their FA Cup third-round victory against Swindon Town at the County Ground. Chelsea boss Thomas Tuchel conceded in his pre-match press conference...
PREMIER LEAGUE・2 DAYS AGO
The Independent

The title race is over now, apparently. You know, the one that ended a few weeks ago. Manchester City already looked like being crowned champions for a fourth time in five years before this twelfth consecutive league win. After it, it seems a nailed-on certainty. There is a faint and remote possibility of a challenge from Liverpool, now 14 points back but with two games in hand. This was a meeting of the top two, though, and it only reinforced the theory that there is in fact only a top one.That was demonstrated not so much by the result, a...
PREMIER LEAGUE・2 DAYS AGO
goal.com

In the away section behind one of the goals at The Etihad, silverware glinted now and again in the winter sunshine. The Chelsea fans, ranged across three tiers, resolutely held up replicas of the Champions League trophy many had brought with them from London and brandished them as a reminder of their victory over Manchester City in the final in Porto last May.
PREMIER LEAGUE・2 DAYS AGO
Yardbarker

Manchester City walked away with a deserved 1-0 win over Chelsea at the Etihad Stadium, courtesy of a Kevin De Bruyne belter. The Sky Blues extended their lead to 13 points at the top of the table with yet another dominant display from start to finish. Speaking to the press...
PREMIER LEAGUE・1 DAY AGO
The Independent

Pep Guardiola has insisted that Manchester City have not been 'luckier' than other Premier League clubs with Covid-19, despite Thomas Tuchel’s belief that it has been a deciding factor in the title race.Ahead of Chelsea's visit to the Etihad for Saturday's lunchtime kick-off, Tuchel said that "the biggest difference" between his side and City is that the defending champions have "dealt better with injuries and the Covid situation"."Maybe it is lucky, maybe they do it better, but they have fewer injuries to key players, fewer days out and weeks where they miss them. They did not suffer from Covid like...
PREMIER LEAGUE・2 DAYS AGO

Manchester City and Chelsea meet this afternoon with the hosts looking to extend their lead at the top of the Premier League table to 13 points. Chelsea will be hoping their cup form can inspire their league performances as they look to break a bad run of form, in which the west London side have only managed one win in their last five games. City boss Pep Guardiola will be back on the touchline after missing his side’s FA cup game away at Swindon Town and will be hoping to get one over on his long-time competitor Thomas Tuchel.Follow...
PREMIER LEAGUE・2 DAYS AGO
blackchronicle.com

Manchester City could virtually lock up the 2021-22 Premier League title with 16 matches left to play if the defending champion can beat second-place Chelsea at home on Saturday. Pep Guardiola’s squad has built a 10-point lead over its closest rival thanks to an 11-game league win streak that has...
PREMIER LEAGUE・2 DAYS AGO
BBC

Manchester City manager Pep Guardiola says his side "deserved" their 1-0 win over Chelsea at the Etihad stadium. Watch highlights of the day's Premier League action on Match of the Day on Saturday, 15 January on BBC One and iPlayer at 22:30 GMT.
PREMIER LEAGUE・2 DAYS AGO
San Diego Union-Tribune

The upcoming summer transfer window is expected to be one of significant business for the reigning Premier League champions, as they look to prioritise the signing of a new centre-forward to replace the recently departed and retired Sergio Aguero. However, while a top level striker is expected to be the...
PREMIER LEAGUE・15 HOURS AGO
CityXtra

There are so many facets of football that make Pep Guardiola's Manchester City so great. They are experts in keeping possession, flawless in their build-up play, but it is one of the very basics of football that makes them such a relentless winning machine - their pressing. Telling a footballer...
PREMIER LEAGUE・18 HOURS AGO
CityXtra

In the modern era of Manchester City Football Club, there have been plenty of impressive teams. From Manuel Pellegrini's 2013/14 Premier League title-winning side - who caught top-flight leaders Liverpool in the dying months of the season, to Pep Guardiola's centurions - who made light work of all of their foes that season.
PREMIER LEAGUE・6 HOURS AGO
CityXtra

The league leaders can extend their advantage at the top of the pile with their second win over the west Londoners this season, after Gabriel Jesus' second-half strike sealed a crucial 1-0 win for Pep Guardiola's men at Stamford Bridge in September. Manchester City made their way past Swindon Town...
PREMIER LEAGUE・2 DAYS AGO
CityXtra

Pep Guardiola’s men are seemingly making the race for the coveted Premier League crown a cakewalk, having put together a splendid eleven-game winning streak ahead of their league meeting with Chelsea. Despite tasting defeat to Tottenham Hotspur on the first day of the campaign and failing in their pursuit...
PREMIER LEAGUE・2 DAYS AGO
CityXtra

Off the back of a crucial 1-0 win against the European champions at the Etihad Stadium, Manchester City went 11 points at the top of the table with Liverpool winning 3-0 against Brentford on Sunday. But perhaps more impressively, the Sky Blues extended their winning run to 12 Premier League...
PREMIER LEAGUE・19 HOURS AGO
SkySports

Pep Guardiola recognised the significance of Manchester City’s 1-0 victory over Chelsea but reiterated the Premier League title could not be won in January. Kevin De Bruyne struck his fifth goal against former club Chelsea with 20 minutes remaining at the Etihad to earn champions City a hard-fought victory over the European champions which saw them take another crucial step towards retaining their crown.
PREMIER LEAGUE・2 DAYS AGO
CityXtra

Scoring his fifth Premier League goal in eight matches against Chelsea, Kevin De Bruyne proved to be the difference maker with an absolute belter of a strike in Manchester City's latest win at the Etihad Stadium that took them 13 points clear of the west London side in the league table.
PREMIER LEAGUE・1 DAY AGO