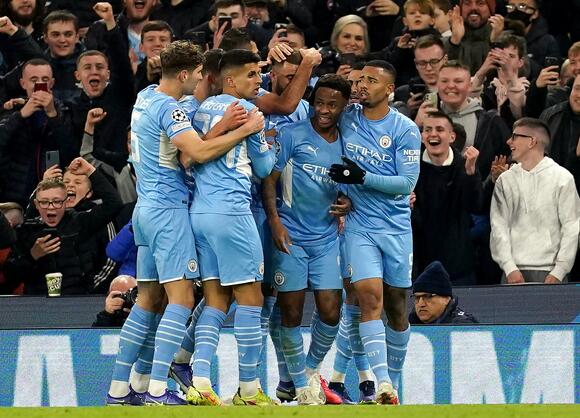 England forward Sterling had an indifferent start to the season after losing his spot as a regular starter towards the end of last term.

That led to speculation over the 26-year-old’s future but circumstances have recently allowed him opportunities and Sterling has taken them.

Sterling has scored in three of City’s last four games, including the vital equaliser in Wednesday’s Champions League victory over Paris Saint-Germain.

Manager Guardiola said at a press conference: “I’m so glad for him, he’s helped us for sure. He will fight to be better and better.

“It is important for strikers and wingers to score and make assists. He was decisive in what we’ve done in recent years.

“Scoring goals can give confidence for these type of guys but he has to do better, be aggressive, go one against one, arrive in the final third. This is the first step for him to come back.”

I'm so glad for him, he's helped us for sure. He will fight to be better and better

The Belgium international, who has been vaccinated, remains in isolation and Guardiola has revealed the player has experienced symptoms.

Guardiola said: “He’s still tired, no taste – the symptoms of Covid. Now he’s done seven or eight days’ isolation. A few more days and we will give him a PCR test and if it’s negative then he will be back.”

Manchester City are "on the brink" of signing highly-rated youngster Zalan Vancsa from MTK Budapest, with an announcement expected in the coming days. That is according to the Telegraph, who claim the 17-year-old will become City's first signing of the winter window if and when a deal is reached between the two clubs. Vancsa has attracted interest across Europe and England after a breakthrough season, and has compared to countryman Ferenc Puskas due to his intelligence, dribbling ability and composure.
PREMIER LEAGUE・1 DAY AGO
ESPN

Manchester City winger Raheem Sterling is set to resume talks with the club over a new contract, sources have told ESPN. No firm date has been set for negotiations to begin, but sources have told ESPN that City are keen to resolve the issue before Sterling enters the final year of his existing deal in June.
PREMIER LEAGUE・22 HOURS AGO
FanSided

It was only recent that Raheem Sterling was struggling to regain his lost place in the Manchester City XI. Perhaps, the month of December was the turning point for the Englishman in a relatively difficult season that he has had to endure under Pep Guardiola. The arrival of Jack Grealish...
PREMIER LEAGUE・1 DAY AGO
The Independent

Sports stars and clubs across the world continue to provide an insight into their lives on social media.Here, the PA news agency looks at some of the best examples from January 26.FootballHarry Maguire hit the course in Dubai Amazing day at the Pro Am for @SlyncDDC. Thanks for looking after me @SlyncIO, the event this weekend will be a special one. 🤩🏌🏻‍♂️ pic.twitter.com/LkWIlU9zkb— Harry Maguire (@HarryMaguire93) January 26, 2022As he and Jordan Pickford teamed up with Lee Westwood.5-a-side team sorted🏙⚽️@HarryMaguire93 @JPickford1 @DPWorldTour @SlyncDDC pic.twitter.com/T9EajDR3Zq— Lee Westwood (@WestwoodLee) January 26, 2022Life’s a beach for Cristiano Ronaldo Proud Dad ❤️🙏🏽 pic.twitter.com/v8gw3KVyqM— Cristiano...
TENNIS・2 DAYS AGO

Mohamed Salah fired seven-times winners Egypt into the Africa Cup of Nations quarter-finals as they edged past Ivory Coast in a dramatic penalty shoot-out after a goalless draw.The Liverpool striker converted the Pharaohs' fifth spot-kick after substitute goalkeeper Gabaski had kept out Eric Bailly's casual effort to secure a 5-4 victory and a last eight showdown with Morocco.Egypt were first to threaten when striker Omar Marmoush rattled the bar with a curling 17th-minute effort, and Ivory Coast keeper Badra Sangare had to tip over Salah's dipping attempt.However, the Elephants responded as the half-time whistle approached when Ibrahim Sangare forced Mohamed...
SOCCER・2 DAYS AGO
The Independent

Anthony Martial’s departure from Manchester United, on loan to Sevilla, has not come as a surprise to many - and certainly not to Rio Ferdinand.The former Monaco forward has been a bit-part player for the Premier League team for some time, featuring just eight times in the Premier League this season and scoring only once in all competitions for the Red Devils.He arrived with a big reputation and price tag and initially excited supporters, but inconsistent showings and being overshadowed by the likes of Marcus Rashford have left him on the fringes of the club, managing fewer than 400 minutes...
PREMIER LEAGUE・2 DAYS AGO
LFCTransferRoom

Premier League clubs must now have a minimum of four positive Covid-19 cases within their squad in order to apply for a fixture postponement, it has been confirmed. It comes after Premier League clubs met on Wednesday to discuss changes to the guidance following widespread confusion and anger surrounding the criteria to call off matches. The rule sees a shift from the previously guidance which allowed clubs to apply for a fixture postponement if they did not have 13 available outfield players and a goalkeeper. Tottenham Hotspur led criticism of the rule after the Premier League accepted Arsenal’s request to...
PREMIER LEAGUE・2 DAYS AGO

Manchester United’s Zidane Iqbal has revealed his pride as he prepares to make his senior international debut.The midfielder, of Pakistani and Iraqi heritage, is poised to make his Iraq bow on Thursday.The 18-year-old flew to join the squad on Sunday and could make his debut when Iraq, the country of his mother’s birth, face Iran in a crucial World Cup qualifier at the Azadi Stadium in Tehran.“It’s another milestone I’m going to hit, my first-team debut for Iraq. I’m looking forward to it and it’s a big game, so hopefully we can win,” he told manutd.com.“Me choosing to play for...
PREMIER LEAGUE・2 DAYS AGO
Insider

FIFA president Gianni Infantino argued that the World Cup should be held biennially, instead of every four years, which has been the norm since 1950.
FIFA・2 DAYS AGO
The Independent

Brentford have launched an investigation after a video of striker Ivan Toney appearing to say “f*** Brentford” was published on social media.Toney is thought to be on holiday in Dubai during the Premier League’s winter break.The 25-year-old has struck six goals in an impressive Premier League campaign so far.But now the Bees are looking into a video posted on Twitter that could land the former Peterborough United player in hot water with his club.“Brentford FC are aware of the video and are investigating,” said a club spokesperson.Brentford boss Thomas Frank accepted an £8,000 fine on Friday, following his red card...
PREMIER LEAGUE・11 HOURS AGO

Liverpool’s latest addition to the coaching staff is one who already holds a big name in the football world - former Brazil goalkeeper and World Cup winner Claudio Taffarel.The 55-year-old joined Jurgen Klopp’s backroom team in November, expanding the goalkeeping section of the coaching crew to three members at senior level.His role encompasses both working with senior and youth stoppers, and as he has now explained, it covers a very different area of the game to the pair already in place at the Kirkby training complex.Unsurprisingly, it’s Taffarel’s role as Brazilian national team goalkeeper coach - which he still holds...
PREMIER LEAGUE・2 DAYS AGO
The Independent

England’s bumpy build-up to the Guinness Six Nations continued apace as Owen Farrell was ruled out of the entire competition through injury with Jonny May looking destined to share the fate of his captain.Jonny Hill has emerged as a doubt for the opener against Scotland on February 5 because of a foot problem, while Eddie Jones is only “hopeful” that Courtney Lawes – the likely replacement for Farrell as skipper – will recover from concussion in time for the trip to Murrayfield.And on a dramatic Tuesday, Joe Marler tested positive for coronavirus just hours before an electrical fire that erupted...
WORLD・2 DAYS AGO
The Independent

Wolves have turned Hwang Hee-chan’s loan from RB Leipzig into a permanent deal.Hwang moved to Molineux in the summer, with Wanderers having the option to buy the South Korea international.The Premier League club have activated that clause in the agreement and the 26-year-old will sign a deal until 2026 at the end of this season.“With every new signing you have to expect a period of settling in and adapting to their new environment, but straight away, Hee Chan has shown exactly what we expected of him as a player, but he’s also settled in quickly and made an impact,” Wolves’...
PREMIER LEAGUE・2 DAYS AGO
The Independent

Newcastle United’s move for Jesse Lingard is on the brink of collapse after Manchester United demanded a loan deal of almost £16 million, which includes a significant clause on whether the St James’ Park side avoid relegation from the Premier League this season. The situation is understood to have left Lingard dismayed as the 29-year-old is desperate for game time that he believes could help him force his way into Gareth Southgate’s World Cup squad by the end of the year.Lingard is said to feel let down by his boyhood club and believes he should be due more respect given...
PREMIER LEAGUE・2 DAYS AGO