Union and Jordan Brand Are Collaborating on the Air Jordan 2 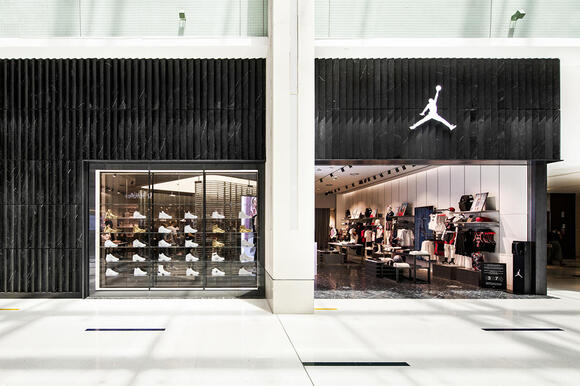 Union’s collaborative versions of Michael Jordan’s signature shoe features a breathable nylon upper that’s coupled with premium suede overlay panels on the midfoot and mudguard. In addition, Union has applied its signature “UN/LA” branding underneath the eyestay along with another tag by the ankle collar revealing that the collab is scheduled to release during this year’s holiday season. The first style will don blue accents on the upper while the latter pair features orange hits. Rounding out the look is a white midsole and a gray rubber outsole.

Union LA and Jordan Brand have been releasing collaborative Air Jordans since 2018 when the two entities released their two vintage-inspired Air Jordan 1 Highs. The brands followed it up with two Union x Air Jordan 4s in the “Guava Ice” and “Off Noir” colorways last year.

While an early look at the Union x Air Jordan 2 collabs was revealed by @zSneakerheadz , release info for the styles hasn’t been announced by either Union LA or Jordan Brand but each pair is expected to come with a $225 price tag.

In related Air Jordan news, the A Ma Maniére x Air Jordan 1 High is set to release on SNKRS and at select Jordan Brand retailers on Dec. 3 for $200.

For the fourth time, Sneaker Room and NBA star Kyrie Irving have teamed up to create a “Mom” collection, but this time, the storytelling is a bit different. For the collection — which features new-look iterations of the Nike Kyrie 7 — Sneaker Room owner Suraj Kaufman and the baller told the story of their late mothers. The new wrinkle to the story, Sneaker Room said, is the want to honor all mothers with the kicks, including Mother Earth. For the two iterations of the Nike Kyrie 7 “Mom” in the collection, Sneaker Room and Irving highlighted nature’s four elements: land, fire, water...
DESIGNERS & COLLECTIONS・4 DAYS AGO
Footwear News

Naomi Osaka brought a good luck charm to the court, and it paid off. The Japanese tennis star hit the court at the 2022 Australian Open on Wednesday. She claimed victory over Madison Brengle, 6-0, 6-4, in the second round of the women’s draw. For the match, Osaka wore a Nike set, including a tank top and tennis skirt with shorts underneath. The matching set was mostly hot pink with touches of indigo, white and aqua blue. She tied her hair up and added a white Nike visor. Osaka slipped into matching tennis shoes for her game. She wore her own Nike...
TENNIS・8 HOURS AGO
Footwear News

Virgil Abloh’s new Nike collaboration with Louis Vuitton is on auction for a cause. As seen in Vuitton’s hip hop-inspired Spring 2022 menswear collection, the late designer collaborated with Nike on an array of Air Jordan sneakers in Vuitton colorways and patterns. In a similar manner, a limited-edition Air Force 1 style—200 pairs of them, to be exact—will be sold at Sotheby’s in a charity auction, beginning Jan. 26. Titled “The Louis Vuitton and Nike ‘Air Force 1’ Collaboration by Virgil Abloh,” each pair of sneakers, available in sizes 5-18, will have a starting bid of $2,000. The low-top style is crafted from...
AEROSPACE & DEFENSE・10 HOURS AGO
hypebeast.com

The Air Jordan 6 has itself a significant year in 2021 in light of its 30th anniversary as it brought back the highly-coveted “Carmine” colorway and even dropped another collaboration with Travis Scott. And it’s self-assured to have another exciting year with the release of more fresh colorways, one being the Air Jordan 6 “Mint Foam” makeup for the ladies.
APPAREL・13 DAYS AGO

Compared to the Air Jordan 1 and 4, the Air Jordan 13 rarely sees as much time in the spotlight. But this year, the silhouette is finally receiving some attention, granted both a “Court Purple” and “Navy” colorway. And the latter, after leaks throughout the past few months, has finally been revealed in detail alongside an April 2nd release date.
UNITED STATES NAVY・13 DAYS AGO
92.7 The Block

The Louis Vuitton x Air Jordan 1 Is Amongst Us

Where To Buy The Air Jordan 4 “Red Thunder”

Easily one of the Jumpman’s most beloved, the Air Jordan 4 is sure to deliver as many exciting releases this year as it did the last. And starting us off is none other than the long-awaited “Red Thunder,” which faced multiple delays throughout the latter half of 2021. Better late than never, the release date is finally just moments away, and it’s surely not too soon to start making preparations for Saturday.
SHOPPING・8 DAYS AGO
hypebeast.com

Jordan Brand is in for quite an exciting Spring season as it has a compelling slew of new sneakers to launch out to the public. Implemented into its strategy is the Air Jordan 4 “Infrared,” and after first surfacing in early December 2021, the kicks have now appeared once again by way of on-foot imagery.
APPAREL・12 DAYS AGO

Teased well before Jordan Brand’s Spring 2022 preview, the Air Jordan 3 “Cardinal Red” is easily among this year’s most anticipated. And it looks like the little ones in your life, too, can get equally excited, as the colorway will also be releasing in kids sizes.
APPAREL・12 DAYS AGO
SneakerFiles

Jordan Brand and Paris Saint-Germain will connect for their fifth signature model, which will be on the PSG x Air Jordan 5 Low and will release in 2022. This Air Jordan 5 Low by PSG will come dressed in a Pumice, Game Royal, Black, and Plum Eclipse color combination. The color theme of the collaboration will match up nicely with their 2022 – 2023 season kits. Currently, other details on this pair are unknown, and sadly, images have yet to leak. However, you can expect the pair to feature co-branding and come with special packaging.
BEAUTY & FASHION・11 DAYS AGO
Hypebae

The 2020 NBA All-Star Weekend contributed to the rise in popularity of the Nike Air Jordan 1 Hi ‘85. Making its return to the sneaker scene, the beloved silhouette arrives in a “Georgetown” colorway. The kicks are predominantly covered in “College Navy,” which is found on the...
BEAUTY & FASHION・13 DAYS AGO
hypebeast.com

Jordan Brand is set to release a new Air Jordan 5 in a “Racer Blue” colorway in line with its Spring 2022 Retro Collection. Announced back in December, the Jumpman will be debuting a total of 15 new modernized installments of Michael Jordan’s classics along with the revival of the Air Jordan 12 “Playoff.” The silhouette was last seen in a low-top variation sporting an “Arctic Pink” colorway which is slated to drop before the current model at hand.
APPAREL・2 DAYS AGO

Valentine’s Day is typically a time where sportswear brands will display their craftiness by making sneaker colorways that align with the holiday for lovers. In 2022, Jordan Brand is chiming in on the action by whipping up a playful women’s Air Jordan 1 Mid “Valentine’s Day” colorway, and it has just emerged onto the scene by way of official images.
APPAREL・14 DAYS AGO
HipHopWired

The recent publication of the memoir from Jordan Brand Chairman and former NBA team president Larry Miller has sparked a buzz and a move towards seeking redemption from the family of the young man he murdered as a teen in 1965. The incident was mentioned, but the man's name wasn't disclosed.
PUBLIC SAFETY・1 DAY AGO
sneakernews.com

Even if you pledge no allegiance to the University of North Carolina (UNC), it’s likely the college’s light blue signature color has infiltrated some of your favorite sneaker models over the last three years. Michael Jordan has helped popularize the aptly-named “University Blue” flair with his NIKE, Inc. family via offerings like a newly-surfaced Air Jordan 1 Mid Crater.
APPAREL・9 DAYS AGO
hypebeast.com

Continuing to deliver takes on the Air Jordan 1 Mid, Jordan Brand has now prepared a “Reverse Bred” colorway for the lowered classic silhouette. Centered around a familiar mix of “Gym Red/Black/White,” the upcoming release is a flip on the storied “Banned Bred” colorway synonymous with Michael Jordan and Jordan Brand.
APPAREL・12 DAYS AGO
sneakernews.com

Among 2022’s best in show, the Air Jordan 4 “Infrared” only adds to the silhouette’s long list of headlines. But unlike the “Canvas” and “Zen Master” releasing the same season, the colorway looks to past releases for inspiration, effectively reimaging the “Green Glow” from a couple years back. And if you, like us, were anticipating the shoe’s February release, I have some bad news: it was recently pushed back to May 12th.
13 DAYS AGO
hypebeast.com

With the Air Jordan 11, Jordan Brand will typically save retro bring backs and high-cut releases for the winter time, but the Spring and Summer seasons are when the Air Jordan 11 Low usually gets its moments to shine. In the coming months, the Beaverton sportswear brand will be shining a light on the lifestyle model by rolling out a “Pure Violet” colorway.
APPAREL・6 DAYS AGO
SneakerFiles

Dropping this Spring, Jordan Brand will launch the Air Jordan 1 Mid ‘Washed Denim’ that will debut exclusively in kids sizing. This Air Jordan 1 Mid comes highlighted with a stone-wash base that also covers the tongue and toe. Next, we have Blue leather on the overlays while White adorns the Swoosh, Wings logo, Jumpman, and midsole. Lastly, a Blue rubber outsole completes the look.
APPAREL・11 DAYS AGO
hypebeast.com

Take an Official Look at the Air Jordan 7 "Afro Beats"

In celebration of the 30th annivesary of the Air Jordan 7 silhouette, Jordan Brand has released a special edition colorway “Afrobeats.”. The Air Jordan 7 “Afrobeats” pays homage to the Afrobeats music genre. Afrobeats is an umbrella term used to describe popular music from West Africa that often combines elements of various styles including fuji music and highlife with American jazz, soul and funk influences. The category of music focuses on intersecting complex rhythms, percussions and vocals for an in-depth multi-instrumental genre. The shoe is constructed in vachetta tan, black, taxi and a dark concord color scheme. The majority of the upper is dressed in a two-toned tan upper and features black and white detailing as well as purple and yellow accents on the midsole. Geometric graphic prints are highlighted throughout the shoe.
DESIGNERS & COLLECTIONS・1 DAY AGO