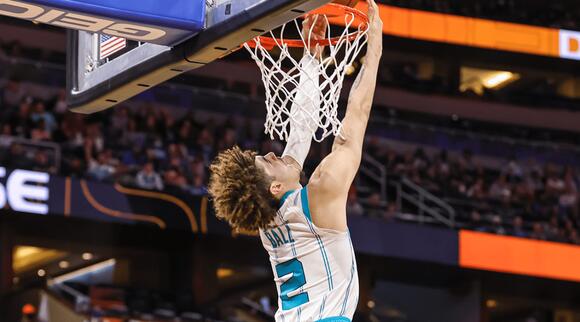 The NBA returns after a one-day hiatus for Thanksgiving and the odds are juicy.

When the NBA SO/UP series was launched, I wanted to make a point of including different teams and making a point to not only pick games involving the Lakers, Warriors, Knicks and so on. That commitment has largely been successful.

Four new teams join the SO/UP mix Friday night, only this set of picks is going to be a little different. Due to the Thanksgiving weekend this preview is going to focus on the teams in broad strokes, how they’re doing and how we think each matchup will go.

SI Betting editor Dave Scipione is back to offer his thoughts on the two games we've targeted for Friday.

The Timberwolves have picked things up in late November, rattling off a five-game winning streak on the backs of big scoring nights from Karl Anthony-Towns, D’Angelo Russell and Anthony Edwards. That stretch included a 43-point shellacking of the Grizzlies. Minnesota ranks in the bottom half of the league in scoring (107.4 PPG) and has the No. 8 scoring defense (104.8 PPG). The T-Wolves’ Against The Spread (ATS) record is identical to their record (9-9) and because of their strong defense and below the pack offense, the vast majority (over 70%) of their games stay under.

The Hornets are playing great basketball. Winners of seven of their last eight, and against quality opponents, Charlotte has a playoff spot in the East if the season ended today. You can’t talk about the Hornets without mentioning LaMelo Ball or Miles Bridges, the team’s young stars, but Gordon Hayward, Kelly Oubre and Terry Rozier are all a big part of Charlotte's success. That being said, the Hornets have room to improve defensively. They allow the third-most points (112.4 PPG) in the NBA, and they make up for it with the league’s fourth-highest scoring offense (111.9 PPG). Charlotte also owns an 11-9 ATS record this season.

I like the Hornets to win at home, where they’re 6-2, but I do think the Timberwolves keep it close.

This should be a really fun game to watch. I'm not sure about betting it, because I feel like the oddsmakers nailed the total and spread—so it's a little tougher to find value here. It's two of the top three picks from the 2020 NBA Draft going at it tonight, and while I feel like Minnesota has the better roster—Charlotte is talented, playoff hungry and playing at home.

It's the playing at home factor that has me taking the Hornets laying 2.5 points. Both teams can easily put up 100-plus points, so if I had to pick betting the spread or the total, I'd go with over 222.5 points and hope for an enjoyable game where the outright winner doesn't matter. With young rosters like this, and a prove-it game between two stars from the same draft class, there should be a lot of points in this matchup.

D'Angelo Russell to notch a double-double is definitely a bet worth placing. He's the veteran point guard going up against the NBA's next young star at the same position, and I think he'll fill his stat sheet to show up LaMelo Ball.

The Bulls, thanks to the reinforcements the front office got for Zach LaVine in the past year, are one of the best teams in the NBA. They’re a game out of first in the East with the No. 7 scoring defense (104.6 PPG). The offense is nowhere near as good, ranked No. 14 ( 108.2 PPG) despite having two players (LaVine and DeMar DeRozan) averaging more than 25 PPG. Chicago is 12-7 ATS and 58% of their games hit the under. The Bulls are an impressive 6-3 outside of Chicago, having gone 3-2 on their recent West Coast road trip with wins over the Clippers and Lakers.

The Magic have strung together four separate losing streaks of two or more games—they're keeping their victories socially distant. Still, there’s a lot to be excited about in Orlando. Cole Anthony has developed into a consistent scorer, Mo Bamba is healthy and lottery picks Franz Wagner and Jalen Suggs are working out. None of that has translated to wins. Their ATS record (8-11) is marginally better than their actual record. Still, Orlando has the 28th-ranked offense (100.8 PPG) and the 24th-ranked defense (110.6 PPG). Victories are hard to come by with bottom five units on both sides of the ball.

The Bulls should roll in this one and I like Nikola Vucevic to have a good game against his former team.

These are the games teams like the Bulls are supposed to win, and teams like the Magic are supposed to lose. A spread nearing double digits isn't as much fun to bet, because we all know what happens late in NBA games. I feel good about hammering the Bulls -8.5 for a comfortable win over the Magic. I have to agree with Kyle, this has all the makings for Nikola Vucevic to show up big. I'll be looking at his double-double odds and feel comfortable in placing a couple of bets in this game.

The total of 213.5 seems too good to be true, so my instinct there is to stick with the under. I always try to imagine what the final score will be, and this one feels like Bulls 100-plus, Magic below 90. Give me the under, there is no way I want to bet a Magic game to hit the over. Out of all three bets, I like Vucevic to ball out for his double-double the most.

Check Out the Latest NBA Odds at SI Sportsbook

The Golden State Warriors crushed the Chicago Bull in Illinois on Friday night, and after the game DeMar DeRozan spoke to the media.
NBA・1 DAY AGO
FastBreak on FanNation

The Chicago Bulls Have Reportedly Signed A New Player

According to ESPN's Adrian Wojnarowski, the Chicago Bulls are signing Malcolm Hill to a 10-day contract.
NBA・2 DAYS AGO
95.7 The Game

With the 2021-22 season now going strong and the Milwaukee Bucks looking to repeat as champs, it’s time to update
NBA・2 DAYS AGO

Steph Curry has been ruled out for Sunday's game between the Golden State Warriors and Minnesota Timberwolves.
NBA・21 HOURS AGO
Sportsnaut

Zach LaVine has been ruled out for the remainder of the game between the Golden State Warriors and Chicago Bulls on Friday night.
NBA・1 DAY AGO
FastBreak on FanNation

The Golden State Warriors beat the Chicago Bulls on Friday night in Illinois, and during the game, Andre Iguodala had an incredible pass.
NBA・1 DAY AGO

PHILADELPHIA (AP) — The Hornets didn’t pop champagne or go wild in the locker room following a win over the Sixers more than five years in the making. There was just a simple message from Gordon Hayward: On to the next game. “We talked about it before the game. We talked about ending the streak,” […]
NBA・2 DAYS AGO
670 The Score

Bulls star guard Zach LaVine suffered a left knee injury early in his team’s eventual 138-96 loss to the Warriors on Friday evening at the United Center and didn’t return. He’ll have an MRI on Saturday.
NBA・1 DAY AGO
Yardbarker

Michael Jordan On Jerry Krause Being Invited To His Hall Of Fame Induction: "I Don't Know Who Invited Him, I Didn't."

During his career, NBA legend Michael Jordan never had an issue in making his feelings known. He has many infamous stories about trash-talking and later on destroying his opponents. So it goes without saying that MJ made quite a few enemies throughout his career. Despite that, he never failed to...
NBA・2 DAYS AGO
FastBreak on FanNation

Timberwolves Injury Report Against The Grizzlies

The Minnesota Timberwolves are in Tennessee to take on the Memphis Grizzlies on Thursday night.
NBA・2 DAYS AGO

The Minnesota Timberwolves and Memphis Grizzlies have announced their starting lineups.
NBA・2 DAYS AGO
Sportsnaut

Wendell Carter Jr. has been ruled out for Saturday's game between the Orlando Magic and Dallas Mavericks.
NBA・1 DAY AGO
ClutchPoints

Live Stream: Watch the game online with fuboTV (free trial). Sign up now for a free seven-day trial. You can follow the game live on the ClutchPoints app. Michael Carter-Williams (Out – Left Ankle): Carter-Williams had surgery on his left ankle back in late August and no timetable has been announced for his return.
NBA・2 DAYS AGO
The Spun

The Los Angeles Lakers have not been a very good team so far this season and franchise legend Magic Johnson isn’t happy. Johnson, one of the greatest players in franchise history, took to social media late on Saturday night to weigh in on the team’s struggles. The Lakers...
NBA・5 HOURS AGO
basketballinsiders.com

In Friday night’s Eastern Conference rematch, the Orlando Magic (7-35) are playing the Charlotte Hornets (23-19) at Spectrum Center. Will Cole Anthony and the Magic put an end to their 10-game losing streak?. Register an account with BetOnline and claim a free bet worth up to $1,000. Orlando Magic...
NBA・2 DAYS AGO
CBS Sports

The experts predicted a win for the Charlotte Hornets, but it's no sure thing at this point. Either team is in a position to win, but they lead against the Orlando Magic 91-88. The top scorers for Charlotte have been point guard LaMelo Ball (18 points), small forward Gordon Hayward...
NBA・1 DAY AGO
FastBreak on FanNation

Draymond Green has been ruled out for the game between the Golden State Warriors and Chicago Bulls in Illinois on Friday night.
NBA・1 DAY AGO