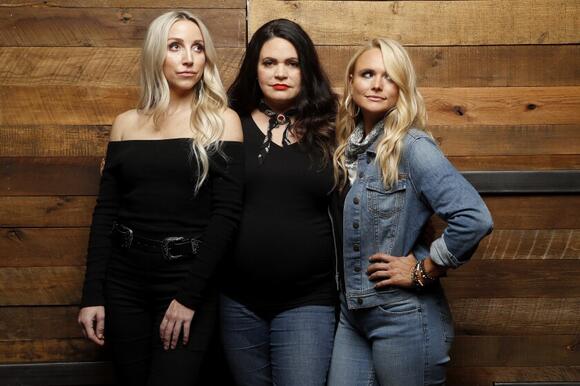 Country star Miranda Lambert readily admits that she doesn't really like Christmas music at all.

The only thing that would get her in the spirit to do a holiday record was singing with her two best gal pals from the Pistol Annies, Ashley Monroe and Angaleena Presley.

“If there was ever a time I would think a Christmas album was fun, it would be with these two girls, for sure," said the Texas-born singer.

“Hell of Holiday” is the album for the holiday survivors, the folks like Lambert who are a little more sarcastic than sentimental, but still can find the meaning of the season through all the tinsel. The trio of singers bring both humor and harmony as they celebrate with hillbilly relatives, get caught up in the hustle and sing Jesus a “Happy Birthday" song.

“We are all sad song lovers, so there’s some moments on this record that have either some some dark humor or some sad song undertones,” said Lambert.

The three wrote the 10 original songs together at Lambert's farm around the holidays last year, penning songs together around bonfires. Monroe brought “Cynthia,” her synthesizer, to work up the melodies.

“She really got us in the Christmas mood,” said Lambert of Monroe's synthesizer skills.

On “Snow Globe,” the trio capture the magic of a white Christmas to hold onto all year long, backed by electric guitars, a saxophone solo and handclaps. On “Harlan County Coal,” Presley sings about lazy husbands, shotgun shells as ornaments and scraping by to afford both presents and the light bill.

While they wanted to incorporate some classic Christmas production, with bells, saxophones and organs, they still wanted the songs to sound like their other albums.

“A couple of songs on the record, I mean, technically, if you take them off of a Christmas album, you wouldn’t even know that they were a Christmas song, which is something that I thought added a bit of Annies to it," said Presley.

In addition to the originals, they also covered Christmas classics, like Merle Haggard's “If We Make It Through December" and a tender version of “Auld Lang Syne."

By the time they finished the record in June, the trio had fully embraced the holidays, with Lambert buying ugly Christmas sweaters to wear in the studio.

“They were really ugly," Lambert said with a laugh. "Cheap Amazon Prime. Like, what can come tomorrow that’s a Christmas sweater?”

They'll give their first TV performance of their holiday music when they appear on “CMA Country Christmas” on Nov. 29 on ABC. Presley and Monroe may have made a true believer out of Lambert, as she hopes the music will become a new tradition for years to come.

“Because it is a holiday record, it will live every year forever. And that makes me really happy,” said Lambert.

Indie icon Cat Power — a.k.a. Chan Marshall — has been releasing fine albums of original material for more than 25 years, but imaginative covers have always been a big part of her sound: Her sparse debut LP, “Dear Sir,” which featured a song written by Tom Waits and one by This Kind of Punishment, set the mold for a carefully curated mixture of classic and contemporary tracks written by others. “Covers” is actually Marshall’s third all-covers album. She released “The Covers Album” in and “Jukebox” in 2008, the latter arriving in the wake of “The Greatest,” the most commercially successful...
MUSIC・9 DAYS AGO
24/7 Wall St.

This Is the Best Cover Song of All Time

A 24/7 Tempo analysis reveals that the best cover song of all time is "Unchained Melody" by the Righteous Brothers.
MUSIC・4 HOURS AGO
Daily Mail

Christina Aguilera released her second Spanish-language project on Friday, which comes almost 22 years after her first one. The 41-year-old pop star's EP La Fuerza follows 2000's Mi Reflejo, and features the singles Pa' Mis Muchachas, Somos Nada, and the latest, Santo. The siren took to Instagram to share her...
CELEBRITIES・2 DAYS AGO
The Independent

Following his sudden passing, many fans are now curious to know what Meat Loaf’s net worth was before his death. The rock star, known for songs like “Bat Out of Hell,” among others, died at the age of 74 on January 20, 2022, leaving behind a career spanning six decades and millions of records sold around the world. Meat Loaf—who was born Marvin Lee Aday and later known as Michael Lee Aday—was born on September 27, 1947, in Dallas, Texas to parents Wilma and Orvis. Meat Loaf’s mother Wilma was a schoolteacher and choir singer, whereas his dad Orvis, a former...
DALLAS, TX・2 DAYS AGO
Los Angeles Times

He would do anything for rock (yes, even that): How Meat Loaf turned shamelessness into stardom

The singer, who died Thursday at age 74, pushed his voice too hard in lyrics that were too corny over arrangements that did way too much.
MUSIC・2 DAYS AGO
The Independent

Collaborators who worked and sang with Meat Loaf have shared fond memories of the US rocker as they described his death as “our loss, Heaven’s gain”.The “kind and talented” musician was praised by his fellow artists for sharing his love of music and performing with the world.A post on his official Facebook page announced he had died aged 74, with his wife Deborah at his side and added that his daughters, Pearl and Amanda, “and close friends have been with him throughout the last 24 hours”.Meat Loaf, who was born Marvin Lee Aday but was also known as Michael, sold...
MUSIC・2 DAYS AGO
GMA

The music world is mourning the death of "Bat Out of Hell" singer Meat Loaf.
CELEBRITIES・2 DAYS AGO

Hollywood is remembering the life and legacy of Meat Loaf, one of rock’s greatest showmen, after his death at 74 was announced by his family on Friday. Born Marvin Lee Aday, the rock superstar beloved by millions was known for albums like Bat Out of Hell — one of the top-selling albums in history selling more than 40 million copies globally —  as well as a number of power anthems, including “Paradise By the Dashboard Light,” “Two Out of Three Ain’t Bad,” and “I’d Do Anything for Love (But I Won’t Do That).” Throughout his career, Meat Loaf performed on stage around...
CELEBRITIES・2 DAYS AGO
CLASSIX 107.9

JANET JACKSON celebrates the 40th anniversary of Janet’s first album and one of the best-selling, highest-earning artists in music history. Lifetime and Philo bring you full, unprecedented access to the global icon, Janet Jackson, in an intimate, honest, and unfiltered look at her untold story. The two-night documentary event, JANET JACKSON., premieres Friday, January 28th at 8/7c […]
CELEBRITIES・2 DAYS AGO
GMA

Luke Combs and his wife Nicole announced they are expecting a baby boy.
CELEBRITIES・3 DAYS AGO
Outsider.com

“Blue Bloods” actress, Bridget Moynahan found a super sweet way to wish her TV daughter, Sami Gayle, a happy 26th birthday!. In a recent Instagram post, Moynahan shares an adorable photo of her co-star holding a flowery birthday cake. Can we all agree that that blue coloring is calling our names? Sami Gayle is all smiles as she holds the multi-colored masterpiece. But based on Moynahan’s caption, the cake wasn’t for her TV daughter.
CELEBRITIES・1 DAY AGO

UPDATE (1/21): On Friday, LiveNation announced that the When We Were Young Festival will now feature a second date with the exact same stacked lineup on Sunday, Oct. 23. Featuring multiple stages across festival grounds, earlier acts will perform 20- to 30-minute sets while top-billed acts will perform sets that are 45 minutes or longer. “We have seen a lot of excitement around this festival and we look forward to putting on an incredible event for all of the fans this October,” festival organizers said in a statement, adding that the event is “thoroughly planned.” *** Paramore might not be interested in rehashing the...
MUSIC・2 DAYS AGO
Hello Magazine

Christina Aguilera pulls off her most daring look yet

Christina Aguilera just turned heads with a racy look fans were not prepared for. The Santo singer was promoting her new album, La Fuerza, her first Spanish project in 22 years, and this post will be difficult to forget. Taking to Instagram, Christina shared several pictures in which she was...
CELEBRITIES・2 DAYS AGO
iHeartRadio

Christina Aguilera Opens Up About Her New Spanish Album

Five years after its inaugural event in Santa Ana, CA, the Emo, Pop-punk, and Indie-filled ‘When We Were Young Festival ‘is making its return for a full day of music on Saturday, October 22 at the Las Vegas Festival Grounds.
LAS VEGAS, NV・2 DAYS AGO
countryliving.com

Dolly Parton turned 76 on January 19 and took to Instagram to honor the occasion. The “Jolene” singer shared a throwback photo in her “birthday suit.”. At 76, she continues to be the witty, hard-working artist we know and love. The Queen of Country, Dolly Parton, turned...
MUSIC・2 DAYS AGO
musictimes.com

It seemed like Malone's label is delaying the release of his next album. Last November 2021, Post Malone teased the release of the follow-up to 2019's 'Hollywood's Bleeding' with the track 'One Right Now,' which was a joint effort with The Weekend. Austin Richard Post, more commonly known as Post...
CELEBRITIES・12 DAYS AGO
countryliving.com

Jamie Lee Curtis admitted that she has “often struggled with the idea of love” after her immediate family went through 13 divorces. She opened up about those feelings in an Instagram post about her late parents, Tony Curtis and Janet Leigh. The 63-year-old is happily married to her...
RELATIONSHIPS・3 DAYS AGO