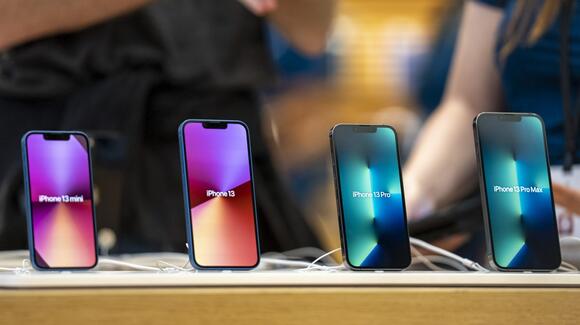 While today may make it official, Black Friday has been seeping out for about a month. Apple Inc. ( NASDAQ: AAPL ) is joining the party as well today.

Apple's main website announces that the "Apple Shopping Event is on," and it includes special offers on a variety of products. Third-generation AirPods, for example, maintain their $179 list price but come with an Apple Gift Card if you purchase by Monday. Merchants such as Walmart, Target, Amazon, and Best Buy are offering AirPods 3 for as low as $149.99, AirPods Pro with MagSafe for $159.00, and AirPods 2 for $99.99.

MacRumors has a Black Friday Roundup with its recommendations and updates.

Both 9to5Mac and The Verge reported Thursday that Apple analyst Ming-Chi Kuo wrote in a note to investors that Apple will release an augmented reality (AR) headset late next year and that the company's goal is to replace the iPhone with AR in the next 10 years.

Kuo also said that next year's AR headset will include "the same computing power level as the Mac." That means the headset can operate independently of a Mac or an iPhone and the device "supports a comprehensive range of applications rather than specific applications." Apple's goal, according to Kuo, is an entirely independent AR ecosystem, not unlike the one Apple built around the iPhone.

The first AR headset will include two processors, one with computing power "similar" to that of Apple's M1 chip and a second that "will be in charge of sensor-related computing." Kuo also predicts that the headset will be equipped with two Sony 4K micro-LED displays, indication potential support for virtual reality (VR) applications.

Kuo also noted that Apple's sole supplier of ajinomoto build-up film (ABF), a critical component of a chip's insulating substrate, will be a "leading beneficiary" of Apple's AR initiative .

Italy's competition regulators have fined Apple and Google $11.3 million each for alleged misuse of user data. Earlier this week, Italy fined Apple and Amazon a combined $225 million for anti-competitive practices.

Four people entered a Santa Rosa, California, Apple Store on Wednesday and stole more than $20,000 worth of Apple products in another of dozens of similar smash-and-grab incidents in San Francisco and Los Angeles.

Walmart is offering major savings on a large part of its inventory this week. During its winter savings event, the site has discounted home and kitchen items along with tech, toys, fitness equipment, cleaning supplies and other items. With a variety of departments included, customers have access to big-time savings on some high-end products from Apple, Coach, Samsung and Bissell.
ELECTRONICS・9 DAYS AGO
SPY

This Ultra-Thin Wireless Charger Has 45,000 5-Star Reviews and Is Just $11 Today

All products and services featured are independently chosen by editors. However, SPY may receive a commission on orders placed through its retail links, and the retailer may receive certain auditable data for accounting purposes. Nothing annoys people more than messy charging cables just randomly strewn on floors and by outlets. It’s an eyesore that’s nearly impossible to hide. Thankfully, there’s a sleek looking wireless charging pad that not only helps to mitigate the clutter, but it also can conveniently charge your phones while on the go. Best of all, this ultra-thin wireless charging pad is only $11 — a 45% discount...
ELECTRONICS・1 DAY AGO
The Independent

The smart home is increasingly commonplace, with smart thermostats, connected smoke alarms, colour-changing light bulbs, voice-controlled speakers and much more.But the main entry point to this world is through a simple but important accessory: the smart plug.With the smart plug, you can make a “dumb” gadget smart. For instance, use it for the bedside lamp so instead of struggling across a dark room with your hands full, say, “Alexa, turn on the bedside light”.Alexa is Amazon’s voice assistant, though you can also say “Hey, Google” or “Hey, Siri” for products that respond to Google Assistant or Apple HomeKit smart home...
ELECTRONICS・2 DAYS AGO
The Independent

Google is building an augmented reality headset called Project Iris that could ship in 2024.The device will use outward-facing cameras to overlay computer graphics onto the real world, and apparently work on battery power.The headset would be powered by a custom Google processor and run Android, although it is possible it could also use an as-yet undeveloped operating system, according to a report from The Verge. Members of Google’s Pixel team are reportedly working on the hardware, but it is not yet known if it will be Pixel-branded like its smartphones.The core team working on the headset is made of...
TECHNOLOGY・6 DAYS AGO

Apple to give customers option to repair their own iPhones

This year, Apple will roll out a new self-service repair program.
CELL PHONES・2 DAYS AGO
9to5Mac

All of Thursday’s best deals are now up for the taking and headlined by $299 off Apple’s 2020 iPad Pros. That’s alongside M1 iMacs returning to all-time lows as well as $400 off iPhone 13 series handsets, no trade-in required. Hit the jump for all that and more in the latest 9to5Toys Lunch Break.
TECHNOLOGY・14 DAYS AGO
The Motley Fool

Amazon's Ad Business Will Continue to Outpace in 2022

The high-margin business is a significant source of profits, and it's growing fast.
BUSINESS・1 DAY AGO
9to5Mac

Heading into the weekend, all of today’s best deals are headlined by Apple’s AirPods 3 returning to the all-time low of $140. That’s alongside official iPhone 12 series MagSafe cases from $10 and Apple’s white 12.9-inch iPad Pro Magic Keyboard at $49 off. Hit the jump for all that and more in the latest 9to5Toys Lunch Break.
ELECTRONICS・13 DAYS AGO

Apple has released a new Valentine’s Day Gift Guide online to help shoppers who are buying gifts for a loved one this upcoming Valentine’s Day, highlighting AirPods, AirTags, iPhone, iPad, and more. Apple says “Say it with a gift from Apple,” promoting free engraving on selected products, 6...
ELECTRONICS・6 DAYS AGO
SPY

All products and services featured are independently chosen by editors. However, SPY may receive a commission on orders placed through its retail links, and the retailer may receive certain auditable data for accounting purposes. Smart displays haven’t completely gotten the respect they deserve. This is partly because they so closely resemble digital photo frames, which are some of the most maligned gadgets of the last 20 years. But slowly and surely, the world is coming to realize that the best smart displays actually have a fair amount of utility when it comes to video calls and orchestrating dozens of smart home...
ELECTRONICS・1 DAY AGO
9to5Mac

After Apple subtracted Beats Pill+ from its lineup, here’s what could replace it

Earlier this week, Apple gave its Beats Pill+ speaker the OG HomePod treatment and changed its status from a “product that remains in our lineup” to finally discontinued. Finally, because there was never any real change to the Bluetooth speaker from 2015 unless you really like red. Meanwhile, Apple has conceded to market to competition that use Apple’s own wireless audio technology.
ELECTRONICS・14 DAYS AGO
MacRumors Forums

When Apple Might Enter the Virtual and Augmented Reality Race

As Meta and Microsoft ramp up their AR and VR tech futures, analysts have been waiting on word from Apple, but the consumer tech giant is reportedly delaying such an announcement. Doug Astrop, a managing partner at Exponential Investment Partners, joined Cheddar to dive into the rumors about the possibilities of a foray into the metaverse by Tim Cook's megacorp sometime in 2022 or 2023. "We can't really predict with a great deal of certainty how it's going to play out, but I'm confident Apple's going to be a big player and do very well in any scenario that unfolds," said Astrop.
ELECTRONICS・13 DAYS AGO
Ars Technica

It's time for another Dealmaster. Our latest roundup of the best deals we can find from around the web includes a rare discount on HBO Max subscriptions. Right now, new or lapsed subscribers to the video streaming service can take 20 percent off the cost of a monthly subscription, for up to 12 months in total. The deal applies to both the ad-supported and ad-free plans, bringing them down to $8 per month (from $10) and $12 per month (from $15), respectively. If you run the offer out for the full 12 months, it'll result in a $24 discount for those who subscribe to the ad-supported tier, or a $36 discount for those who go for the ad-free option. The deal doesn't lock you into subscribing for a set period of time, but note that, by default, the service will be set to auto-renew at the usual monthly price once your discounted period ends. The service's offer page says this deal is for the US only and will last until January 25.
ELECTRONICS・12 DAYS AGO
24/7 Wall St.

An alleged scam app reappears in the App Store, and a report says Apple sent a team to Korea to find suppliers for electronic components for its Apple Car.
CELL PHONES・14 DAYS AGO
Hot Hardware

Save Up To 61 Percent On Earbuds From Apple, Bose, JBL, Sony And More With These Hot Deals

Are you earbuds on their last legs? That's a bummer, though it's also an opportunity to treat yourself to a fancier set, perhaps one with active noise cancellation and adaptive EQ that automatically tunes your music to your ears. Both of those features happen to be present on Apple's AirPods Pro, which is on sale right now. So are a bunch of other earbuds and headsets.
ELECTRONICS・6 DAYS AGO
wraltechwire.com

Google has internally kickstarted the development of an augmented reality headset that will “blend computer graphics with a video feed of the real world” to deliver an immersive AR experience, with launch tentatively set for 2024, according to a report from The Verge. The report describes the headset,...
ELECTRONICS・6 DAYS AGO
wccftech.com

Grab yourself a fully unlocked and renewed iPhone XR smartphone with 64GB of storage for just $299 right now. Apple iPhone XR Smartphone with 64GB Storage, A12 Bionic, Wireless Charging and More Going for Just $299. This is an extremely limited time deal and will likely go out of stock...
CELL PHONES・8 DAYS AGO