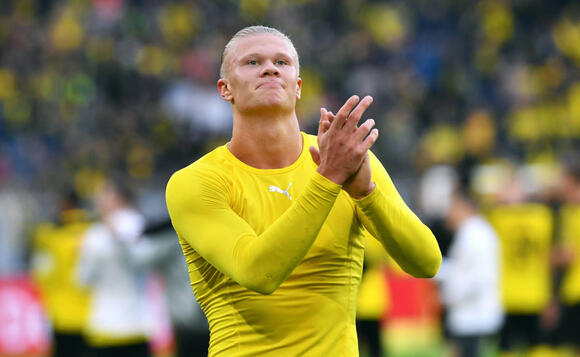 The Borussia Dortmund frontman is expected to be the most in-demand footballer of the upcoming calendar year, with interest intensified by an attractive release clause that is set to become active next summer.

The young striker is being tipped by many to seek a new challenge elsewhere in Europe following his impressive goalscoring exploits in the Bundesliga, with it being widely understood that a €75 million release clause will become active.

One club who are expected to be well amongst the leading pack for Haaland is Manchester City - with Etihad officials still looking for their long-term replacement for the recently departed club legend, Sergio Aguero.

However, the latest information to emerge from Europe on Friday surrounding the future plans of Erling Haaland will come as a damaging blow to all those associated with Pep Guardiola's club.

According to the information of Mario Cortegana at Goal, Erling Haaland has told his entourage - which features super agent Mino Raiola - that a move to Real Madrid 'holds the greatest appeal' to him.

However, it is clarified within the report that the former RB Salzburg striker has yet to make a final decision on his future - providing fans of Manchester City with some element of hope that all is not over in regards to the Haaland case.

Cortegana touches on the situation surrounding English clubs and Erling Haaland, while mentioning Manchester City within the section.

It is stated that Premier League giants Manchester City, Manchester United, Chelsea and Liverpool have all been 'linked' with Erling Haaland, and that Goal understand that the Dortmund striker is a 'fan' of English football.

According to Goal, Erling Haaland knows he would be the 'main star' at any club in the Premier League, but will wait until well into the new year before making his mind up on any possible next move in 2022.

Elsewhere for Manchester City, their alternative striker options appear to be few and far between, with Tottenham forward Harry Kane still seen to be a viable target in some quarters.

However, an additional name that could begin to catch the eye for Etihad officials is that of Fiorentina striker Dusan Vlahovic - who is seemingly set for a high-profile change next year after rejecting the advances of his current employers over a new and improved deal.

Erling Haaland: Borussia Dortmund striker opens up on why he felt it was the right time to talk about his future

Erling Haaland says it is time to "move on" from comments he made earlier this month in which he said Borussia Dortmund were pressuring him to make a decision over his future. Haaland, who scored before going off injured in Saturday's 3-2 victory over Hoffenheim, has a contract with Dortmund until the summer of 2024, with a £64m release clause understood to come into effect this summer.
PREMIER LEAGUE・2 HOURS AGO
CityXtra

Following the failed pursuit of Tottenham forward Harry Kane and Juventus striker Cristiano Ronaldo last summer, Manchester City supporters will be well aware of the frustrations that can come with attempts to fill Sergio Aguero's position at the club. Those such frustrations may continue in the coming few months, as...
PREMIER LEAGUE・2 DAYS AGO
FanSided

Months ago, it seemed like there would be a handful of suitors for Erling Haaland. Manchester United, Chelsea, Manchester City, PSG, Barcelona, Liverpool, and Bayern Munich were all seemingly competitors with Real Madrid for the Borussia Dortmund star. But now, the pretenders have dropped out. Bayern don’t usually spend that...
PREMIER LEAGUE・2 DAYS AGO
CityXtra

After seeing their 12-game winning run in the Premier League be halted by Southampton following their 1-1 draw at St. Mary's at the weekend, Manchester City players and staff have been handed a two-week break before resuming action in the FA Cup against Fulham on February 5th. The likes of...
PREMIER LEAGUE・1 DAY AGO

Real Madrid scored twice in the final 10 minutes to avoid an embarrassing LaLiga home defeat to Elche.The Valencians were on course for a memorable win at the Bernabeu as they led 2-0 after 82 minutes, with goals from Lucas Boye and Pere Milla.But Luka Modric got his side back in it from the spot and then Eder Militao made it 2-2 in the second minute of time added on as Carlo Ancellotti’s men extended their lead at the summit to four points.💪 That scoring feeling! @edermilitao | #RealMadridElche pic.twitter.com/i9eyHplrmf— Real Madrid C.F. 🇬🇧🇺🇸 (@realmadriden) January 23, 2022Barcelona also needed...
SOCCER・2 DAYS AGO
fourfourtwo.com

Transfer news is going into overdrive right now – but Chelsea, Manchester City, Liverpool and Manchester United are all reportedly interested in one long-term target. Endrick, a 15-year-old sensation from Brazil, has caught the attention of some of Europe's biggest superclubs, after notching an unbelievable 165 goals in 169 games for Palmeiras youth teams. Now, the Copa Libertadores champions are said to value the talent at over £30m.
PREMIER LEAGUE・11 HOURS AGO
CityXtra

It has been reported over the course of the weekend, and into the new week, that Manchester City are set to announce the signing of Julian Alvarez from River Plate, for a fee in the region of £20 million. With Pep Guardiola’s side operating without the presence of a...
PREMIER LEAGUE・2 DAYS AGO
CityXtra

Grealish has had his fair share of criticism for his performances since making a record-breaking £100 million move to Manchester City from Aston Villa in the last summer transfer window. While it cannot be denied that the Englishman has made a slow start to life at the Etihad Stadium,...
PREMIER LEAGUE・2 DAYS AGO

Eddie Howe and his Newcastle United squad headed for Saudi Arabia at the weekend having breathed new life into their bid for Premier League survival with a hard-fought victory at Leeds.However, while Howe and his staff put the players through their paces at a warm weather training camp in Jeddah, work continued apace behind to scenes to add to the January acquisitions of Kieran Trippier and Chris WoodHere, we take a look at some of the players who could follow the duo to St James’ Park during the final week of the winter window.Sven BotmanThe Magpies made the capture of...
PREMIER LEAGUE・2 DAYS AGO
Sports Illustrated

It was the first time an outfield player started as a goalkeeper at a major international tournament, and he fared quite well.
FIFA・2 DAYS AGO
The Independent

The sporting weekend in pictures

A controversial penalty helped Liverpool beat Crystal Palace 3-1 and close the gap to nine points on Premier League leaders Manchester City.Jurgen Klopp’s side took advantage of City being held 1-1 at Southampton to inject fresh life into the title race, while Newcastle moved to within one point of safety thanks to a 1-0 win at Leeds.Away from football, England beat West Indies by a single run in their second T20 in Barbados, despite Akeal Hossain smashing 28 from the final over, including three sixes off the last three balls.Here, the PA news agency takes a look at the sporting weekend in pictures. Read More Moeen Ali admits West Indies batting depth ‘scary’ after narrow England winTampa Bay Buccaneers fall short of incredible comeback against Los Angeles RamsAnxious England hold off stirring West Indies fightback to level T20 seriesIran’s Hossein Vafaei makes history with Snooker Shoot Out victoryReal Madrid snatch late point as Barcelona win at the deathRalf Rangnick lauds Man Utd’s Harry Maguire for producing captain’s performance
PREMIER LEAGUE・2 DAYS AGO

The Premier League will meet with police this week to discuss concerns over increased incidents of crowd behaviour and disorder.Last weekend there were incidents in two separate matches of objects being thrown at players while, overall this season, there has been an increase of 47 per cent in football-related arrests.The number of cases is up to 802 from 547 in 2019-20, the last campaign from which comparable data is available due to behind-closed-doors matches.There have also been more incidents of fans encroaching onto the pitch, the latest coming during Southampton’s home match with Manchester City.The Premier League is working collaboratively...
PREMIER LEAGUE・1 DAY AGO
The Independent

Mikel Arteta bemoaned a “slow” and “leggy” Arsenal performance before casting doubt over any January signings as the Gunners were held to a goalless stalemate by Premier League bottom side Burnley The Clarets have seen a host of games postponed this month due to not having enough players available and fell to the foot of the table as their rivals were able to fulfil fixtures.Wins for fellow relegation candidates Norwich and Newcastle earlier in the weekend only heaped pressure on Burnley, but Sean Dyche’s side battled to a hard-fought point against a below-par Arsenal.The Gunners are still without a win...
PREMIER LEAGUE・2 DAYS AGO
sportstalkline.com

Manchester City are not obligated to make moves this January but Liverpool and Chelsea require additions if they are to catch up with the league leaders Top teams around England are set for another go at the transfer window with the coming of winter. Whilst most clubs would prefer to not dabble into the January…
PREMIER LEAGUE・2 DAYS AGO
CityXtra

In October 2021, a consortium consisting of the Reuben Brothers, PCP Capital Partners, and the Public Investment Fund of Saudi Arabia (PIF) completed the takeover of Newcastle United. After years and years of discontent under the previous ownership headed up by Mike Ashley, the Magpies were finally bought-out and became...
PREMIER LEAGUE・1 DAY AGO
The Independent

FC Porto are demanding a fee of €60m (£50.2m) for Tottenham Hotspur target Luiz Diaz, as the London club attempt to negotiate a deal that involves significant add-ons.Antonio Conte has been demanding upgrades on his squad, and it has led to a frenetic final week of the window for Spurs already. There is a feeling a deal can be done for Diaz, but the Tottenham hierarchy are currently willing to offer a fee of around €45m with the rest of the agreement made up through add-ons. Porto are so far reluctant, as the Colombian international has a release clause of...
PREMIER LEAGUE・1 DAY AGO
LFCTransferRoom

Erling Haaland Believes Robert Lewandowski Is The Best Player In The World, Leaving Liverpool's Mohamed Salah Out Of Top Three

Speaking with ESPN, the Norwegian striker makes his views publicly. Haalnd's Bundesliga rivals Robert Lewandowski is the man to top his list, with Lionel Messi and Karim Benzema filling his second and third place. "Top 3 in the world? You have to say Lewandowski is number one and then for...
SOCCER・22 MINUTES AGO
The Independent

What the papers sayThe Daily Mail says Newcastle are chasing the signature of Brighton midfielder Yves Bissouma. It is believed Brighton would part ways with the 25-year-old Mali international for £50m, which would shatter Newcastle’s club-record transfer fee by £10m.Liverpool defender Joe Gomez is reportedly on the radar of Steven Gerrard and Aston Villa. According to The Sun, the 24-year-old England international centre-back is thought to have been on Gerrard’s wishlist for a while, with a possible January move on the cards.The London Evening Standard reports Arsenal are considering a move for Real Sociedad forward Alexander Isak, as their hopes...
PREMIER LEAGUE・1 DAY AGO