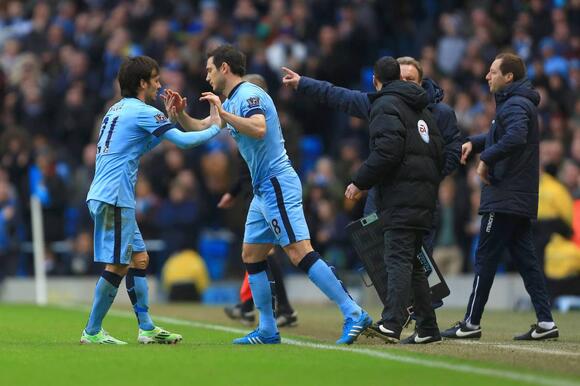 Lampard spent a season at the Etihad Stadium after the end of his contract at Chelsea in 2014, during which he registered eight goals and four assists in 38 appearances across all competitions.

The former Derby County boss, who was sacked as Chelsea manager in January, has been linked with a series of clubs since his departure from Stamford Bridge, where he spent 18 months as head coach before being replaced by Thomas Tuchel.

Six years on from the end of his Manchester City spell, Lampard has showered praise on David Silva despite having shared the dressing room with the Real Sociedad star for just one season.

The Englishman said, while speaking on Sky Sports' The Overlap with Gary Neville, "A player I loved playing with for style was David Silva," which is often something one expects to hear from a former Manchester City player.

Lampard continued, "Everything I expected when I went to City; we'd go drink beer with the lads and he'd be there till the end, one of those. In training, his manner, humility, style - I loved him."

It is safe to say that Lampard's high regard for Silva is matched by every player and staff member who has had the pleasure of working alongside the Spaniard during his ten-year spell in Manchester.

Having often been named as the 'best player in tight spaces' by Manchester City boss Pep Guardiola, David Silva has left a true legacy behind at the Etihad Stadium after enjoying what was nothing short of a sensational, trophy-laden career in England.

Contract will not stop England sacking me, admits Gareth Southgate

Gareth Southgate has admitted that having two years left on his contract will not protect him from the sack if England flop at the World Cup this winter. Southgate, whose deal runs until December 2024 and takes in that year’s European Championship, is under growing pressure before England close their disastrous Nations League campaign by hosting Germany at Wembley on Monday evening. The manager was booed by his own supporters after his side’s 1-0 defeat against Italy in Milan last Friday, a result that relegated the Euro 2020 finalists to the second tier of the Nations League, and the 52-year-old knows his future could depend on what happens in Qatar this winter.
SPORTS・16 MINUTES AGO
City Transfer Room

Milan Skriniar is currently one of the most sought-after defenders in world football, most recently being linked with French giants PSG.
PREMIER LEAGUE・2 HOURS AGO
City Transfer Room

Phil Foden has become an integral part of Pep Guardiola's Manchester City side since making his first team debut in 2017. With the 22-year-old's contract running down, rumours have been circulating about a potential new deal to keep the Stockport-born superstar at the club.
PREMIER LEAGUE・6 HOURS AGO
City Transfer Room

Manchester City: International Round Up

Manchester City players were in action tonight for their respected countries, and we take a look at how they got on.
PREMIER LEAGUE・2 DAYS AGO

Watch: Manuel Akanji Scores and Gets An Assist For Switzerland

Manchester City's Manuel Akanji scored and got an assist for Switzerland in their Nations League game against Spain.
SOCCER・23 HOURS AGO
City Transfer Room

Despite the signing of Sergio Gomez from Anderlecht in the summer, Manchester City could potentially look to better their depth at left-back at the end of the 2022/23 season.
PREMIER LEAGUE・1 DAY AGO
City Transfer Room

Erling Haaland is currently one of the most in-form players in the world right now, taking the Premier League by storm since joining Manchester City in the summer.
PREMIER LEAGUE・1 DAY AGO