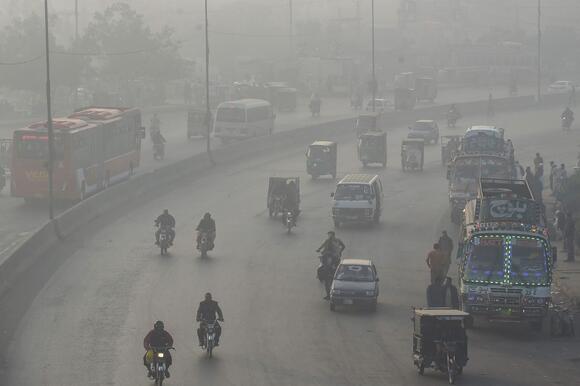 Pakistan ’s northern Lahore city will implement lockdown-like measures by extending its weekends until mid-January next year to tackle toxic smog that has blanketed the country’s agrarian states during the winter season.

Authorities in the country’s second-largest city and the capital of Punjab province will shut schools and offices every Monday until 15 January 2022, leading to an extended weekend in an attempt to reign in choking air pollution , which has led to clouds of thick brown smog engulfing the city and its surrounding areas.

Punjab’s relief commissioner Babar Hayat Tarar said in his directive that the efforts were aimed to act “as a preventive and speedy remedy” to combat air quality levels that have shot up in Lahore and the areas surrounding the city.

The directive stated that the efforts were being taken after the “persistent deterioration in Air Quality Index of the city of Lahore, fluctuating from satisfactory to poor levels, which is likely to cause breathing discomfort, respiratory tract diseases and heart diseases.”

The order will only be enforced in Lahore and the territorial limits of Lahore’s metropolitan corporation, after the city had earlier topped a list of cities with the most polluted air in the world after the air quality level shot up to 300, according to IQAir, a Swiss tech company that operates AirVisual, a real-time, air quality information monitoring platform.

The city’s current AQI has now dipped to 234, which is, however, still in the unhealthy category. An AQI level of 100 or below is considered moderate.

The cities of Pakistan’s Punjab province and India’s northern belt, including its side of Punjab, the northern Haryana and Uttar Pradesh states and national capital Delhi suffer dramatic increases in pollution levels every year, leaving millions of citizens on either side of the border gasping for breath.

Much like India , Pakistan’s air pollution is also the result of year-round emission sources such as transport, factories and construction activity.

The seasonal practice of crop burning, which turns into a visible smog as smoke mixes with fog as the winter air arrives, is yet another existential problem for which regional governments have failed to provide farmers with sustainable alternatives.

India’s Supreme Court, just days ago, unleashed a scathing attack on the federal government and Delhi’s state government, saying short-term measures taken by Delhi , similar to the one taken by Lahore, to shut schools and offices were “very ad hoc”.

“ This is the national capital. Look at the signal we are sending to the world,” one of the Supreme Court judges, sitting in a three-judge bench, said on Wednesday.

Lumbering tanks and the deafening roar of fighter planes echoed through New Delhi on Wednesday as India's military showcased its might on Republic Day.  A heavy security presence ringed Wednesday's official programme after the government was embarrassed on last year's Republic Day by chaotic protests in the capital.
INDIA・2 DAYS AGO
abc17news.com

LAHORE, Pakistan (AP) — Police say a powerful bomb has exploded in a crowded bazar in in Pakistan’s second largest city of Lahore, killing at least two people and wounding 26 others. A senior police official said the dead and wounded had been transported to a nearby hospital, where some were listed in critical condition. Officers are still trying to determine what kind of device was used for the attack. According to witnesses, the blast was so powerful that it damaged several shops near the eastern city’s famous Anarkali bazar. No one immediately claimed responsibility for the bombing, but it comes days after the Pakistani Taliban shot dead three police officers.
PUBLIC SAFETY・8 DAYS AGO
AFP

Security beefed up in Pakistan capital after deadly Lahore blast

Security was beefed up across Pakistan's capital Friday, police said, a day after three people were killed and 22 wounded by a bomb in the eastern megacity of Lahore. Earlier this week a policeman was killed and two others wounded in a drive-by motorcycle shooting in the capital by two TTP militants who died in return fire.
PUBLIC SAFETY・7 DAYS AGO
The Associated Press

ISLAMABAD (AP) — The Pakistan Cricket Board says “robust” COVID-19 health and safety protocols are in place ahead of its month-long domestic Twenty20 competition in Karachi and Lahore, with several foreign cricketers participating in a six-team event. “In the present-day environment, all international sport events are going...
SPORTS・2 DAYS AGO

Lahore [Pakistan], January 24 (ANI): Pakistan Police failed to track down the terrorist involved in the bomb blast in Anarkali market in Lahore on Thursday as the CCTV cameras of the Punjab Safe City Authority were found to be dysfunctional, reported DAWN. A law enforcement official regretted, "We were hopeful...
PUBLIC SAFETY・4 DAYS AGO
Newsweek

Authorities in Uganda are carrying out an investigation into the untimely demise of a Saudi national after getting trampled to death by an elephant. The tragedy occurred on Tuesday at the Murchison Falls national park, which is a renowned tourist attraction in Africa. According to Independent, the deceased was attacked by an elephant while taking a rest.
ACCIDENTS・1 DAY AGO
AFP

Saudi Arabia and Thailand have announced the resumption of diplomatic ties, after more than three decades of frozen relations linked to the theft of jewels from a Saudi palace. Saudi Arabia had long accused Thai police of bungling their investigation into the jewel theft, with allegations that the stolen gems were snapped up by senior officers.
ASIA・2 DAYS AGO

The Taliban must uphold the fundamental human rights of women and children, the United Nations chief said Wednesday, urging the international community to release frozen Afghan aid to prevent families from selling their babies to buy food. Over half of all Afghans face "extreme levels of hunger," Guterres told the council, and "some families are selling their babies to purchase food."
CHINA・2 DAYS AGO
AFP

England on Thursday lifted coronavirus restrictions imposed to tackle the Omicron variant, with masks no longer required in enclosed places and vaccine passports shelved. Face masks were required in all enclosed spaces and, controversially, vaccine documentation also was to enter places such as nightclubs, football grounds and large-scale events.
PUBLIC HEALTH・1 DAY AGO
Advanced Television

Pakistan clamps down on Starlink pre-orders

Pakistan is echoing India in its decision to ban Elon Musk’s Starlink from soliciting pre-orders to its broadband-by-satellite system. Pakistan’s Telecommunication Authority (PTA) announced on January 19th that Starlink had neither applied for, nor obtained, any licence from the PTA to provide Internet services to the country. “The...
WORLD・4 DAYS AGO
AFP

US warns firms over doing business in Myanmar

The US government warned companies Wednesday to be extremely wary of doing business in Myanmar, citing the risks of being linked to a military government involved in lawlessness and human rights abuse. Those involved with businesses controlled by the military regime "run the risk of engaging in conduct that may expose them to significant reputational, financial, and legal risks," including breaking sanctions and money-laundering laws, according to a statement from six cabinet-level departments. Investors and traders were warned specifically to avoid state-owned enterprises, the gems and precious metals sector, real estate and construction projects, and the arms business. "These entities and sectors have been identified as primary industries providing economic resources for Burma's military regime," the statement said, using the former popular name for the country.
FOREIGN POLICY・2 DAYS AGO
optometrytimes.com

At least two dead, 22 wounded by bomb in Pakistan's Lahore

At least two people were killed and 22 wounded Thursday by a bomb blast in a busy shopping district of the Pakistani megacity of Lahore, police and officials said. The attack was claimed on Twitter by a spokesman for the Baloch Nationalist Army, one of several ethnic separatist groups that have been waging an insurgency for years in southwest Pakistan.
PUBLIC SAFETY・8 DAYS AGO