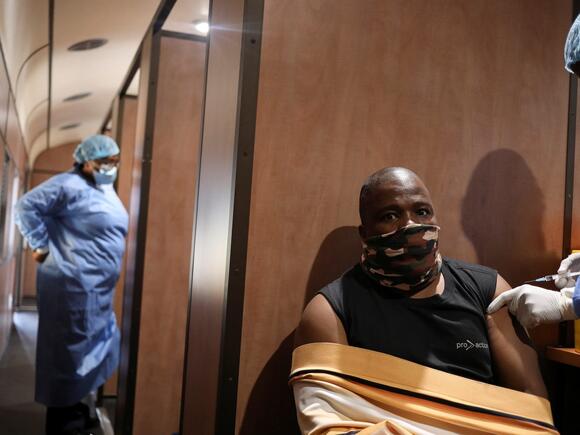 As coronavirus vaccines were produced, approved, and rolled out, health experts said the doses needed to make it around the world, not just to the richest countries.

This was needed, they said, to reduce the rates of death and serious illness in poorer nations, and to protect their populations.

They also mentioned another reason: The more the virus spreads, the more likely it is to mutate and result in a strain that could become more dangerous to everyone, including the vaccinated.

A new variant, dubbed B.1.1.529, has been mostly identified in Botswana and South Africa, as well as in Hong Kong, where it was imported by a traveler.

A relatively small number of cases has been discovered so far, but the variant has been spreading rapidly, officials said.

Experts are describing B.1.1.529 as worrying, pointing to its high number of mutations, which means it could render existing antibodies, vaccines, and treatments less effective, as Insider's Dr. Catherine Schuster-Bruce reported .

Scientists are trying to figure out whether it's more infectious, more deadly, or both.

Many experts have already said that it's the worst variant they've seen since the pandemic began.

It's not clear exactly where the new variant developed. It could have been in South Africa, in Botswana, in a neighboring country, or somewhere else entirely.

But both those countries have low vaccination rates, and they've documented the struggle in securing doses, including accusing rich nations of hoarding vaccines.

As of Thursday, 23.51% of people in South Africa and 19.58% in Botswana have been fully vaccinated, Our World in Data reported .

This means the nightmare scenario could be arriving in just the way experts have warned about.

Experts warned of this for months

The World Health Organization has repeatedly urged richer countries to share or buy fewer vaccine doses, and to make sure poorer nations have their first doses before distributing booster shots.

The WHO experts said this wider vaccine distribution was needed in part to stop new, dangerous variants from emerging. Dr. Soumya Swaminathan, WHO's chief scientist, said in August that she was "afraid" that booster campaigns "will only lead to more variants."

Other experts have warned of the same scenario for months.

Ken Shadlen, a professor of development studies at the London School of Economics and Political Science, told Insider in March that if global vaccine inequality persisted, "it's going to potentially undermine the health benefits of all that we're doing with lockdowns and vaccines."

He said it wasn't inevitable that a vaccine-escaping variant would emerge if the virus kept spreading, but that "it would take a lot of confidence to believe that it's not going to, if it keeps spreading."

Dr. Michael Osterholm, an epidemiologist at the University of Minnesota who advised Joe Biden on COVID-19 during his presidential transition, expressed the same concerns to Insider in March.

He said that efforts to end the pandemic would be difficult if there was a "largely uncontrolled transmission in the low- and middle-income countries," even if the world's richest nations had done widespread vaccinations.

Countries such as the UK and Germany are restricting travel from a number of African nations in a bid to stop the spread of the new variant.

Wasn’t there an article 7 days ago saying Africa was doing the best.. guess China and Fauci couldn’t let that be- and BAM A NEW VARIANT DETECTED in Africa!

Funny how when Trump mentioned restricting travel from China, Democrats called him xenophobic and racist. Now, their restricting travel from Africa. I bet blacks or anyone from the left won't say nothing. Just like they didn't say nothing about the border being open to everyone else but started sending the Haitians back. Blacks think it's the Republican party that's racist. I think the Democratic Party are the real racist. The media just make it look like its the Republicans.

its all lies being put forward by the CDC and the NIH to justify forcing covid shots on everyone. there is no test for any variants or proof there are any! this is a false flag operation by the government to kill us all!

Omicron is a 'different beast' in kids, but it doesn't seem more dangerous, disease experts say

Although the current COVID-19 vaccines provide a high level of protection against severe disease and death caused by variants of concern (VOC), health experts believe that new vaccines that can prevent infection and transmission are needed. All major COVID-19 vaccines have been developed against the original strain of SARS CoV-2....
PHARMACEUTICALS・6 DAYS AGO
The State

Is ‘deltacron’ real? Why experts say reported coronavirus combo is likely a ‘scariant’

Did coronavirus variants delta and omicron form a “super variant” called “deltacron”?. It’s likely you’ve heard the name by now, but experts are saying the reported COVID-19 variant combination is likely a “scariant.”. “#Omicron and #Delta did NOT form a super variant,” wrote...
SCIENCE・10 DAYS AGO
The Independent

Could Ethiopia’s ‘false banana’ be a wonder crop in face of the climate crisis?

The climate crisis, exacerbated by the Covid pandemic, has increased food insecurity for millions of people, particularly in the Global South.The United Nations warns that over the next 30 years, food supply and food security will be severely threatened if more is not done to tackle global heating, and crops’ vulnerability to increasing extremes such as prolonged droughts, heatwaves, flash-flooding and insect infestations. For example, global yields of both maize and wheat are projected to significantly decline due to climate impacts caused by emissions from fossil-fuel burning. In Africa and Central America, nearly 950 million metric tonnes of maize is...
AGRICULTURE・2 HOURS AGO

Fla. — Experts believe the peak of omicron either is occurring right now or has occurred, as the total number of cases and the number of people testing positive in Florida went down last week. However, they also said new variants could be around the corner, which is...
FLORIDA STATE・4 DAYS AGO
The Guardian

Experts urge development of new vaccines that protect against transmission of the virus in the first place
PUBLIC HEALTH・9 DAYS AGO
hngn.com

Experts Warn for More COVID-19 Variants; Current Vaccines May Not Be Effective Against Upcoming Strains

Scientists caution that Omicron's whirlwind was an advance warning that practically ensures it won't be the last version of the coronavirus to worry the world. Every infection gives the virus a chance to mutate, and Omicron has an advantage over the previous variants of being more contagious even vaccines have been developed previously.
SCIENCE・5 DAYS AGO
The Independent

The UK is in a strong position in the fight against Covid due to successful vaccine rollouts and high degrees of natural immunity, a health expert has said. Sir Jeremy Farrar, director of the Wellcome Trust and former SAGE advisor, was speaking to Sky News ahead of Boris Johnson announcing he would be lifting plan B measures in England. Mr Johnson said in a statement to the Commons that data suggested the Omicron variant had “peaked nationally”. Sir Jeremy said: “I think, particularly in the UK, we can be cautiously optimistic.“I don’t think Omicron will be the last variant –...
PUBLIC HEALTH・2 DAYS AGO

BALTIMORE (WJZ) — As COVID-19 surges across the country, the Omicron variant has taken center stage. Health experts from Johns Hopkins University’s Coronavirus Resource Center said numbers have gone from bad to worse. Beth Blauer, the data lead for the group said, “We’ve had a total of 4.2...
PUBLIC HEALTH・14 DAYS AGO
Telegraph

Other coronavirus variants to be aware of as omicron spreads nationally

As the omicron variant of COVID-19 spreads nationally, breaking records in terms of cases and seeing a spike that experts predict will only continue to increase, a lab in Cyprus recently said they discovered a variant that combined the delta and omicron variants, but scientists have since said that this variant may have been a lab mistake.
PUBLIC HEALTH・10 DAYS AGO
FOX 5 San Diego

What does it mean for COVID-19 to be endemic vs. pandemic?

A look at what endemic means and the implications for the future.
PUBLIC HEALTH・1 DAY AGO
WTAJ

MADRID (AP) — When the coronavirus pandemic was first declared, Spaniards were ordered to stay home for more than three months. For weeks, they were not allowed outside even for exercise. Children were banned from playgrounds, and the economy virtually stopped. But officials credited the draconian measures with preventing a full collapse of the health system. Lives […]
PUBLIC HEALTH・1 DAY AGO

The New Normal: What do we learn as new coronavirus variants emerge?

Vaccines to Africa must have good shelf lives, says expert

ABUJA, Nigeria — (AP) — At least 2.8 million doses of COVID-19 vaccines donated to African countries have expired, the Africa Centers for Disease Control said Thursday, citing short shelf lives as the major reason. Donors of vaccines to the continent should send them with a realistic shelf...
HEALTH・1 DAY AGO
Daily Mail

Covid pandemic is 'nowhere near over' and new variants are likely to emerge, WHO warns, despite cases continuing to plummet in Britain

The Covid-19 pandemic is far from over, the World Health Organization's chief said Tuesday, cautioning against a narrative that the the Omicron variant is risk-free. 'This pandemic is nowhere near over,' chief of the UN health body Tedros Adhanom Ghebreyesus told reporters from WHO's headquarters in Geneva. Tedros warned against...
WORLD・3 DAYS AGO
wibqam.com

Coronavirus spreading like never before in Americas, health agency warns

BRASILIA (Reuters) – COVID-19 infections continue to accelerate in the Americas, reaching new peaks, with 7.2 million new cases and more than 15,000 COVID-related deaths in the last week, the Pan American Health Organization (PAHO) said on Wednesday. “The virus is spreading more actively than ever before,” said PAHO...
PUBLIC HEALTH・2 DAYS AGO

How Will the Next COVID Variant Look? Experts Already Are Looking Ahead

As some health leaders believe a surge in the COVID-19 omicron variant is peaking, a new concern has surfaced: What other variants could coronavirus bring and just how contagious or severe could the infection be?. Doctors and researchers already are looking ahead when it comes to how they plan to...
SAN DIEGO, CA・1 DAY AGO
Business Insider

The cheapest is Egypt's Steigenberger Resort Achti in Luxor. It costs just $40 per night. Let's face it: there's nothing quite like spending the night at a five-star hotel — especially when travelling internationally. The accommodation is luxurious, the sheets are a little softer, the decor is grander, and the service is more refined. Unfortunately, high-end accommodations don't come cheap, and most five-star hotels charge hundreds or thousands of dollars for a single night. However, Top Dollar has put together a map of the most affordable 5-star hotel in almost every country using data from Hotels.com based on a one-night stay for two.
LIFESTYLE・2 DAYS AGO
Newsweek

African nations have been encouraged to refuse vaccine donations if they have only one or two months before they expire.
PUBLIC HEALTH・1 DAY AGO
US News and World Report

It is widely known that COVID-19 poses a higher threat to immunocompromised people – and Africa, which accounts for almost two-thirds of the global total of new HIV infections, holds especially vulnerable populations, forcing the continent to combat two public health emergencies at once. Although the African continent’s HIV...
PUBLIC HEALTH・8 DAYS AGO