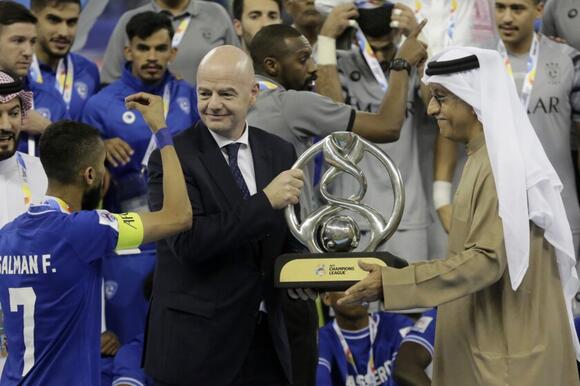 Opponents of the plan for biennial World Cups seem scared of being toppled from the top of world soccer, FIFA president Gianni Infantino said Friday.

Infantino’s speech to African soccer leaders was a clear criticism of the European and South American countries which have dominated every World Cup and are threatening a boycott of biennial men’s tournaments.

“Those who are against are those who are at the top,” Infantino told officials in Cairo at a meeting of the Confederation of African Football.

“It happens in every sector of life, when there are reforms and changes, those who are at the top don’t want anything to change,” said Infantino, who was a long-time senior official at UEFA until being elected FIFA president in 2016. “They are afraid, maybe, that if something changes their leadership position is at risk.”

Europe and South America have provided every team to play in all 21 World Cup finals since the inaugural tournament in 1930, and their historical strength has earned them at least 18 of the 32 entries at next year's World Cup in Qatar.

“We understand that and we compliment and applaud them for having been so successful in reaching the top,” Infantino said. “This is fantastic and they are an example for everyone. But at the same time we cannot close the door (to others).”

Infantino has pushed for biennial World Cups to help other regions develop and close the gap on the traditional powerhouse teams by giving nations more chances to qualify and players more chances to perform on the biggest stage.

No African team has reached the men’s World Cup semifinals and the continent has only five of the 32 entries. That will rise to at least nine when the 48-team tournament debuts in 2026.

An extra men’s World Cup in a four-year cycle would likely add about $3 billion at current levels to FIFA income and increase funding to its 211 member federations and six continental bodies.

“It is our responsibility to keep the dream open to give opportunities to everyone,” Infantino said.

Still, the backlash from all levels of European soccer since FIFA formally detailed its biennial plan in September led Infantino to say last month that any changes must be reached by consensus without doing harm to the game.

European and South American soccer officials see threats to the status of their own continental and domestic competitions, and an increased workload for players.

The International Olympic Committee has also opposed FIFA's plan to double the staging of its biggest tournament, saying it would "undermine the diversity and development of sports other than football.”

Infantino, who is an IOC member, hinted again Friday that a modified or new tournament could be a solution to getting wider support.

“Will it be with the World Cup or will it be in another way?” he told the 54 members of CAF, which is currently the continental body most closely aligned with FIFA. “We have to study, of course, all this.”

Annual 48-team youth tournaments, instead of the biennial World Cups for men and women at under-20 and under-17 level, are also part of FIFA’s plan to develop soccer. It was detailed in Cairo by Arsène Wenger, the former Arsenal coach who is FIFA director of global development.

Infantino warned of losing a generation of youth players whose birth year falls at the wrong time in the current cycle of tournaments.

FIFA has organized an online summit of its 211 members on Dec. 20 to discuss a strategy for future tournaments.

No vote on biennial World Cups is expected next month amid the current opposition, which includes a show of unity by UEFA and South American soccer body CONMEBOL. They have created a shared office that opens in London on Dec. 7.

Ralf Rangnick has no plans to replace Harry Maguire as Manchester United captain, despite Cristiano Ronaldo’s claim that the squad's mentality must improve to avoid a "nightmare" season.In an interview with television broadcasters this week, Ronaldo said that there needed to be a shift in attitude within the Old Trafford dressing room in order for results to improve.The five-time Ballon d'Or winner rejoined United from Juventus in August, having won eight major honours during his first spell at the club between 2003 and 2009, including three Premier League titles and the Champions League.Ronaldo has returned as the oldest outfield player...
PREMIER LEAGUE・2 DAYS AGO
AFP

Ghana captain Andre Ayew dismissed Gabon as a "small team" as a controversial late equaliser saw Friday's Africa Cup of Nations clash between the sides finish 1-1 after title contenders Morocco secured their place in the last 16. Ayew's fine early strike had the four-time champions on course to claim their first win in Group C only for Jim Allevinah to blast in a superb 88th-minute equaliser that put Gabon on the brink of the next round but left Ghana's hopes on a knife-edge. The Black Stars were furious that Gabon scored after opting not to return the ball when Ghana put it out of play as midfielder Daniel-Kofi Kyereh went down injured. "It was very small of them, but then that is how it is with small teams," Ayew said.
SOCCER・2 DAYS AGO

THE FUTURE OF THE US WOMEN'S NATIONAL TEAM: Current and former US soccer stars weigh in on the path to World Cup glory

USWNT legend Julie Foudy and current stars Rose Lavelle and Julie Ertz spoke to Insider about the prospects of the US women's national team.
FIFA・2 DAYS AGO

Aston Villa host Manchester United in the Premier League this afternoon. United left victorious when the two sides met just a few days ago in the FA Cup third round after Scott McTominay struck the game’s only goal inside eight minutes. Ralf Rangnick’s side still have plenty of ground to make up in the league, though, with the club six points adrift of the top four heading into the weekend as Cristiano Ronaldo publicly urged his teammates to improve their attitudes. Follow Aston Villa vs Manchester United LIVEVilla have been showing their own intent in the transfer window with the...
PREMIER LEAGUE・2 DAYS AGO
The Independent

Manchester City and Chelsea meet this afternoon with the hosts looking to extend their lead at the top of the Premier League table to 13 points. Chelsea will be hoping their cup form can inspire their league performances as they look to break a bad run of form, in which the west London side have only managed one win in their last five games. City boss Pep Guardiola will be back on the touchline after missing his side’s FA cup game away at Swindon Town and will be hoping to get one over on his long-time competitor Thomas Tuchel.Follow...
PREMIER LEAGUE・2 DAYS AGO
AFP

Real Madrid will be chasing their first trophy in Carlo Ancelotti's second spell as coach when they face Athletic Bilbao in the Spanish Super Cup final on Sunday, but criticism continues to surround the Spanish federation's decision to stage the tournament in Saudi Arabia. Madrid scraped past Barcelona 3-2 after extra-time in Riyadh on Wednesday before Athletic sprung a surprise by coming from behind to defeat Atletico Madrid 2-1 on Thursday. The annual competition, which includes the top two in La Liga from the previous season, as well as the most recent Copa del Rey finalists, is being played in Saudi Arabia until 2029 as part of a deal that earns the Spanish football federation around 30 million euros ($34.2 million) a year. Amnesty International have asked that players wear purple armbands this week in protest against the treatment of women and the LGBTQ community in Saudi Arabia, a request that was ignored in the semi-final matches.
SOCCER・2 DAYS AGO
The Guardian

Algeria 0-1 Equatorial Guinea: Africa Cup of Nations – as it happened

FIFA says it's approved an amnesty for yellow cards shown in European qualifying games for the World Cup
UEFA・3 HOURS AGO
fourfourtwo.com

Scotland and Wales have received a World Cup play-off boost with FIFA removing all yellow cards picked up in qualifying. Both Scotland boss Steve Clarke and Wales counterpart Robert Page had called for bookings to be wiped clean after securing their place in the play-offs in November.
FIFA・2 HOURS AGO