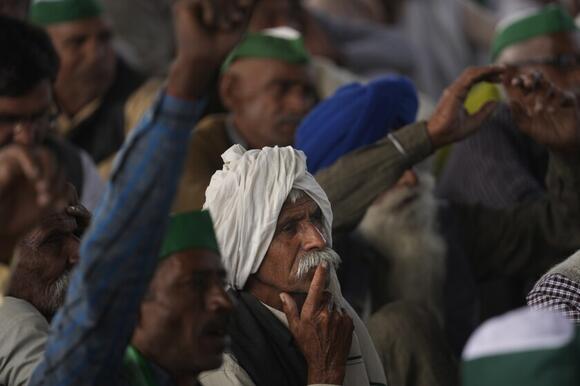 Thousands of jubilant Indian farmers waving green and white flags on Friday marked the anniversary of their movement by celebrating a victory that forced Prime Minister Narendra Modi to withdraw three agriculture laws the farmers feared would drastically reduce their incomes and leave them at the mercy of corporations.

Using tractors, jeeps and cars, farmers from New Delhi's neighboring states last November converged on the highways on the outskirts of the capital, braving a harsh winter, a scorching summer and a devastating coronavirus surge.

Farmer groups are continuing to camp out, mainly at Singhu, Tikri, and Ghazipur border points with New Delhi, waiting for the laws to be officially withdrawn during a parliament session scheduled to begin next week.

Rakesh Tikait, a top farmer leader, said they also want government assurances of guaranteed prices for certain essential crops, like wheat and rice — a system introduced in the 1960s to help India shore up its food reserves and prevent shortages. He demanded that the government set up a committee to settle their demand.

"We are not going away until our other demands are met,'' he said. There was no immediate response by the government.

Lal Kumar, a 42-year-old farmer, said "Modi has accepted defeat." With his low farm income, Kumar said he was not able to look after his family properly.

Farmers worried that the now-withdrawn laws would have left them at the mercy of corporations that would have no legal obligation to pay them guaranteed prices.

For Modi’s government, the demonstrations were its biggest challenge yet. Experts say key state elections in February-March could be a major reason behind Modi’s reversal.

Farmers form the most influential voting bloc in India and politicians have long considered it unwise to alienate them.

Elections next year will cover Uttar Pradesh, India’s largest and most populated, Uttarakhand and Punjab states, where Modi’s party hopes to win them back or shore up its rule. The three states have a sizeable farmer population, particularly Punjab.

Modi’s Bharatiya Janati Party is in charge in Uttar Pradesh but is under immense pressure over its response to the pandemic and the struggling economy. If farmers desert his party, it will not only shrink its prospects to form the state government for a second term but also weaken its chances to get an overwhelming majority in 2024 national elections.

Over the past year, dozens of farmers died due to suicide, bad weather and COVID-19 during the demonstrations, which drew international support.

The protest has been largely peaceful. However, violence erupted on Jan. 26 when thousands of farmers stormed New Delhi's historic Red Fort and briefly took over it over and hoisted a Sikh religious flag. Most are members of the Sikh minority.

At least one protester died, and several were injured, as were more than 390 police officers.

Violence in Germany as thousands protest against vaccine mandates

German riot police were attacked with bottles, fireworks and one was even bitten as more than 35,000 people took part in protests against the government’s coronavirus restrictions and plans to introduce vaccine mandates.While most of the hundreds of protest marches in cities across the country on Monday evening were peaceful, there were attacks against police and journalists in the eastern states of Saxony, where 14 police were injured by protestors, and Saxony-Anhalt, where 40 people were arrested for throwing bottles and pyrotechnics at police in Magdeburg.“One protestor tried to take a police officer’s revolver away from him and another protestor...
PROTESTS・13 DAYS AGO
International Business Times

Thousands marched Tuesday along the beaches of Argentina's Mar del Plata to protest an oil exploration project off the Atlantic coast. Carrying placards reading, "Oil is death", "A sea without oil tankers" and "No to pollution", demonstrators marched to drums, while classical dancers performed. The group oppose a recent decision...
ENERGY INDUSTRY・12 DAYS AGO
Business Insider

VIDEO: Cars torched in Kazakhstan as thousands take to the streets to protest against the government

Quratulain Rehbar was on a public bus in northern India earlier this month when a friend alerted her that her picture had appeared on an app, where she was being advertised as for sale. At first she was numb, she said, but gradually the hurt set in. “It took me...
RELIGION・1 DAY AGO

In a dig at U.S., Chinese leader urges rejection of 'Cold War mentality'

Xi Jinping says China will send 1 billion doses of vaccine to other countries, urging nations to reject 'Cold War mentality' — a subtle swipe at the U.S.
U.S. POLITICS・7 HOURS AGO
The Independent

Hindu monk jailed after calling for 'genocide' of Muslims

Indian authorities have charged a Hindu monk with inciting religious violence after he called for the “genocide” of India's Muslims at a meeting of right-wing supporters, police said Monday.Senior police officer Swatantra Kumar said Yati Narsinghanand Giri, an outspoken supporter of far-right nationalists who also heads a Hindu monastery, was initially arrested on Saturday on allegations that he made derogatory remarks against women. He appeared the following day in a court in the town of Haridwar where he was sent into 14 days of custody for hate speech against Muslims and calling for violence against them.Kumar said the...
RELIGION・14 HOURS AGO
sacramentosun.com

Kathmandu [Nepal], January 10 (ANI): A language is the soul of any nation or society, which is a result of a person's ideas and creative thoughts as well as opinion, said the first secretary of Press Information and Culture, at the Indian Embassy in Kathmandu Naveen Kumar on World Hindi Day here on Monday.
INDIA・7 DAYS AGO
The Guardian

India’s Modi calls for global approach to tackle crypto; FTSE 100 at two-year high – as it happened

Hundreds of thousands of Indians gather for holy dip

Hundreds of thousands of Hindu worshippers gathered on the banks of India's Ganges river on Friday for a holy bathe despite a 30-fold rise in coronavirus cases in the past month. Hindus believe a bathe in the holy river on the Jan. 14 Makarsankranti festival washes away sins.
RELIGION・3 DAYS AGO
crossroadstoday.com

KOHIMA, India (AP) — Hundreds of people walked over 40 miles on Tuesday in India’s northeast to demand the repeal of a controversial act that grants special powers to Indian troops, following a deadly incident last month when soldiers killed over a dozen civilians. They began their protest...
ADVOCACY・5 DAYS AGO
Daily Mail

Several thousand protesters marched in Brussels on Sunday to oppose anti-coronavirus regulations, as European governments mull tighter rules in the face of the omicron wave. There was no repeat of the violence that had marred previous, larger demonstrations in the Belgian capital, although police intervened to surround a small group that approached the EU headquarters.
PROTESTS・8 DAYS AGO
The Independent

2022 elections in India: All you need to know about the polls that will test Modi ahead of 2024

Five states in India are set to go to polls in the next few weeks in a closely watched electoral battle which will be crucial in gauging the popularity of Narendra Modi’s Hindu nationalist Bharatiya Janata Party (BJP) ahead of general elections in the country in 2024.The polls will also test whether opposition parties, largely pushed to reduced numbers in the last few elections with Mr Modi’s rise, can form a united front to challenge him ahead of 2024.Over 180 million voters — more than twice the population of the UK — will be eligible to vote in the upcoming...
ELECTIONS・13 HOURS AGO
Newsweek

The tiger, known as Collarwali, was famous throughout India and gave birth to almost 30 cubs during her lifetime.
ANIMALS・14 HOURS AGO
The Independent

Birju Maharaj, a legend of classical Indian dance and among the country’s most well-known performing artists, died Monday. He was 83. Maharaj was suffering from a kidney ailment and was undergoing dialysis and likely died of a cardiac arrest, his granddaughter Ragini Maharaj told the Press Trust of India news agency. Known as Maharaj-ji by his many fans, he was considered an icon of the kathak form of Indian classical dance and was a recipient of the Padma Vibhushan, India’s second highest civilian award. He was born into a family of renowned kathak dancers and trained under his uncles...
THEATER & DANCE・21 HOURS AGO
Insider

During the partition in 1947, when India and Pakistan became separate states, brothers Sadiq and Sikka Khan were lost to one another.
BEHIND VIRAL VIDEOS・2 DAYS AGO
The Independent

Activists have taken to the streets across the country in “Kill the Bill“ protests, calling on the House of Lords to reject the police, crime, sentencing and courts bill which would restrict non-violent protest.Demonstrations took place in cities including London Bristol Coventry, Newcastle, Liverpool Manchester, Sheffield, Plymouth on Saturday.The action came ahead of a crucial vote on the bill by peers on Monday.Protesters describe it as a draconian crackdown on the right to assembly, freedom of expression and other civil liberties.In London, many hundreds marched from Holborn to Westminster, chanting “kill the bill” and carrying placards reading...
PROTESTS・2 DAYS AGO
Newsweek

The passengers were tested after landing in Amritsar, northern India, on a chartered flight from the Italian city of Milan.
WORLD・11 DAYS AGO
The Independent

The mass protests in Kazakhstan began peacefully over the New Year's weekend, with marchers denouncing a sharp rise in fuel prices. They spread quickly from the western part of the Central Asian nation to more populous areas, eventually reaching its largest city of Almaty But something changed over the course of a week.Groups of armed men appeared in Almaty, with some seen riding in cars without license plates or with their faces covered. Marchers at the peaceful protests say these men began urging them to storm government buildings, promising to give them guns.Clashes with police soon broke out, and...
PROTESTS・2 DAYS AGO