Get the latest breaking news, sports, entertainment and obituaries in Athens, GA from Online Athens.

When the cause is right: In Chanukah, we see God's hand in history 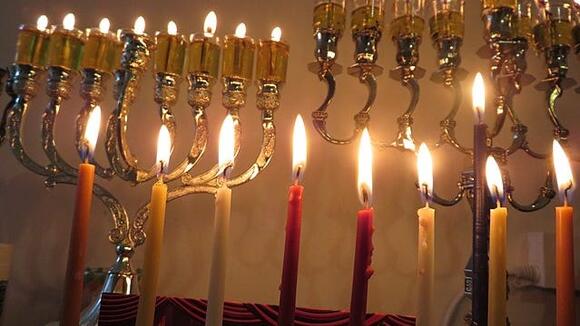 At this time, we Jews have come to Chanukah, our festival of lights.

In the words of the bizarre Adam Sandler song — well known now — "Put on your yarmulke, it's time for Chanukah!"

While technically a minor holiday, Chanukah commemorates an important historic event for Jews. It harks back to 168-165 B.C. in Israel, and the defeat of the oppressive Greek Syrians by the Jewish fighters (Maccabees). With that victory, the Maccabees rededicated the Jerusalem Temple and set up a Jewish state in Israel.

In this battle, the Jewish fighters were greatly outnumbered. But, their cause of religious freedom was right in God's eyes. That is what motivated the Maccabees.

As related in the Apocryphal Book of Maccabees, the Maccabean leader, Judah Maccabee, encourages his military followers in this way:

"When the people feared and trembled at the sight of the great number of the enemy, and said: 'How can we, few as we are, fight against so great and strong a multitude?' Judah replied: 'In the sight of Heaven there is no difference between saving by many or by a few. We fight for our lives and our laws.'" (I Maccabees)

Chanukah is a blueprint for history. So many times, righteous movements are a relatively small group, but eventually, they triumph because the cause is just and God is working.

The outgrowth of the Maccabees, the modern state of Israel, followed this pattern. Zionism took place with a few pious Jewish settlers at the end of the 19th century and the work at that time of the beleaguered leader Theodore Herzl. Always outnumbered, with immigration and military struggle and God's help, this evolved into Israel as we know it today.

Here in this country, beginning in the 1950s, the civil rights movement took place with a relatively small group of African Americans who refused to be second-class citizens — on buses, at lunch counters and other venues. But, again, the cause was right in God's eyes, and with brilliant leaders like Martin Luther King Jr., so much was accomplished.

And this phenomenon occurs on the international level as well. As an example, in communist Poland in the 1980s, the activist in the shipyards, Lech Walesa, led the rather small pro-democratic Solidarity Movement. But again, the cause was a just one, as seen by God. And by 1989, Poland was a free nation, leading at that time to the fall of communism throughout Eastern Europe and in the Soviet Union.

So, harking back to the Maccabees and the Chanukah event, we see God's hand in history. Sometimes, we may have a difficult time perceiving the presence of God, even though there are many different signs of His work — healing, majestic nature, friendship and others. But, what I have related here — the triumph of good when the strugglers are few — is truly important evidence of His work.

So, with that great Chanukah teaching, may I wish all my readers happy winter holidays — whatever one you observe. Be safe, and enjoy!

Ronald Gerson is rabbi emeritus of Congregation Children of Israel in Athens.

One of my common sayings lately is that common sense is not common anymore. It is a new year and we all could use more of God’s wisdom for whatever this year holds. A Bible teacher years ago defined wisdom as seeing life from God’s perspective. Don’t you wish you had God’s viewpoint? Because He sees the whole picture from beginning to end.
RELIGION・8 DAYS AGO
byfaithonline.com

Seeing the Christian Disciplines as Bread for Our Souls, not Bribes for God’s Blessing

As the New Year begins, many Christians will launch into resolutions that include attempts to improve their walk with God – daily Scripture reading, a more disciplined prayer life, more regular church attendance. One barrier to the resolutions becoming routine is the burden of guilt we needlessly attach to these Christian disciplines.
RELIGION・7 DAYS AGO
Norman Transcript

Faith: Where is God when it hurts?

One of the great comforts of the Christian faith is that God is intimately involved with His creation. In addition to being comforting, such a statement may be one of the most contested features of the Christian faith. Why is that the case? It unapologetically proclaims that every human exists first and foremost as a creature in God’s world. We are not the center of the universe. Instead, we are finite existing within the boundaries established by our infinite God.
RELIGION・10 DAYS AGO

Minister's Corner: Where's God when you have cancer?

A man goes to his doctor for his annual checkup. After a taking a number of tests, the doctor comes back with the test results. The doctor tells him, “I have some bad news. You have cancer and Alzheimer’s.” The man replies, “Well, that’s a relief. At least I don’t have cancer.” You may find the joke funny, ridiculous, or offensive. But this is exactly what happened with my father in 2009. Sometimes I have to laugh so I don’t cry.
RELIGION・1 DAY AGO
gilroylife.com

Guest column by Naka Elelleh: When we all decide what is right, we can influence the world around us

Being Black in America means getting desensitized to a lot of things. When I first watched the video of George Floyd dying as his neck was being pressed down by Minneapolis Police Officer Derek Chauvin for nearly nine minutes, I felt an unquenchable rage. I wanted justice. Ever since I...
GILROY, CA・3 DAYS AGO
The Independent

Voices: My Jewish father taught me to use a gun for self-protection. I didn’t think I’d have to teach my own son

Pop pop pop! The rifle kicked back powerfully as my dad showed my sister and I how to use a gun on a desolate gun range in the Arizona desert. This was decades ago.“It’s not a toy. It’s a serious piece of equipment. Never point it at anything or anyone unless you are prepared to completely destroy it, because that is what guns do,” he explained, with a grave look on his face.My parents, both military veterans (my dad was in the American army and my mom was a sergeant in the Israeli army) explained to my sister and I...
EDUCATION・11 HOURS AGO
USA TODAY

Colleyville standoff: Martin Luther King taught us how Jews and Muslims can live together

Division is not a value of any faith. The extremists of all tribes belong to only one tribe – the tribe of extremism.
MONTGOMERY, AL・12 HOURS AGO

Haverhill Church Offers Free Screening of ‘God’s Not Dead: We the People’

Changing Lives Christian Church in Haverhill is having a free movie night, featuring the film “God’s Not Dead: We the People.”. The screening takes place Saturday, Jan. 15, 6 p.m., at the church, 17 Newcomb St., Haverhill. There will also be free popcorn, coffee and tea and pastries.
HAVERHILL, MA・12 DAYS AGO
The Independent

Hindu monk jailed after calling for 'genocide' of Muslims

Indian authorities have charged a Hindu monk with inciting religious violence after he called for the “genocide” of India's Muslims at a meeting of right-wing supporters, police said Monday.Senior police officer Swatantra Kumar said Yati Narsinghanand Giri, an outspoken supporter of far-right nationalists who also heads a Hindu monastery, was initially arrested on Saturday on allegations that he made derogatory remarks against women. He appeared the following day in a court in the town of Haridwar where he was sent into 14 days of custody for hate speech against Muslims and calling for violence against them.Kumar said the...
RELIGION・17 HOURS AGO
Newsweek

The team, which has been looking into the mystery for six years, named Jewish businessman Arnold van den Bergh as the person who revealed where she was hiding.
NETHERLANDS・18 HOURS AGO
Newsweek

Civil Rights leader Martin Luther King Jr was a driving force social justice and racial equality and left an enduring legacy which is still felt today. Here are some of his most inspiring quotes.
SOCIETY・19 HOURS AGO

The interesting history of the real name of Martin Luther King Jr. – and why it was changed

"Martin Luther King" was not his given name. What was it originally — and why did his father change it?
RELIGION・16 HOURS AGO
Insider

8 powerful speeches from Martin Luther King Jr. that aren't 'I Have a Dream'

From his oddly prophetic final speech to his inspirational Selma talk, these are some of MLK's famous but often overshadowed speeches.
POLITICS・14 HOURS AGO
Newsweek

What to Listen To on the Day Martin Luther King Jr. Is Remembered

King was fearless—and fearless because he was faithful—and dangerous to the segregationists. He answered to a higher authority.
POLITICS・23 HOURS AGO
Newsweek

On this Martin Luther King holiday, we should heed Dr. King's prophetic reminder that "the vote is the most powerful instrument ever devised by human beings for breaking down injustice and destroying the terrible walls which imprison people because they are different from others."
PRESIDENTIAL ELECTION・15 HOURS AGO
NewsOne

Martin Luther King’s Most Iconic Speeches Of All Time

"It doesn't take much effort to see that if there's a thing that defines this time right now, it seems to be anger," says Bishop Hughes. "Who are we to be in the midst of that? How are we to be God's emissaries? How are we to be the witnesses of God's love in this time that we're in?" (Time: 4:48.)
NEWARK, NJ・12 DAYS AGO
Shropshire Star

The far-right terrorist killed 77 people in a bomb and gun massacre in Norway in 2011. Norwegian mass killer Anders Behring Breivik will seek parole on Tuesday after 10 years behind bars, claiming he is no longer a danger to society. The far-right terrorist has shown no remorse since murdering...
PUBLIC SAFETY・20 HOURS AGO
restorationnewsmedia.com

Look up to see God’s creation in the sky

Santa was good to me. Even though my parents as Santa didn’t have much money, they shopped for nice presents to give my sister and me. One year, my sister and I asked for bicycles, and my parents bought them for us. However, one Christmas I was disappointed with Santa.
RELIGION・8 DAYS AGO

Get the latest breaking news, sports, entertainment and obituaries in Athens, GA from Online Athens.